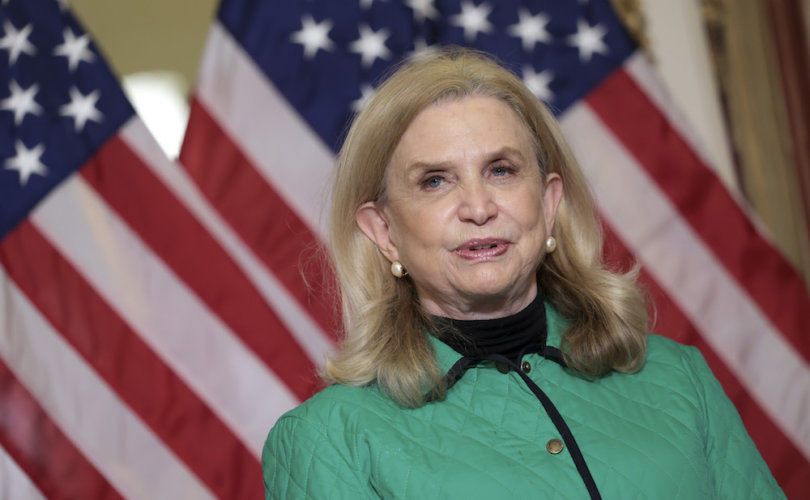 (LifeSiteNews) – Democratic U.S. Rep. Carolyn B. Maloney of New York singled out “Drag Queen Story Hour” for praise in a tweet last week as she denounced the banning of books across the country.

“Across the country, books are being banned, which are depriving our nation’s youth. But thanks to @NYPL and programs like Draq [sic] Queen story hour, NYC’s next generation are getting a well rounded education about LGBTQ+ issues and gender identity,” Maloney tweeted.

Drag Story Hour NYC, a citywide branch of its global parent organization, involves local drag performers reading picture books, singing songs, and teaching drag “as a form of dress up and play” to children as young as three, according to the group’s website. One of its self-proclaimed goals is to teach children to “learn to see beyond the pink and blue gender binary and celebrate difference in themselves and others.”

Jim Hanson tweeted the hashtag “#OKGroomer” — a play on the dismissive catchphrase “Ok Boomer” — and commented, “Anyone who thinks Drag Queen Story Hour is a good idea for young kids Has no business being in charge of kids.”

“Found another groomer outing themselves,” wrote Steve Deace, of BlazeTV’s “Steve Deace Show,” in a retweet of Maloney’s remarks.

In 2018, drag queen Dylan Pontiff admitted to a committee that drag queen story hour events are deliberately for “grooming” the next generation to accept LGBT ideology.

“This is going to be the grooming of the next generation. We are trying to groom the next generation,” said Pontiff, who when dressed in drag goes by the name Santana Pilar Andrews, to Louisiana’s Lafayette City-Parish Council during a Sept. 17, 2018 meeting.

The meeting was to consider a motion to denounce the drag queen story hour proposed for the local library as not being age-appropriate.

The increasingly prevalent “Drag Queen Story” events have come under fire not only for their LGBT indoctrination of impressionable children, but for putting convicted pedophiles and prostitutes in close proximity to children, prompting a Kansas library board’s 2019 proposal to automatically bar registered sex offenders from participating in public library presentations.

UK Drag Queen Story Hour was even accused of explicitly endorsing pedophilia in 2020 when it tweeted a photo of a gleeful man wearing a rainbow suit and wielding a rainbow umbrella with the pro-pedophilia message “Love has no age!” The tweet was deleted shortly after people started to point out the phrase, which is frequently used by pedophiles.

As in other “Drag Story Time” host locations, books celebrating cross-dressing and transgenderism are included in the New York City program, such as “The Hips on the Drag Queen Go Swish Swish Swish,” “The Dragtivity Book,” and “Born Bad,” in which a wolf finds encouragement in a Reef Frog who was “once a girl and is now a boy,” among other animals, according to a reviewer.

Referencing Maloney’s Twitter complaint about the banning of what she suggests are LGBT books, one Twitter user sarcastically remarked, “For some reason people don’t like pornographic books designed for grooming being marketed to children’s libraries.”

Business Insider has recently reported on a spike in book bans across the country over the past nine months, many of which have been enforced to protect children from exposure to LGBTQ themes and indoctrination during middle school, high school, and even elementary school, where LGBTQ-themed books are often included in libraries and classrooms.

Two such books found in public schools, Gender Queer: A Memoir by Maia Kobabe and Lawn Boy by Jonathan Evison, include hardcore homosexual pornography as well as depictions of pedophilia. In addition to graphic language, the books contain nudity and illustrations of various sex acts and other sexual themes.

Maloney, who chairs the House Oversight Committee, has denounced those criticizing her praise of “Drag Story Hours” and LGBTQ education as “bigots.”

A longtime leftist politician and defender of homosexuality, Maloney introduced the first measure in New York to recognize domestic partnerships, including those of same-sex couples, in 1990.