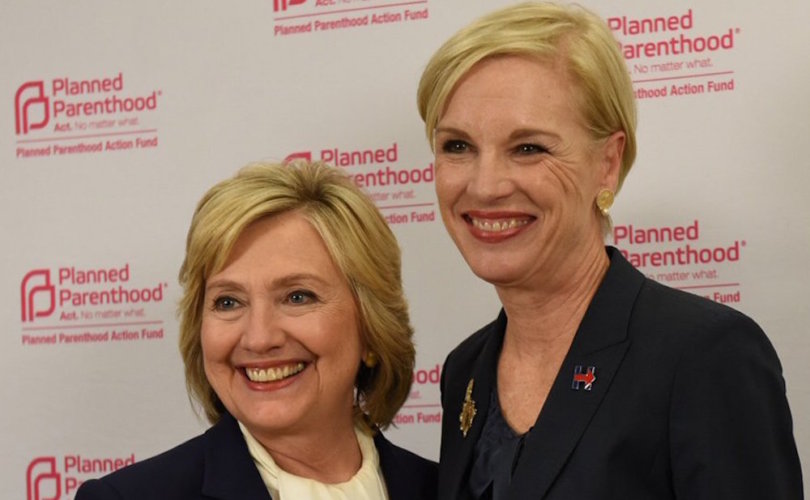 PHILADELPHIA., July 1, 2016 (LifeSiteNews) – The Democratic Party will officially “champion” Planned Parenthood in its 2016 party platform and demand that laws protecting taxpayers from funding abortion-on-demand be repealed, if the final draft is adopted next week.

“The platform goes further than previous Democratic platforms on women’s reproductive rights. It champions Planned Parenthood health centers and commits to push back on all Republican efforts to defund it,” the Democratic Party announced in an official press release.

“The platform also vows to oppose, and seek to overturn, all federal and state laws that impede a woman’s access to abortion, including by repealing the Hyde Amendment,” the law signed by President Jimmy Carter in 1977 that bars Medicaid funding of elective abortions.

The draft language, approved by delegates hand-selected by candidates Hillary Clinton and Bernie Sanders, also calls for the repeal of the Helms Amendment, which prevented U.S. taxpayers from underwriting abortion around the world.

If the 2016 final draft language is implemented, the platform “will usher in an era of unsafe abortion paid for with taxpayer funds during all nine months,” Kristen Day, the executive director of Democrats for Life, told The Daily Caller.

This would represent “the most extreme pro-abortion platform in history,” she said.

The Democratic Party officially embraced abortion-on-demand in its 1980 platform, which stated, “The Democratic Party supports the 1973 Supreme Court decision on abortion rights as the law of the land and opposes any constitutional amendment to restrict or overturn that decision.”

Bill Clinton repeatedly said he believed abortion should be “safe, legal, and rare” during his two bids for the presidency, and the Democratic platform officially adopted the goal of making abortion “less necessary and more rare” in 1996.

The party platform endorses taxpayer-funded abortion-on-demand throughout all nine months of pregnancy.

“The Democratic Party strongly and unequivocally supports Roe v. Wade and a woman’s right to choose a safe and legal abortion, regardless of ability to pay,” the 2008 and 2012 platform planks state.

The current draft language must be approved by the full platform committee at its meeting on July 8 and 9 in Orlando, in advance of the Democratic National Convention in Philadelphia on July 25-28.