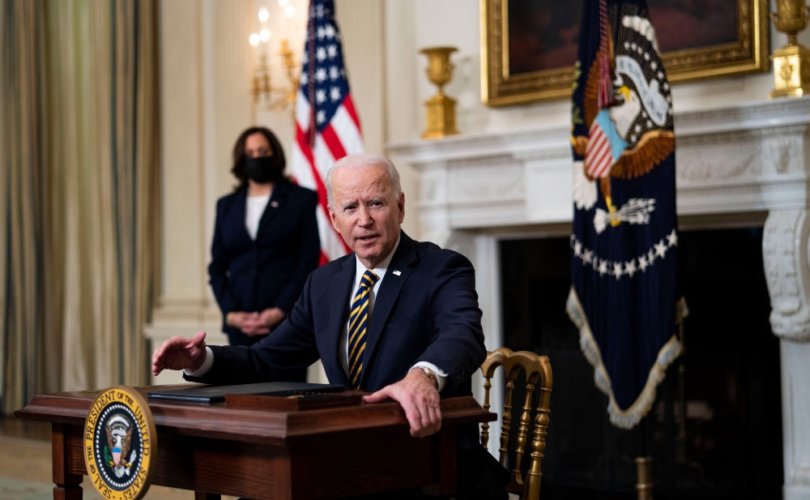 WASHINGTON, D.C., March 1, 2021 (LifeSiteNews) – Over the weekend, the Democrat-controlled U.S. House of Representatives passed a COVID-19 relief bill which aims to use taxpayer money to fund abortions and the abortion industry under the guise of coronavirus relief.

“Now, the bill moves to the United States Senate, where I hope it will receive quick action. We have no time to waste,” said Joe Biden, the most pro-abortion president in U.S. history. The Washington Post called the measure “the White House’s first major piece of legislation.”

The massive funding bill, unlike previous COVID-19 relief legislation, excluded Hyde Amendment protections, meaning that there are no safeguards against over $400 billion from being used to cover elective abortions.

“In addition, their bill creates a $50 million slush fund for Planned Parenthood – which violently ends the lives of more than 354,000 unborn children a year – and changes the rules for small business funding so that the abortion giant can tap into that money as well,” noted Dannenfelser.

“This divisive move flies in the face of the ‘unity’ this administration promised to promote. The majority of Americans, including millions of Democrats and Independents, oppose using tax dollars to fund abortion and bail out the abortion industry,” continued Dannenfelser, who noted that U.S. Reps. Jackie Walorski, Cathy McMorris Rodgers, and Virginia Foxx had spearheaded efforts to apply pro-life Hyde Amendment protections to the bill.

“As we discuss these issues that are central to our nation’s recovery, it’s difficult to comprehend why the COVID-19 Relief Bill that we are considering today [gives] millions of dollars for Planned Parenthood and other abortion providers,” noted Rep. John Joyce (R-PA), a medical doctor who is a member of the U.S. House Commerce Committee, commenting on the proposed COVID Relief Bill last month.

“This is not the time to play politics… It would be malpractice to allow funding intended for COVID-19 relief to pay for access to abortion.”

— Article continues below Petition —
U.S. Senators: Don't use new relief bill to fund abortion!
Show Petition Text
8837 have signed the petition.
Let's get to 9000!
Thank you for signing this petition!
Add your signature:
Show Petition Text