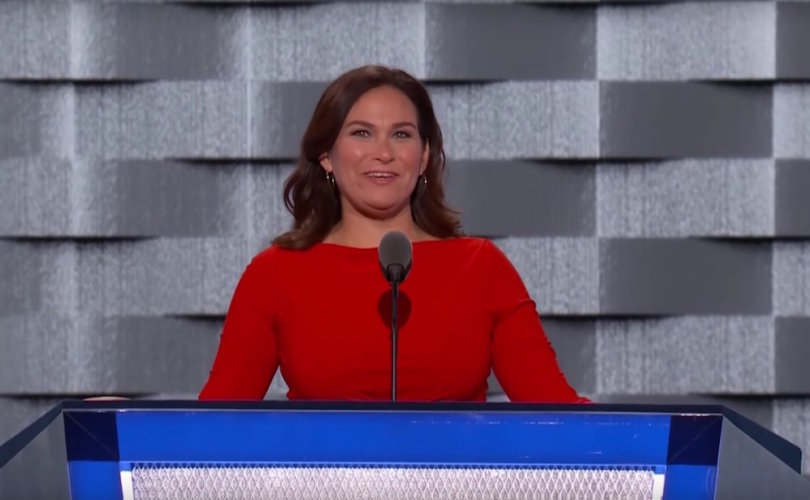 PHILADELPHIA, July 28, 2016 (LifeSiteNews) – As the president of NARAL Pro-Choice America announced that she had an abortion, thousands of delegates erupted into cheers at last night’s Democratic National Convention.

Ilyse Hogue told the enthusiastic crowd that she was “fortunate” to have received a “compassionate” abortion, and to preserve abortion-on-demand, “We need Hillary Clinton.”

Hogue said she enjoyed broad trust and opportunity “when I found out I was pregnant years ago.”

“I wanted a family, but it was the wrong time. I made the decision that was best for me – to have an abortion,” she said as Democratic elected officials, party leaders, and grassroots activists burst into applause.

Hogue has previously said in public that she got pregnant due to “contraception failure” and had an abortion in order to achieve her “dreams.”

She felt she was “fortunate” to be “able to get compassionate care at a clinic in my own community” in Texas.

“It’s not as simple as bad girls get abortions and good girls have families,” she said. “About one in three American women have abortions by the age of 45.”

In a fact-check after the speech, The Washington Post gave the statistic two Pinocchios, noting the decline in abortions since the Guttmacher Institute – which was launched as the research arm of Planned Parenthood – released the figure in 2008.

Pro-life advocates have questioned the figure, saying it is likely closer to one-in-four. “Until early 2017, when the Guttmacher Institute plans to release the updated findings, this “one in three” figure should be treated with caution,” the Post concluded.

She went on to say the pro-life movement is composed of male chauvinist control freaks determined to reduce women to second-class citizenship.

“The people who so loudly oppose abortion rights” have a “dirty little secret: They're not only against abortions. Many of these people are also fighting to restrict access to contraception and block commonsense policies to support working moms,” Hogue said.

“It's not abortion that bothers them,” Hogue continued. “It's empowering women to live our own lives.”

The role of government, she said, is to “keep out of our business when we're not ready to parent and support us when we are,” she said.

Such policies – which NARAL lists as abortion-on-demand, “free” contraception, and feminist economic policies – are “the very foundation of our freedom,” and enacting them honors “our most cherished traditions of liberty and equality,” she said.

Such policies can themselves become a minefield, as Bernie Sanders discovered. He supported paid family leave, a policy favored by Clinton and Hogue, but said in a debate last October that it should be implemented so a new mother can “stay home with that baby.”

Hogue publicly scolded Sanders – who reverted his party status back to Independent this week – saying, “I was like, 'Stop saying that. It's 2015!'”

At the Wells Fargo Center last night, Hogue strongly endorsed Hillary Clinton, whom she said “has spent decades fighting” alongside NARAL, but “Donald Trump is different.”

“He said women who have abortions, like me, should be punished,” she said, repeating a message pounded home numerous times over the three days of the DNC so far.

She then repeated her own catchphrase about the Republican ticket, saying, “Together, Donald Trump and Mike Pence have united to form the ‘Make Misogyny Great Again’ ticket.”

“We need a president who will keep expanding the frontiers of freedom for all Americans,” she said. “We need Hillary Clinton.”

Vox magazine applauded Hogue’s speech, saying that “talking about abortion like it’s a normal part of a woman’s life, which for many it is, is one way” to combat abortion “stigma.”

Even pro-life critics said the speech revealed the true status of the Democratic Party in 2016.

“My only regret is that her speech was not given during prime time – it really should have been,” said Bill Donohue of the Catholic League.

Speeches at the Democratic National Convention by “abortion advocates” like Hogue, Cecile Richards, and Stephanie Schriock “are not an anomaly,” he said. “Indeed, they are very much in step with the Democratic Party platform,” which removed 1990s-era language calling for abortion to be “rare,” promises to “stand up” for Planned Parenthood, and calls for taxpayer-funded abortion around the world.

NARAL president: I had to abort my baby so I could achieve my ‘dreams’