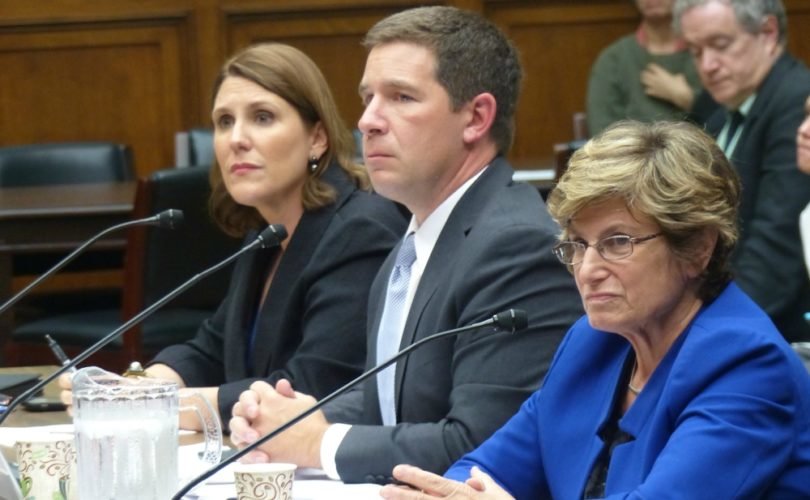 Speaking over top of the whole clip, she said, “Mr. Chairman, I have to object to this. You don’t have any context for this. What we understand from all of the investigations is that these are manufactured videos, highly edited, selective, and I would object and say you need to run these by the minority so that we can provide some context.”

According to Breitbart's Austin Ruse and an observer who spoke to LifeSiteNews, Democrats huddled to discuss the showing of the videos before raising the point of order.

Pitts ignored the interruption, which caused a male Democrat to demand a response. Pitts said that because the first Democrat had not raised a point of order, he was going to ignore the complaint.

Democrats did not further interrupt, though they shifted tactics, decrying the video as “deceptive” and attacking CMP's credibility. They also said the videos themselves were edited, despite more than 40 hours of complete interviews and full transcripts placed online by CMP.

One of the clips shown was edited — because CMP spliced an image of a stillborn child into the video to show what children targeted by Planned Parenthood's fetal harvesting program look like. This was well-known before the hearing, as was the fact that CMP's videos have been edited to eliminate bathroom breaks and similar inconsequential clips of time.

Subcommittee Ranking Member Gene Green, D-TX, said, “Frankly, this is unprecedented what you’ve done. … I think this is a new low for our committee. We can’t question this video.” Declaring CMP a “shadow” group, he cited a committee report showing that the committee's incomplete investigations had not yet shown that Planned Parenthood committed illegal abortions or illegal fetal harvesting. He said the video contained “doctored evidence … and now it’s been presented by our chair of our committee.”

Oversight Subcommittee Tim Murphy, R-PA, told Green and Rep. Janice Schakowsky, D-IL, that the subcommittee's investigation is not complete. The subcommittee is in “preliminary” stages of investigation, he said, noting that “some documents have been obtained, others will be sought.”

“It is our shared responsibility to collect the facts and present” sound “information to the U.S. public,” said Murphy. “We simply can't conclude that there has been no wrongdoing.”

Americans United for Life President Charmaine Yoest, who testified at the hearing, told Republican Rep. Marsha Blackburn of Tennessee that while the 2002 law bans killing babies born after a botched abortion, no punishments are affiliated with the law. She said that “the burden of proof is on Planned Parenthood” to show that “this is not happening,” especially in light of what she said are examples of babies either being killed or denied care.

Yoest specifically cited Susan B. Anthony List National Campaign Chair and pro-life blogger Jill Stanek as an example of someone who saw a botched abortion lead to a baby being denied care.

The second bill is the “Protect Infants from Partial Birth Abortion Act”, which targets individuals and organizations that are suspected of engaging in partial-birth abortions for a loss of funding.