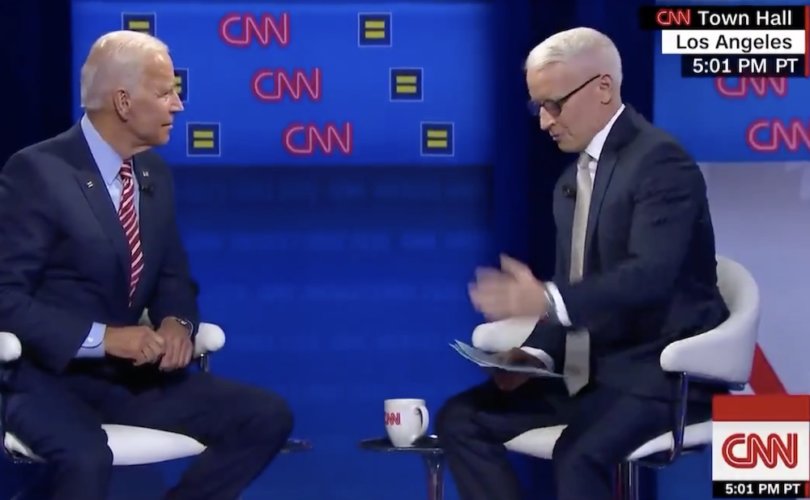 October 11, 2019 (LifeSiteNews) – Nine Democrats vying for the party’s 2020 presidential nomination appeared on CNN Thursday evening for a series of town halls exclusively on LGBT issues, during which they differed little but promised to deliver on left-wing activists’ full wishlist of policy demands.

Sen. Cory Booker of New Jersey was the first on the docket. He touted his sponsorship of the so-called Equality Act, said he “absolutely” supports eliminating limits on homosexuals donating blood, and declared that religious organizations shouldn’t be allowed to “discriminate” against LGBT Americans, but refused to specify whether he would seek to remove their tax-exempt status.

Sen. Cory Booker says he once held negative views about gay people in part because he grew up “as a young man in a toxic environment of football and the like.”

He said he's proud of an op-ed he wrote at Stanford explaining his evolution. #EqualityTownHall https://t.co/PHwU9IsVMN pic.twitter.com/1waPASCBfG

He also answered a question about anti-gay violence from a survivor of the 2016 Pulse Nightclub shooting – which was committed by a self-declared devotee of the Islamic terror group ISIS – by declaring “right-wing extremist” and “white supremacist” violence a “national emergency.”

Next came former Vice President Joe Biden, whose segment began with a question from Judy Shepard, mother of Matthew Shepard (whose 1998 murder made him a national LGBT martyr despite significant questions as to what role, if any, his homosexuality actually played in the crime).  She accused the Trump administration of fueling anti-LGBT hatred, and asked Biden how he would reverse course.

Biden answered that “first and foremost” he would enact the Equality Act, then added he would more aggressively monitor domestic extremist groups, support redefining federal nondiscrimination language to include sexual orientation and “gender identity,” and use the bully pulpit to “constantly remind people of what the facts are.”

“The American people are better than we give them credit for,” Biden added, but “we allow the homophobes to be able to control the agenda.”

Judy Shepard, the mother of Matthew Shepard, asked Joe Biden what he would do to reduce hate crimes against the LGBTQ community.

“He just looked at me, he said 'it's simple, honey. They love each other. It's just basic.'”@JoeBiden shares what his dad told him after he first saw two men kiss.

Biden says his upbringing lead to his vocal support of same-sex marriage while Vice President.#EqualityTownHall pic.twitter.com/kD792fkOsr

Much of Biden’s performance consisted of recounting anecdotes, including a claim that his acceptance of homosexuality started when he witnessed two men kissing as a child. Biden said his father explained it by saying, “they love each other; it’s that simple.”

Biden, who identifies as a Catholic despite an absolutist pro-abortion stance, also suggested faith and pro-LGBT dogma were consistent because Catholic Ireland “was the first country in the history of the world to change their constitution to protect same-sex marriage.” He also claimed, “Gay couples are more likely to stay together longer than heterosexual couples,” a claim that appears to be based in a 2018 study out of UCLA’s Williams Institute, but conflicts with other research on the subject.

Following Biden was former South Bend, Indiana Mayor Pete Buttigieg, whose segment was interrupted before he got a chance to speak by activists waving a transgender flag and shouting “trans lives matter.” Buttigieg and host Anderson Cooper both commended them for calling attention to what the former called the “epidemic” of anti-trans violence.

The left-wing homosexual activist group Human Rights Campaign (HRC) reports “at least 26 transgender people fatally shot or killed by other violent means” in 2018 (the total number of murders in the U.S. the year before was 17,284), but their list admits there were no suspects in at least two of the cases (meaning the motive is unconfirmed) and is vague about the details of several others. The Federalist’s Chad Felix Greene has detailed how pro-LGBT media misrepresented three 2019 trans murders so far as examples of “transphobic” violence when the evidence indicates they were killed for unrelated reasons.

Buttigieg went on to endorse the Equality Act because, even if the Supreme Court sides with the LGBT lobby in its current case, it would only be the start of eliminating “discrimination” in the workplace and public accomodations. He also called the transgender military ban an “outrage,” said he would “direct the FDA to revise” the rules on homosexual blood donation “without regard to the prejudice that has driven the current policy,” and called for changing laws that criminalize the failure to inform a sex partner of one’s HIV status, so long as the viral load was untransmittable.

Buttigieg also addressed his own homosexuality, which he claimed was not sinful (without attempting a Scriptural defense of the claim). “Without telling others how to worship, the Christian tradition that I belong to instructs me to identify with the marginalized and the greatest thing that any of us has to offer is love,” he said, claiming that a traditional Christian understanding of homosexuality “makes God smaller.”

Sen. Elizabeth Warren of Massachusetts spoke next, first taking a question from an audience member about how she would respond to a potential voter who said, “my faith teaches me that marriage is between one man and one woman.” She responded by mocking the idea that the perspective was worth respecting or seriously engaging at all.

Warren endorsed spending taxpayer dollars on sex-change surgery for prison inmates, apologizing for a “bad answer” when she took the opposite stance in 2012. But the most significant portion of her segment came during an exchange with Jacob Lemay, who was introduced as a “9-year-old transgender American.” Lemay’s question concerned anti-LGBT bullying, to which Warren pledged she would seek the child’s approval before nominating a Secretary of Education. She also said she considered teaching children about homosexuality and “gender identity” to be normal parts of public education.

The next segment was devoted to Sen. Kamala Harris of California, whose very first remarks after thanking host Chris Cuomo were, “my pronouns are she, her, and hers.” She touted her record of establishing a hate crimes unit as a San Francisco prosecutor, and promised to “end” HIV/AIDS “within a generation” as well as tackle LGBT homelessness.

CNN's Chris Cuomo mocks her: “Mine too!” pic.twitter.com/aXX3HNkVLp

Biden narrowly leads Warren 27.8% to 26% in RealClearPolitics’ polling average, followed by Sen. Bernie Sanders of Vermont with 15%, Buttigieg with 5% and Harris with 4%.