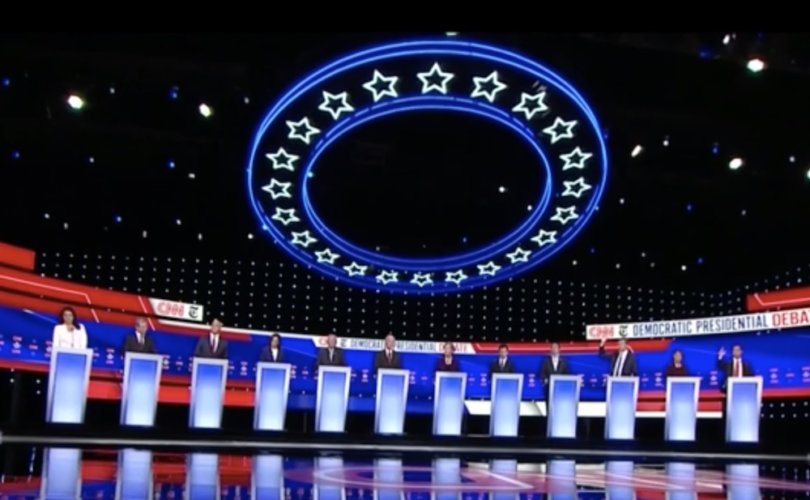 WESTERVILLE, Ohio, October 16, 2019 (LifeSiteNews) – Twelve of the candidates vying for the Democrat Party’s 2020 presidential nomination gathered in Ohio on Tuesday night for a debate sponsored by CNN and The New York Times (video, transcript) during which multiple candidates took pains to cast themselves as the strongest ally to abortion-on-demand.

Sen. Elizabeth Warren, who has recently been closing in on former Vice President Joe Biden for frontrunner status according to some polls and analysts, claimed that overturning Roe v. Wade would return America to a world where “rich women still got abortions, because they could travel,” while abortion would be denied to “14-year-olds who were molested by a family member.” In fact, there is documented evidence of rapists taking young victims to have abortions in order to hide and continue their abuse.

Biden, Warren, Sens. Cory Booker and Amy Klobuchar, Rep. Tulsi Gabbard, and former Housing & Urban Development Secretary Julian Castro all reiterated their support for legislation to codify a “right” to abortion in federal law. Booker and Sen. Kamala Harris also touted their proposals to create a “White House Office of Reproductive Freedom” and to have the Justice Department review state pro-life laws before they can take effect.

“Because the reality is that while we still have — as I said earlier — these state legislators who are outdated and out of touch, mostly men who are telling women what to do with their bodies, then there needs to be accountability and consequence,” Harris said. “Women have been given the responsibility to perpetuate the human species. Our bodies were created to do that. And it does not give any other person the right to tell a woman what to do with that body.”

“When you've got three out of four Americans supporting it, we should be able to get that passed through Congress,” Warren said. “We should not leave this to the Supreme Court. We should do it through democracy, because we can.”

Polls have found that support for Roe and its abortion protections drop dramatically when respondents are informed of what the ruling actually does and that babies’ hearts start beating as early as six weeks.

Some of the candidates tried to frame abortion in racial and class-warfare terms, with Booker claiming that pro-life laws are “another example of people trying to punish, trying to penalize, trying to criminalize poverty, because this is disproportionately affecting low-income women in this country;” and Harris claiming that “poor women, women of color will die, because these Republican legislatures in these various states” are passing abortion bans.

Gabbard, whom some pro-lifers have been trying to cast as an abortion moderate, said abortion should be “safe, legal, and rare” (a once-standard Democrat line the party has abandoned in recent years), and endorsed limiting abortion to the first two trimesters, provided there are third-trimester exceptions for “life or severe health consequences.”

But she also endorsed “codifying Roe v. Wade,” and repeated the talking point that “a woman who has a miscarriage past that six weeks could be imprisoned” under heartbeat laws, despite the fact that the Georgia and Alabama laws expressly reserve punishment for abortionists, not women.

All of the candidates have also pledged to appoint pro-abortion justices to the Supreme Court, but one rare area of disagreement revolved around proposals to increase the number of seats from the current nine. Mayor Pete Buttigieg of South Bend, Indiana, defended a plan to have 15 Supreme Court justices, five of whom could “only be appointed by unanimous agreement of the other 10.”

Biden expressed concern that each party would simply add justices whenever it regained power, and Castro suggested the “smarter move might be to look at term limits or having people cycle off from the appellate courts so that you would have a replenishment of perspective.” Warren declined to answer beyond saying multiple options were worth consideration.

Biden and Warren currently lead the field with 29.4 percent and 23.4 percent of the vote, respectively, according to RealClearPolitics’ polling average. Socialist Sen. Bernie Sanders is next with 15.4 percent, and every other candidate falls below six percentage points.