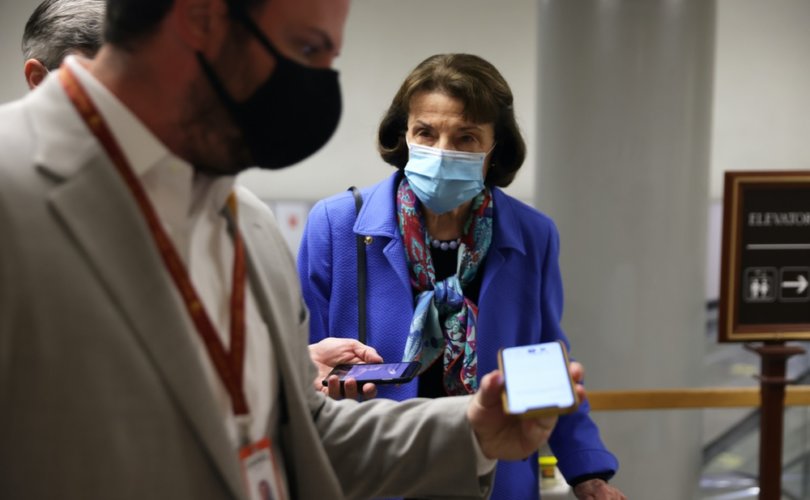 WASHINGTON, D.C., September 24, 2020 (LifeSiteNews) – With Judge Amy Comey Barrett widely assumed to be President Donald Trump’s choice to replace the late Justice Ruth Bader Ginsburg on the U.S. Supreme Court, Senate Democrats are currently weighing whether to pursue the same lines of attack they used against her when she was nominated to the Seventh Circuit Court of Appeals.

Barrett is a former University of Notre Dame law professor and Catholic mother of seven, whom Trump is said to have been holding in reserve to replace Ginsburg. Her record of past rulings, writings, and public statements indicates her to be a pro-life originalist.

Barrett’s confirmation hearings for her current position became a liability for Senate Democrats in 2017 when Sen. Dianne Feinstein (D-CA) interrogated her about her Catholic faith.

Feinstein was widely criticized for her comments, which have resurfaced in the wake of Ginsburg’s death and the prospect of a new Supreme Court battle.

“I'm not going to go there,” Feinstein told CNN when asked this week whether she would revive her 2017 objection. “Let's wait till she's nominated.”

One of the most radical Democrat senators, Mazie Hirono of Hawaii, has shown no such reluctance. “No,” she said when asked if Barrett’s faith should be off-limits. “Look, it wasn't her religious views — it's anybody's views that they bring to their decision making. So they keep telling us that none of the things they wrote or said yesterday should infringe on their decision, but how can we be assured that they can be objective? … Why should we say you get a lifetime appointment so that you can reflect your ideological agenda in your decision making?”

At least one Democrat, Sen. Joe Manchin of West Virginia, has warned his party not to go down that road again. “I'm Catholic, OK?” he told CNN. “Religion should not play a part … I don't know why that was ever brought up. And she's, she believes what she believes; I believe what I believe.” (At the same time, Manchin says he will vote against Barrett now; he voted for her in 2017.)

“If Amy Coney Barrett is indeed President Trump’s pick, the ugly proceedings she endured three years ago are not likely to be repeated” due to the “heavy price” Democrats paid for doing so in 2017, Catholic League president Bill Donohue predicts. “But we can never be complacent. We therefore request that everyone ask Senator Lindsey Graham, chairman of the Senate Judiciary Committee, to be on the alert for Catholic-baiting questions and remarks.”

Trump will formally announce his nominee on Saturday. Republicans are believed to have the votes to confirm him or her before the November election.