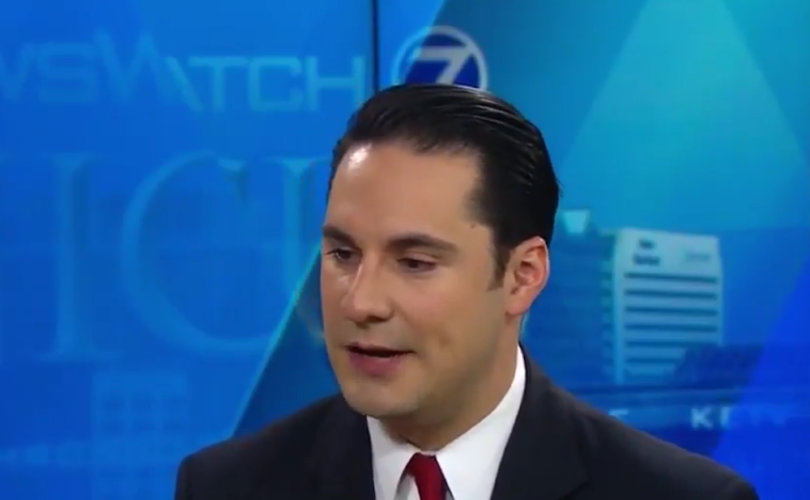 Heath Mello is a Democratic candidate for mayor in Omaha, Nebraska.

April 25, 2017 (LifeSiteNews) – An internal fight is occurring within the Democratic party after its new chair said it's “not negotiable” that its candidates must support abortion on demand.

The problem? As a Nebraska legislator in 2009, Mello was a co-sponsor of a bill to allow women the option of viewing an ultrasound before having an abortion.

There's actually not that much debate about abortion within the Democratic party, Sanders told CBS as he defended supporting Mello.

“I have a 100 percent lifetime pro-choice voting record” and most Democrats are pro-abortion, he said.

“If you have a rally in which you have the labor movement and environmentalists and Native Americans and the African-American community and the Latino community coming together saying, 'We want this guy to become our next mayor,' should I reject going there to Omaha?” Sanders asked. “I don't think so. It was a great rally, and I hope very much he wins.”

Mello's opponent “is also of course anti-choice and she is inviting Scott Walker, one of the most reactionary anti-choice governors” to “campaign for her,” Sanders complained.

Sanders said the “model of the Democrat party is failing.” He said it must become a “grassroots” party that makes decisions from the bottom up.

Mello says his Catholic faith “guides my personal views,” but he “would never do anything to restrict access to reproductive health care” as mayor.

The pro-abortion group NARAL slammed Sanders and the DNC for their “politically stupid” backing of Mello. NARAL President Ilyse Hogue told The New York Times that abortion supporters are Democrats' “most active political base” and supporting Mello sent the message that “we’re just negotiable political property.”

At first, new DNC chair Tom Perez defended the DNC's decision to back a candidate who's not completely pro-abortion on demand.

Then, Perez released a statement asserting, “Every Democrat, like every American, should support a woman’s right to make her own choices about her body and her health. That is not negotiable and should not change city by city or state by state.”

“I fundamentally disagree with Heath Mello’s personal beliefs about women’s reproductive health,” said Perez. “It is a promising step that Mello now shares the Democratic Party’s position on women’s fundamental rights. Every candidate who runs as a Democrat should do the same because every woman should be able to make her own health choices. Period.”

Sen. Dick Durbin, D-IL, said it's acceptable for Democrats to be personally against abortion as long as they don't actually act on that belief publicly.

“I am committed to women's rights under the law – reproductive rights, certainly,” Durbin said on CNN. “And our party is. We've made that part of our platform and position for a long, long time.

“I know within the ranks of the Democratic party there are those who see that differently on a personal basis. But when it comes to the policy position, I think we need to be clear and unequivocal. We need to be understanding of those who take a different position because of personal conscience, but as long as they are prepared to back the law, Roe v. Wade, prepared to back women's rights as we've defined them under the law, then I think they can be part of the party.”

“Of course,” said Pelosi. “I have served many years in Congress with members who have not shared my very positive, my family would say 'aggressive,' position on promoting a woman’s right to choose. But what you asked … was about what unifies Democrats. … Our values unify us. We are unified with our commitment to America’s working families about job creation, about budget policies that invest in the future, good-paying jobs. And that's what we'd like to see a debate on.”

This is a curious statement coming from Pelosi, who frequently trashes people opposed to abortion and says her pro-abortion views are acceptable for a Catholic to hold.

“There is an enormous disconnect between Democrat and Independent rank and file voters and national leaders like DNC Chairman Tom Perez and Senator Dick Durbin on the issue of abortion,” said Marjorie Dannenfelser, president of the Susan B. Anthony List. “As they push their party more and more to the extreme on abortion, the GOP benefits at the polls. Never has it been so clear: on abortion, there is no room for dissent or exceptions among Democrats, only support for the party’s radical platform which calls for abortion on demand up until the moment of birth, paid for by taxpayer dollars.”

“No wonder there are so few pro-life Democrats left advancing past the state legislature these days,” said Dannenfelser. “Perez and Durbin won’t even allow a mayoral candidate to be pro-life. It is no surprise Heath Mello of Omaha has already walked back his pro-life position. … NARAL Pro-Choice America, one of the left’s most extreme pro-abortion groups, called Bernie Sanders’ endorsement of Mello ‘politically stupid,’ yet last election revealed their own unbending agenda to be so.”

SBA List noted that in the 20 states that have passed a limit on abortion after five months, 277 Democratic legislators – 27 percent – have voted in support of the legislation.