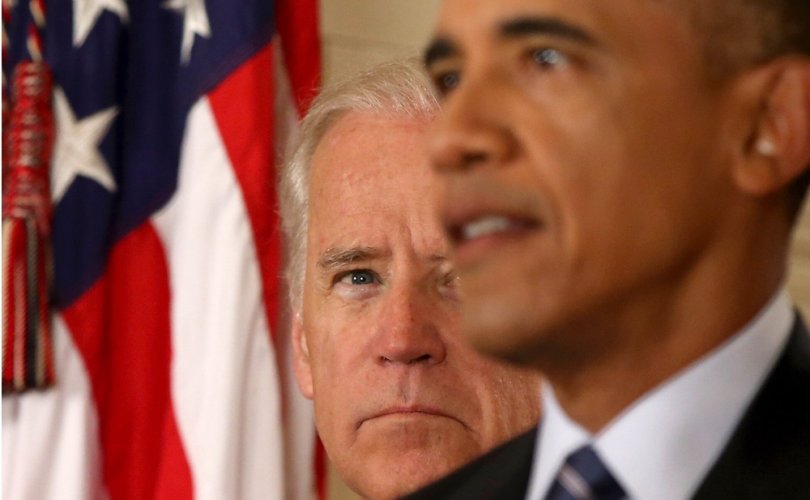 WASHINGTON, D.C. (LifeSiteNews) – An array of national Democrat leaders, including the current and previous Democrat Presidents of the United States, spoke out this weekend to lament the fact that Roe v. Wade did not last long enough to see what would have been its 50th anniversary.

“The Court got Roe right 50 years ago,” President Joe Biden said, calling it a “balanced decision with broad national consensus that the majority of Americans have continued to support for the last 50 years” (an assessment not shared by the late left-wing Justice Ruth Bader Ginsburg, who acknowledged in 1985 that Roe “appears to have provoked, not resolved, conflict”). But the Dobbs ruling, which in July overturned Roe, “put the health and lives of women across this Nation at risk.”

Biden, who claims to be Catholic, called on Congress to enshrine a “right” to abortion in federal law, pledged to “continue to use my Executive authority to protect women and families from harm in the wake of the Dobbs decision,” and “call[ed] upon Americans to honor generations of advocates who have fought for reproductive freedom, to recognize the countless women whose lives and futures have been saved and shaped by the Roe v. Wade decision, and to march forward with purpose as we work together to restore the right to choose.”

From the minute Roe was overturned last June, our Administration fought to protect access to abortion where we could – including taking executive action to safeguard access to medication abortion and travel to access reproductive health care services.

Let me be clear: a woman's right to choose is non-negotiable.

I haven't stopped fighting to protect women's reproductive rights – and I never will.

Now, it’s time for Congress to pass legislation codifying the protections of Roe.

Vice President Kamala Harris also spoke out, as previously reported by LifeSiteNews, during which she cited the Declaration of Independence’s language about “liberty and the pursuit of happiness” while neglecting the right to life immediately preceding them.

I hope you’ll join with the activists who’ve been sounding the alarm on this issue for years — and act. Stand with them at a local protest. Volunteer with them on a campaign. Donate to their causes. And vote in every election for candidates who will support reproductive rights.

Today should mark 50 years of Roe v. Wade as law of the land. Today, Americans in every corner of the country should still have reproductive freedom. But right-wing extremists ripped away this human right. I promise you this: I won’t stop fighting for the right to an abortion.

Today, we should be commemorating 50 years of Roe v. Wade. But the Republican-controlled Supreme Court tore up this landmark ruling last summer — jeopardizing the health, freedom and safety of women across the country.

We must keep fighting to enshrine Roe into law.

For MAGA Republicans—it's always been about banning abortion nationwide, punishing women & doctors for carrying them out, undermining women’s health@SenateDems are fighting for women and standing as a firewall against MAGA extremism

Despite being neglected by Democrats, long-settled biological criteria and mainstream medical textbooks recognize that a living human being, structurally and genetically distinct from his or her mother, is created upon fertilization and is present throughout the entirety of pregnancy. This is not in serious dispute; in 2019, University of Chicago Department of Comparative Human Development graduate Steve Jacobs found that 96% of more than 5,500 biologists he surveyed agreed, despite overwhelmingly identifying as “liberal,” “pro-choice,” and Democrats, and a majority identifying as “non-religious.”

Roe’s overturn sparked the activation of numerous state pro-life laws across the country, from pre-Roe bans that had been invalidated by the ruling to more contemporary bans and restrictions enacted in anticipation of a reversal — a trend that has saved thousands of lives.

Across the country, Planned Parenthood has suspended abortions and/or closed locations in reaction to Roe’s fall, and pro-life attorneys general have declared their intentions to enforce their states’ duly enacted abortion prohibitions.

But leftist prosecutors in various localities have vowed not to enforce pro-life laws, and pro-abortion activists have refocused efforts on interstate distribution of abortion pills, supporting interstate travel for abortion, codifying the tenets of Roe in federal law, and enshrining “rights” to abortion in state constitutions, ensuring that work and debate will continue over the prospect of banning abortion nationally.