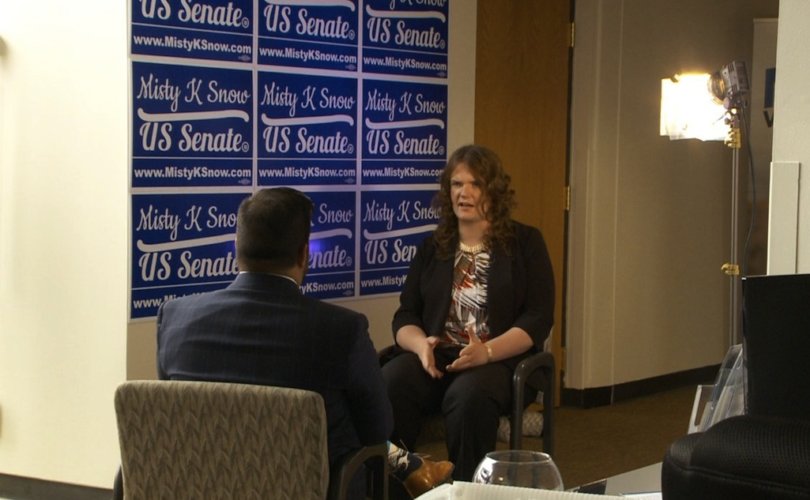 Misty Snow is running for a U.S. Senate seat as a transgender Democrat after winning the nomination in Utah.

June 30, 2016 (LifeSiteNews) – Democrats in Utah and Colorado nominated two transgender candidates this week, men depicting themselves as women, to represent their party in congressional races this fall.

Misty Snow received the nomination from the Democrats for one of Utah’s U.S. Senate seats on Tuesday, becoming the first transgender Senate candidate from a major party, the Miami Herald reports. Another Misty, Misty Plowright, won the Democratic primary for a House seat in Colorado.

Though Snow was the first to garner the Senate nomination while presenting himself as a woman, Plowright did not make transgender history with his House nomination because another candidate living openly as the opposite sex, Karen Kerin, won the Republican nomination for the House representing Vermont in 2000. Kerin, who passed away in 2014, lost that race overwhelmingly against then-Rep. Bernie Sanders, now a Vermont senator and Democrat presidential candidate.

Snow called his victory “a historic day for the LGBT community” in a statement, adding, “While I’m not running on the basis of being a trans woman, my experiences as a trans woman have given me the empathy to understand the struggles of groups that feel that the American Dream is out of reach. I’m running to give a voice to the voiceless.”

The 30-year-old grocery store cashier campaigned as a progressive, further to the left than primary opponent Jonathon Swinton, according to the Herald, and won by 19 points, despite Swinton receiving 55 percent of the delegate vote to Snow’s 45 percent at the Utah Democratic Convention in April.

Snow’s website claims conservatives have “been working to defund Planned Parenthood by using false evidence and highly edited videos to generate support for their cause,” and that “this is very troubling as Planned Parenthood provides many important health services to women, teens, and LGBT people.”

Plowright, 33, an Army veteran who has worked in the IT industry, got 13,000 votes in Colorado's 5th Congressional District primary while his opponent, Donald Martinez, won just over 9,600.

Plowright thanked voters in a statement, also telling them the next step in his campaign was marching in and having a booth at the Colorado Springs Pridefest.

According to Plowright’s website, “she has been has been in a committed, long-term relationship with her wife Lisa for nine years,” the two converting a domestic partnership into legal marriage in 2014 when the judiciary cleared the way for gay marriage in Colorado.

“They have both been in a loving, long-term, committed relationship with their mutual partner, Sebastian, for the last two years,” Plowright’s site states. “All three partners support each other emotionally, physically and financially.”

Both Democratic transgender candidates face challenging races in the fall against pro-life and pro-marriage Republican incumbents.

Plowright goes up against Rep. Doug Lamborn in what Politico terms Colorado’s most conservative congressional district, and Snow will run against Sen. Mike Lee, who won his Senate seat in 2010 with more than 60 percent of the vote.