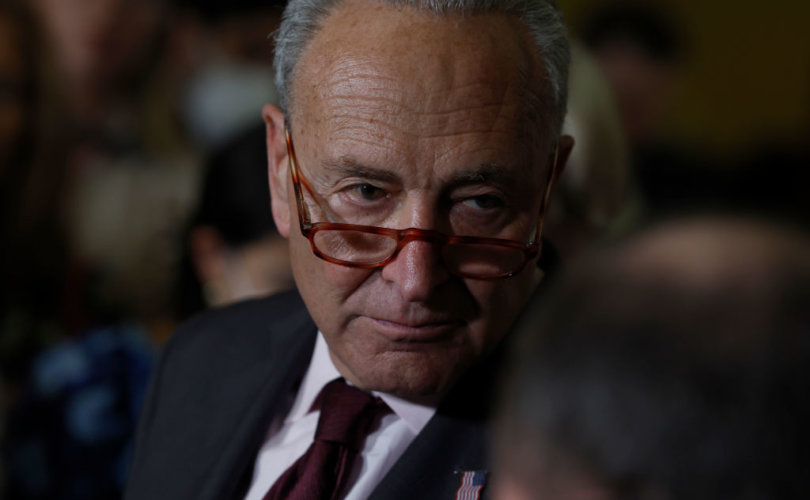 WASHINGTON, D.C. (LifeSiteNews) — The U.S. Senate will vote on a Democrat bill to codify forced recognition of same-sex “marriage” and open the door to federal recognition of polygamy “in coming weeks,” Democrat majority leader Chuck Schumer announced Wednesday, in what may be a sign that Democrats have found ten Republicans willing to defect.

In July, 47 House Republicans joined every House Democrat in voting to pass it, with the blessing of House Republican leaders Kevin McCarthy and Steve Scalise, and Senate Republican leader Mitch McConnell declined to stake out a public position on the legislation until Schumer announced a decision on bringing it to the floor of the evenly-divided Senate.

“We all want to pass this quickly,” Schumer said at a Wednesday press conference, the Associated Press reports. “I hope there will be 10 Republicans to support it.” The AP adds that the vote is expected by the end of September.

Politico adds that Democrats have also mulled attaching HR 8404 to a must-pass government funding bill, which would only need 51 votes. But Baldwin’s office says that “is not the Senator’s preferred path,” and Sen. John Cornyn (R-TX) says Republicans would object.

In any event, while Senate GOP leaders are neglecting to mobilize opposition to HR 8404, conservative groups such as Family Research Council, American Family Association, Concerned Women for America, and LifeSiteNews are picking up the slack. LifeSite is currently running a VoterVoice campaign to make Republican senators aware of grassroots opposition to HR 8404, and urging them to vote against it accordingly.