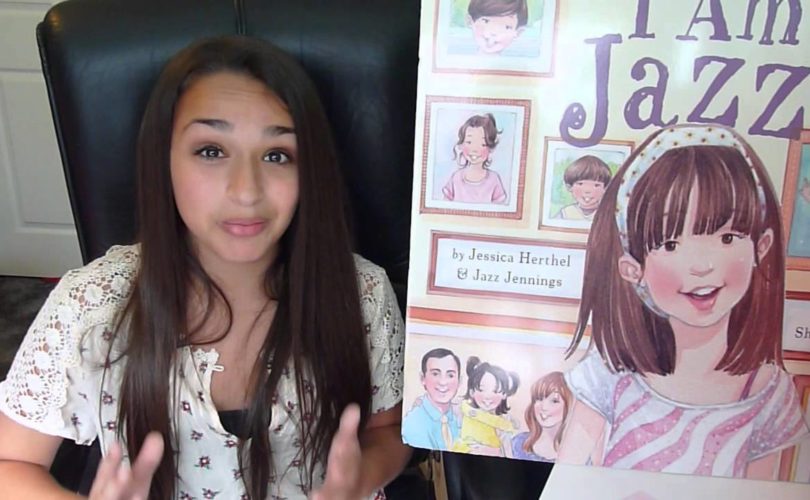 Jazz Jennings talks about his book 'I am Jazz'.

WASHINGTON, D.C., March 5, 2019 (LifeSiteNews) – To commemorate a day set aside by pro-LGBT lobbyists and the nation’s largest teacher union to promote gender fluidity, two Democrat congresswomen read the infamous “transgender” children’s book I Am Jazz on the floor of the U.S. House of Representatives last Thursday.

Sponsored by the Human Rights Campaign (HRC) Foundation and the National Education Association (NEA), the fourth annual “Jazz and Friends National Day of School and Community Readings” is supposedly meant to help “foster safe and welcoming schools and communities for young people who still rarely hear affirming stories of LGBTQ people,” according to HRC’s website.

HRC, a homosexual lobby group, claims the day saw more than 200 events spanning multiple countries, states, schools, and community gatherings, but perhaps the most notable came in the Democrat-controlled house, where Democrat Reps. Jackie Speier of California and Angie Craig of Minnesota read I Am Jazz during a legislative session.

Co-written by Jazz Jennings, a male media personality and transgender activist who “identifies” as female, the book is told from the perspective of a child Jazz who likes pink, dancing, princess gowns, high heels, and mermaids.

“I have a girl brain but a boy body,” Jazz says in a passage recited by Speier. “This is called transgender. I was born this way!”

The book touches on several standard transgender grievances, including being limited to the restrooms and sports teams of one’s actual sex rather than “identity,” and confusion from teachers and intolerance from peers.

“Then, I remember that the kids who get to know me usually want to be my friend,” Craig read. “They say I am one of the nicest girls in school. I don’t mind being different, different is special. I think what matters most is what a person is like on the inside. And inside, I am happy, I am having fun, I am proud, I am Jazz.”

Speier also hosted a private reading of the book with “transgender” service members who oppose the Trump administration’s ban on individuals with a history or diagnosis of gender confusion from the armed forces.

Proud to deliver two very special readings of I Am Jazz for #JazzAndFriends – with transgender servicemembers before my hearing yesterday in MILPERS & on the House floor this morning. To all transgender & non-binary youth, please know @HouseDemocrats see, support, & honor you. pic.twitter.com/ia32Nn9YfQ

Critics argue that by promoting gender fluidity and confusion to children, works such as I Am Jazz only set them up for mental and emotional problems later on.

According to human biology, sex is not a matter of subjective perception but rooted in an individual’s chromosomes and reflected by hundreds of genetic characteristics. Studies indicate that between 80-90 percent of children experiencing gender confusion outgrow it on their own by late adolescence, and that even full gender “reassignment” surgery often fails to resolve gender-confused individuals’ heightened tendency to engage in self-harm and suicide.

Last fall, Brown University behavioral scientist Lisa Littman published a study finding that 87 percent of the teens reviewed (via questionnaires to 256 parents) belonged to a friend group characterized by some degree of “social influence” on gender, such as other gender-confused teens; and that 63 percent of the teens had been diagnosed with at least one mental health disorder or neurodevelopmental disability before deciding they were a different gender.

According to board-certified endocrinologist Dr. Michael Laidlaw, the book’s claims that transgender children such as Jennings are “born this way” and have “girl brains” are contradicted by established research and medical knowledge, and it omits key details that would complicate the narrative, such as Jennings suffering from depression and taking hormone blockers, and is likely to be permanently infertile and incapable of any sexual sensation due to his “treatment.”