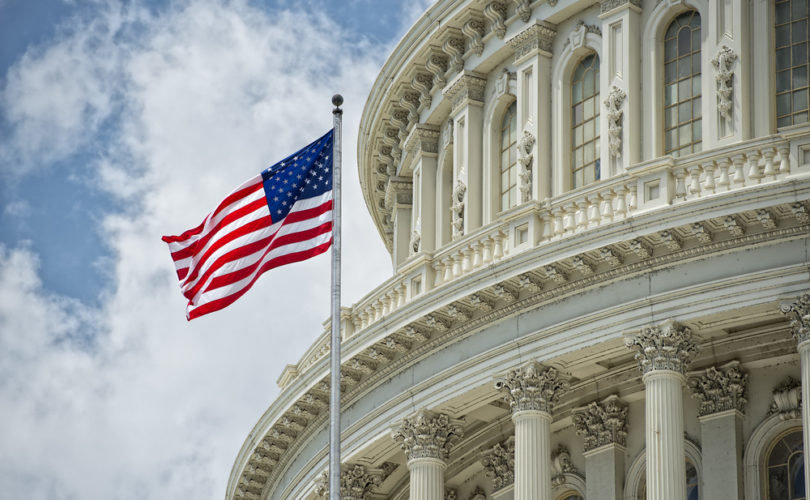 WASHINGTON, D.C., January 3, 2019 (LifeSiteNews) – Democrats wasted no time asserting their priorities upon taking over the U.S. House of Representatives this week, proposing legislation to fund the federal government which would at the same time reverse one of President Donald Trump’s earliest pro-life accomplishments.

The federal government has been partially shut down since Trump, facing pressure from conservatives, decided at the last minute in December to reject a government funding bill that didn’t include $5 billion to begin constructing the southern border wall he campaigned on. While the media is filled with distress over the shutdown and uncertainty over whether Democrats or Republicans will blink first, most of the government was already funded and remains in operation.

Following her return to the office of House Speaker Thursday, Democrat leader Nancy Pelosi announced that her party would be “offering the Senate Republican Appropriations [Committee] legislation to reopen the government later today,” Fox News reports. The proposal would fund the Department of Homeland Security until February 8 and other federal departments until the end of September.

The bill has been a political non-starter because it lacks wall funding, however, and pro-lifers are warning that it would also repeal the Mexico City Policy (now called Protecting Life in Global Health Assistance) that Trump reinstated shortly after taking office and later expanded. That would make foreign entities that commit or promote abortions once again eligible for foreign aid.

The plan would also give $37.5 million to the United Nations Population Fund, from which Trump withdrew in 2017 over its participation in China’s forced abortion regime.

“This move shows the House Democrats are so radically pro-abortion that they are more concerned with pushing their abortion agenda on the American people than finding common ground to end the government shutdown,” Live Action president Lila Rose responded. While Trump and Senate Republicans “failed last session to pass a law preventing the American taxpayer from funding Planned Parenthood,” they “now have a duty to stand firm and block such outrageous attempts to have the American taxpayer fund and promote abortion programs across the globe.”

“News that abortion is the leading cause of death worldwide is a tragedy of international proportions, but asking U.S. taxpayers to pay for it is an offensive misuse of scarce resources,” Students for Life of America president Kristan Hawkins said. “Taxpayers have had enough of the abortion industry’s vision of abortion as the United States’ number one export. As a bipartisan matter, we should help women and children at home and abroad, without making ending life the goal of U.S. policy.”

Senate Majority Leader Mitch McConnell has already rejected the proposal as a “political sideshow,” declaring that the Senate “will not waste its time considering a Democratic bill which cannot pass this chamber and which the president will not sign.”

How the shutdown standoff will end remains unclear. Conservative pundit Ann Coulter, who was one of Trump’s earliest and most passionate supporters, predicted this week the president “will fold in the end,” though others argue he can satisfy supporters by funding the wall through other revenue sources not reliant on Congress.

In July 2017, Rep. Steve King (R-IA) suggested the federal funding that goes to Planned Parenthood be directed to the border wall instead.

As for abortion policy under the new Congress, pro-lifers are largely resigned to two more years without direct legislation to defund Planned Parenthood or otherwise restrict abortion, though they remain optimistic that Trump will continue to find incremental steps for life via executive action, and hope Republicans’ expanded Senate majority will enable the confirmation of judges with clear pro-life credentials.

Pelosi is a self-declared “Catholic” with a 100 percent pro-abortion voting record, who has said that promoting “diversity” among Capitol Hill staff will be one of her priorities in the new Congress. On multiple occasions, however, she has also displayed the political acumen to deemphasize left-wing causes like abortion for the sake of winning over Americans on economic or healthcare grounds.

After the November midterms, the New York Times revealed that Pelosi helped Democrats return to power in part by counseling “restraint” against fighting over things like Planned Parenthood in favor of a focused message on more mainstream concerns. “Those things are in our DNA, but they are not in our talking points,” she reportedly said on multiple occasions.

In April, she defended her support of “pro-life” Democrats like Illinois Rep. Dan Lipinski on the grounds that his election would count toward a “pro-choice gavel when we win the Congress,” and during the campaign downplayed Democrat calls to impeach President Donald Trump. Conservatives suspect such assurances were merely meant to hide Democrats’ true intentions so as not to provoke GOP voter turnout.

The Hill reports that 15 House Democrats, most of whom were just elected, opposed Pelosi’s re-election as speaker, though they didn’t agree on a single alternative and their ranks were far short of the “dozens” who had previously distanced themselves from her.

“On day one of the new Congress, Nancy Pelosi and House Democrats are already trying to foist a radical pro-abortion agenda on the nation,” Susan B. Anthony List President Marjorie Dannenfelser said. “The House’s spending bill would…[make] taxpayers complicit in the exportation of abortion and destruction of countless unborn children around the world. This is unconscionable and we oppose the bill in the strongest terms.”