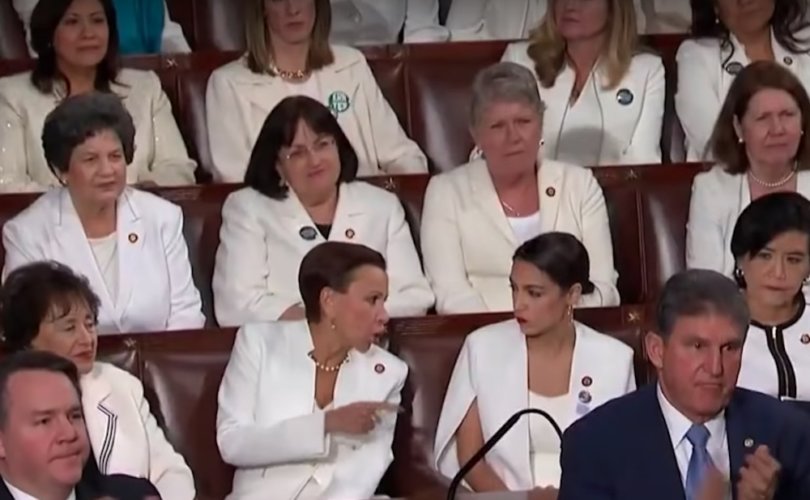 WASHINGTON, D.C., February 6, 2019 (LifeSiteNews) – Congressional Democrats gave President Donald Trump a cold shoulder during much of his State of the Union address Tuesday evening, including during his call for Congress to pass a ban on late-term abortions.

“To defend the dignity of every person, I am asking Congress to pass legislation to prohibit the late-term abortion of children who can feel pain in the mother’s womb,” Trump said after referencing New York’s new law allowing abortion effectively until birth and Virginia Gov. Ralph Northam’s comments endorsing infanticide. “Let us work together to build a culture that cherishes innocent life. And let us reaffirm a fundamental truth — all children — born and unborn— are made in the holy image of God.”

The passage was met with ringing applause from Republicans in attendance, but Democrats remained seated and silent, with the applauding Sen. Joe Manchin of West Virginia a rare exception. Senate Minority Leader Chuck Schumer could be seen smirking during that time, as well.

I guess only certain #Smirks are acceptable.�� @SenSchumer is an evil #obstructionist high on power, sold his soul, smirk over late-term abortion, #crimes against humanity. #CovingtonCatholic#StandYourGround pic.twitter.com/mDbDdLFPGP

Numerous Democrat women wore white to the address, as well, which Fortune reported was meant to highlight the number of women in elected office.

“It is repulsive where the Democrats have gone. Northam was talking not even about late-term abortion; he was talking about aborting an infant after it's born,” Sen. Tex Cruz of Texas said of Democrats’ reaction on Sean Hannity’s Fox News show Tuesday evening. “That is staggering. You know it was sad when the president talked about about ending late-term abortions, it wasn't that long ago Bill Clinton stood up and said abortion should be safe, legal and rare. Now he didn't mean it, but that's what he said.

“Tonight virtually every Democrat in the chamber stood stone-faced in support of late term abortion,” Cruz continued, lamenting there were only “one or two Democrats in the entire Congress who decided late-term abortion was too much for them.”

“If we're having that conversation today, and we're not just outright saying, 'This is ridiculous,' there's truly something wrong with our moral compass,” the president’s son, Donald Trump Jr., agreed on Fox & Friends Wednesday morning. “And when I watch those Democrats standing there saying that, 'Oh, it's terrible that you can't let someone kill a baby that is in the process of being born, in labor or shortly thereafter, something's very wrong.”

With Democrats controlling the House of Representatives, few if any expect a ban on late-term abortions, or any other pro-life legislation, to reach Trump’s desk in the next two years. On Monday, Democrat Sen. Patty Murray blocked unanimous consent on a bill that would mandate medical care for babies born alive after failed abortions, arguing infanticide was already illegal and vaguely claiming its true purpose was somehow different than advertised.