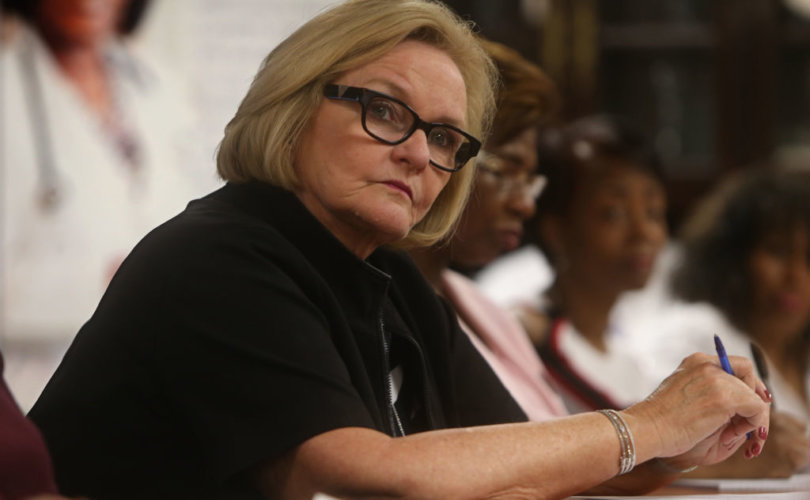 ST. LOUIS, Missouri, October 19, 2018 (LifeSiteNews) – James O’Keefe’s Project Veritas Action (PVA) is back with another bombshell undercover investigation, this time filming staffers for Sen. Claire McCaskill, D-MO, detailing multiple ways in which the senator and her allies at Planned Parenthood mislead voters on the full extent of her pro-abortion stance.

PVA released the report Tuesday, in which an undercover journalist speaks to several members of the Missouri Democrat’s staff about her positions, how she presents them to her constituents, and her campaign’s relationship with the nation’s largest abortion chain.

“You were saying that you think [McCaskill is] more progressive than she lets on?” the reporter asks at one point. Staffers Carson Pope and Melissa Balke agree, but explain that she “can’t be open about that” because “this is a 19-point Trump state” and “she would completely isolate the moderate Republicans.”

Of particular concern is McCaskill’s “100 percent” support for abortion. She holds 100% pro-abortion scores with Planned Parenthood and NARAL. Her “Women’s Health & Well-Being” issue page avoids any direct mention of abortion, bases her support for Planned Parenthood on “breast and cervical cancer screenings,” and invokes contraception to “prevent unintended pregnancies.”

To further downplay any association with abortion, the staffers explained that Planned Parenthood doesn’t directly donate to McCaskill’s campaign because of the optics, but financially supports her through other means.

However, Staros explained that the abortion giant goes “through other means to get us that money,” such as EMILY’s List – a connection people wouldn’t see “unless they go like deep, deep, deep down into a campaign, like finance.”

“It’s f***ing beautiful” that Planned Parenthood can effectively donate to McCaskill’s campaign without disclosing their name, Staros boasted. “It’s great when it works for us and not against us.”

McCaskill responded to the report by calling on GOP challenger Josh Hawley, who is currently the state’s attorney general, to recuse himself and appoint a special prosecutor to investigate Project Veritas.

“Hawley has been embracing, celebrating and promoting this clear case of fraudulent activity designed to hurt his political opponent,” she complained. “It should not be lost on any Missourian that Hawley will stoop to anything – and stop at nothing – to climb the ladder to higher office.”

“Senator, accusing people of crimes is a serious thing,” he said. “If you have evidence of a crime, please come forward with it immediately. Otherwise, please stop politicizing the legal process for your re-election.”

As for the video’s revelations, McCaskill claimed simply that she’s been “very upfront about all my positions” and that she rejected the interviewer’s attempts to get her “to say something different than what my positions are.”

As for the staffers in the video, campaign manager David Kirby said he was “not going to comment on what a 25-year-old kid says behind closed doors when they're not authorized to talk for the campaign.”

RealClearPolitics currently rates the Missouri Senate race as a toss-up, with Hawley holding an advantage of just 0.5% according to their polling average. Republicans hope unseating McCaskill will help preserve and/or expand their current 51-49 majority.

1
New York mask mandate back in effect one day after judge strikes it down
2
Dr. Robert Malone warns parents about COVID vaccines for children at ‘Defeat the Mandates’ rally in DC
3
Humble truck drivers could be the ones who finally liberate Canada from Trudeau’s COVID tyranny
4
Time-lapse video shows huge crowds at 2022 March for Life
5
GoFundMe freezes more than 4 million dollars raised for Canadian truckers protesting vax mandates
Subscribe to Daily Headlines »