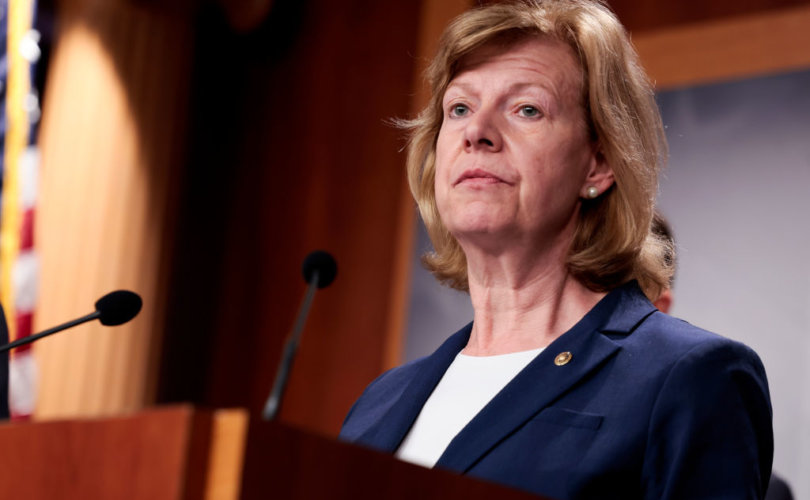 WASHINGTON, DC - MAY 05: Sen. Tammy Baldwin (D-WI) speaks at a press conference on the Senate’s upcoming procedural vote to codify Roe v. Wade at the U.S. Capitol Building on May 05, 2022 in Washington, DC. Anna Moneymaker/Getty Images

WASHINGTON, D.C. (LifeSiteNews) – Senate Democrats announced Thursday that they will postpone a vote on a bill to codify same-sex “marriage” until after the November midterm elections, as the bill’s backers struggle to find enough Republican votes to get it passed.

The bill, the “Respect for Marriage Act” (RFMA), would enshrine same-sex “marriage” into federal law and force the federal government to recognize polygamous unions. Catholic leaders, including San Francisco Archbishop Salvatore Cordileone, and dozens of top conservative groups have also warned that it would pose serious threats to religious freedom.

After the RFMA passed the House in July with the unexpected support of 47 Republicans and the blessing of GOP House leaders, Democrats pledged to bring it up for a vote in the Senate. Wisconsin Democratic Sen. Tammy Baldwin, the bill’s lead Senate sponsor and an open lesbian, said she expected a vote as early as next week.

But Baldwin backtracked on Thursday, telling reporters that “we will be taking the bill up later, after the election.”

“I’m still very confident that the bill will pass,” she added.

The Associated Press reported that the move to delay the vote came after a meeting between a group of Republican and Democratic senators championing the bill and Democratic Senate Majority Leader Chuck Schumer, who had vowed last week to hold a vote on the bill by the end of September.

“We’ve asked Leader Schumer for additional time and we appreciate he has agreed. We are confident that when our legislation comes to the Senate floor for a vote, we will have the bipartisan support to pass the bill,” read a statement released by the group, which includes Baldwin and Arizona Democratic Sen. Kyrsten Sinema, a bisexual, as well as Republican Sens. Susan Collins of Maine; Rob Portman of Ohio, whose son is a homosexual; and Thom Tillis of North Carolina.

The statement noted that the five senators have crafted an amendment to the Respect for Marriage Act that they said “respects religious liberty” in an effort to make the bill more palatable to undecided Republicans, though the proposal has already faced pushback from conservatives.

“The American people should not be fooled,” Heritage Foundation vice president for domestic policy Roger Severino said on Thursday in response to the amendment. He added that the RFMA “can be used as a weapon by government agencies, such as the IRS, to deny traditional religious institutions tax-exempt status, licenses to assist in adoptions, and government funding and contracts.”

The Washington Post reported that the bipartisan group of senators “disseminated the new text Thursday afternoon to the GOP lawmakers considering voting for the legislation. But ultimately, the group decided that there wasn’t enough time in the waning days of the legislative session ahead of the midterms to push a vote.”

Republicans acknowledged that the bill does not yet have the 10 GOP votes necessary to clear the 60-vote Senate filibuster, Politico noted.

“Leader Schumer is extremely disappointed that there aren’t 10 Republicans in the Senate willing to vote yes on marriage equality legislation at this time,” a Thursday statement from a spokesman of Sen. Schumer read, stressing that the Democratic leader “is 100 percent committed to holding a vote on the legislation this year.”

Polling shows that the Respect for Marriage Act is broadly unpopular with Republican voters: A new Politico/Morning Consult poll found that at least 50 percent oppose it, including nearly 40 percent who strongly oppose it. Just 38 percent of Republican voters support the measure, and only half of them do so strongly.

But voting on the bill later this year, during what’s known as the lame duck session, could result in more support from Republican senators who wouldn’t have to worry about immediately facing conservative voters, Sen. Portman suggested. “It takes a lot of the political sting out of it,” he said, according to the Post.

Despite mounting opposition to the Respect for Marriage Act from the GOP base, the moderate and liberal Republicans pushing the bill in the Senate said they remain committed to making it law and are confident that it will pass.

“I think we’re in very good shape and this bill is going to pass,” Sen. Collins told reporters.

Sen. Tillis agreed. “I’m convinced that this is going to pass,” he said. “The people who have been negotiating it want an outcome. I reject the idea that the timing decision was political. But quite honestly, it even takes that off the table.”

“We have listened to our colleagues and we have made certain changes on the religious liberty front, which have, I think have been very positive in terms of getting them on board,” Sen. Portman told Fox News. “But colleagues need a little more time to digest it, which is understandable, and some of the language was still being worked on as of this morning.”

“The possibility of a stronger bipartisan vote after the election seems to me to be likely,” he continued.

Along with Collins, Portman, and Tillis, Republican Sen. Lisa Murkowski of Alaska, who faces a tough re-election bid against conservative challenger Kelly Tshibaka, has indicated that she would likely vote for it. Wisconsin Republican Sen. Ron Johnson initially said he saw “no reason to oppose” the bill but has since backpedaled on his apparent endorsement amid grassroots backlash.