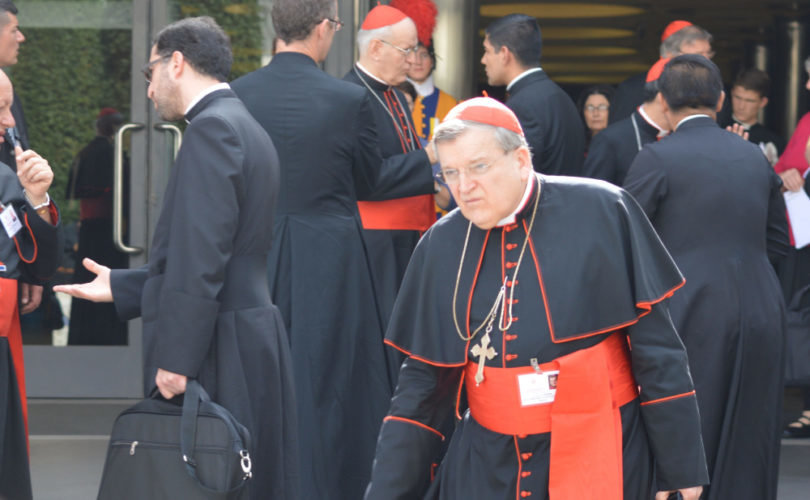 Cardinal Raymond Burke, prefect of the Vatican's Apostolic Signatura, leaves the Synod hall at lunch time on October 13, 2014 after the controversial mid-term report from the Synod was read.Patrick Craine / LifeSiteNews

The transfer of Cardinal Raymond Burke from his Vatican post to a more ceremonial role won’t stop him from speaking out in defence of Catholic orthodoxy, including on the controversial life and family issues, and may even increase his effectiveness, his friends and allies in America and abroad told LifeSiteNews this week.

On Saturday, the Vatican officially announced that Pope Francis had removed Burke from his post as prefect of the Church’s highest court, the Apostolic Signatura, and named him patron of the Order of the Knights of Malta.

While the move is almost universally being interpreted as a demotion for the cardinal, pro-life and pro-family leaders expressed hope that it could have the side effect of freeing him up to speak even more openly about the critical issues of the  day.

“I believe [leaving the Curia] will embolden him like never before,” said Judie Brown, president of American Life League, who calls Cardinal Burke “my dear friend and a loyal son of the Church.”

“He will no longer be constrained by the politics of the Curia,” she said. “He will be even more outspoken and even more articulate in defence of doctrine. There are very few in the leadership of the Church with the kind of clarity and courage of Cardinal Burke and I don’t expect him to be quiet now at all when it comes to what is and what is not Catholic teaching.”

Brown said she believes Burke has been forced out of the Vatican by “the people who have made it their business to surround and advise the pope, who do not exactly appreciate [Burke’s] orthodox positions. But he is such a holy, humble servant of the Church that he sees this as where God wants him. That’s what he said and that’s what he means.”

Speculating on the reasons for the cardinal’s removal, he observed that “as Prefect, Cardinal Burke was the head authority over all tribunals, including annulments, and it is well known that one of the prime agendas of certain prelates at the recent Synod is to streamline annulments, making them easier to obtain.  Cardinal Burke made clear his objections to streamlining an already too-easy process.”

Hichborn said he believes the cardinal “epitomizes everything Our Blessed Lord intended His shepherds to be. He is humble, polite, and truly meek in his speech and manners, and a veritable fortress in defense of the Truth.”

William Donohue, president of the Catholic League for Religious and Civil Rights, told LifeSiteNews that Cardinal Burke’s transfer was “regrettable, but we all knew it was coming.” However, added Donohue, “I don’t see him paring back. He’s not being put out to pasture. I expect him to continue to be the man of the hour.”

Donahue called Burke “the voice of moral courage. And I emphasize ‘courage’.”

Also hoping that Cardinal Burke’s removal from the corridors of power will actually make him a more powerful voice of faith and reason was John Smeaton, chief executive of Great Britain’s Society for the Protection of Unborn Children and a co-founder of Voice of the Family.

“We are praying that in his new role he will have even greater scope to continue his bold prophetic role at a time of unprecedented confusion in the Church,” said Smeaton. “Cardinal Burke has been a giant during his time in the Curia, and a stirring example in his teaching and preaching.”

Thomas McKenna, president of Catholic Action for Faith and Family, said he hated to use the term “demotion” to describe what had happened to Cardinal Burke, but said he believes that those who are spinning it as “normal after five years in a senior Vatican post” were wrong.

Typically, he said, if a member of the curia does well, their assignments are extended. “Cardinal Burke has carried out his duties throughout his career in an outstanding fashion,” added McKenna, with his Vatican posting being no exception.

It was because of his moral authority that “people around the world looked to him during the Extraordinary Synod for guidance,” he added.

As of this writing, over 23,000 people have signed a petition thanking Cardinal Burke, and pledging to pray for him and to follow his example. You can find it here.

‘We have to judge acts’: Vatican’s Cardinal Burke dismantles ‘Who am I to judge?’