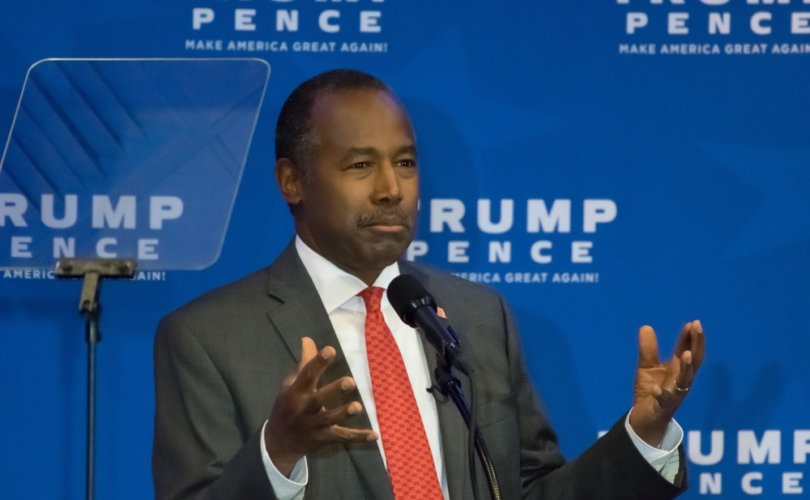 WASHINGTON, D.C., October 7, 2019 (LifeSiteNews) — A pair of Democrats in the U.S. House of Representatives has introduced a resolution condemning what they say is the “transphobic history” of Secretary of Housing and Urban Development (HUD) Dr. Ben Carson.

Reps. Mike Quigley of Illinois and Katie Hill of California, the only self-declared “bisexual” in the U.S. House, acted in response to comments that Dr. Carson made to HUD employees in San Francisco expressing concern about “big, hairy men” pretending to be female in order to infiltrate women’s homeless shelters.

The HUD Secretary also reportedly said that society could no longer differentiate between men and women.

“I made reference to the fact that I had heard from many women’s groups about the difficulty they were having with women’s shelters because sometimes men would claim to be women, and that HUD’s policy required the shelter to accept — without question — the word of whoever came in,” Carson wrote in response to criticism of his comments.

“This made many of the women feel unsafe, and one of the groups described a situation to me in which ‘big hairy men’ would come in and have to be accepted into the women’s shelter even though it made the women in the facility very uncomfortable,” continued Dr. Carson.

“At a minimum, he owes an apology to the staff he subjected to his bigoted remarks, to trans individuals around the country, and to the entire LGBT community,” Rep. Quigley told NBC News. “It is clearer than ever that Secretary Carson’s bigoted views make him unfit to lead HUD and the record must reflect that this Congress does not condone such intolerance.”

“Secretary Carson’s comments were hurtful, bigoted, and do not represent the feelings of this Congress, which has a historically large and diverse LGBT Equality Caucus, or the American people,” said Rep. Hill.

The backlash against Dr. Carson’s comments suggesting that men do not belong in women’s shelters – where they often seek refuge from abusive men – has been brutal among Democrats, hoping to make political hay by appealing to LGBT groups which often align with progressivism’s furthest ideological fringes.

When 10 of the 22 contenders for the Democrat presidential nomination participated in an LGBT Presidential Forum two weeks ago, most went out of their way to condemn Dr. Carson for his comments and promised that one of their first actions after taking over the Oval Office would be to fire him.

In their resolution, Reps. Quigley and Hill claim that Dr. Carson’s “statements are incredibly disrespectful and reflect bigoted, outdated thinking that is both offensive” and  that he has “created a divisive and demoralizing atmosphere which does not best serve the American people.”

The resolution also condemns statements made by Dr. Carson in recent years with which many – if not most – Americans might agree:

In an interview with Fox News’ Tucker Carlson shortly after the controversy over his comments in San Francisco erupted, Dr. Carson explained, “I simply pointed out the fact that, you know, we have to have policies that take into consideration everybody’s rights. I say everybody has equal rights; nobody gets extra rights.”

“I talked about some of the women’s groups who have come to me, and I’ve had many in my office, and they say they are uncomfortable with the policy in existence, which says you must accept a person's designation of their gender regardless of their physical characteristics,” he continued. “What we've decided to do, first of all we’ve upheld the 2012 equal access law; we have no intention of changing that, but in terms of that broad definition of gender being whatever you say it is, we said we're going to leave that to the local jurisdictions.”

“If you have a women's shelter and you’ve been operating well, you get to decide how you're going to run it, the federal government doesn't need to be telling people who is a man and who is a woman,” he declared. “That's a decision they can make by themselves.”

“And I quoted a group that came to me, and they were very upset, and they said, you know, ‘a big hairy man came in here and he says he’s a woman, and that upsets us because many of us are trying to escape that,’” Carson said. “But the political correctness says you have to say what we want you to say, and that will destroy freedom of speech.”

“And I’ve offered transgender groups the opportunity to let me know what their solution would be so that everybody’s rights are observed,” he added. “I haven’t heard one peep.”