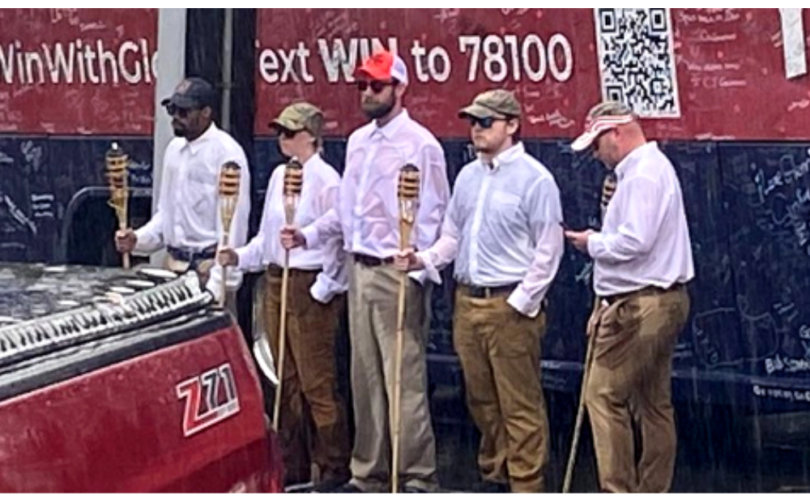 (WND News Center) – The Republicans who formed the Lincoln Project based on their virulent opposition to Donald Trump, repeated on Friday the false “very fine” people claim against the former president, when the group took responsibility for a bizarre racial stunt at a campaign stop in Charlottesville, Virginia, by Republican gubernatorial candidate Glenn Youngkin.

After suspicion was raised that the campaign of Democratic opponent Terry McAuliffe was behind it, the Lincoln Project took credit for sending five people in white shirts to stand in front of Youngkin’s campaign bus holding tiki torches in the style of the 2017 protest in Charlottesville.

In a statement, the Lincoln Project said the demonstration “was our way of reminding Virginians what happened in Charlottesville four years ago, the Republican Party’s embrace of those values, and Glenn Youngkin’s failure to condemn it.”

The Lincoln Project pressed Youngkin to denounce Trump for a statement that he did not make.

“We will continue to hold Glenn Youngkin accountable. If he will denounce Trump’s assertion that the Charlottesville rioters possessed ‘very fine’ qualities, we’ll withdraw the tiki torches,” the group said. “Until then, we’ll be back.”

In fact, during his remarks on Charlottesville four years ago, Trump immediately made it clear he was not referring to “the neo-Nazis and white nationalists” as “fine” people, explicitly declaring “they should be condemned totally.”

His reference – as a CNN contributor pointed out in a rebuke to his network colleagues – was to the people on both sides of the issue of whether or not to maintain statues of Robert E. Lee and other Confederate figures.

Biden, in one of many occasions in which he repeated the lie, said during his acceptance speech at the Democratic National Convention that Trump’s words in 2017 were “a wake-up call for us as a country” and, for him, “a call to action.”

When Kamala Harris repeated the lie during the vice-presidential debate in October, then-Vice President Mike Pence rebutted her and delivered a word to media who have peddled it.

“You know, I think this is one of the things that makes people dislike the media so much in this country. That you selectively edit, just like Sen. Harris did, comments that President Trump and I and others on our side of the aisle make,” Pence said. “Sen. Harris conveniently omitted after the president made comments about people on either side of the debate over monuments, he condemned the KKK, neo-Nazis, and white supremacists, and has done so repeatedly.”

Biden, for his part, weighed in on the controversial Confederate flag issue in a 1993 Senate session, declaring that “many fine people” display it.

‘We’re all in for Glenn’

While the McAuliffe campaign has denied it had anything to do with the stunt, it tried to capitalize on it. Communications staffers Jen Goodman and Christina Freundlich on Twitter portrayed the white-shirted five as genuine Youngkin supporters.

Their tweets were deleted after the Lincoln Project issued its statement.

Elizabeth Holmes, a reporter for local WVIR-TV, was on the scene with the first report. She apparently did not suspect that the five might be perpetrating a hoax, tweeting that the group said, “We’re all in for Glenn.”

According to state campaign records, Terry McAuliffe’s campaign has received $264,000 in campaign assistance from the Lincoln Project, which coordinated with the state Democrat party and McAuliffe’s campaign to perpetrate a race hoax in Virginia today. https://t.co/P0keoibsBk pic.twitter.com/CR8eyFfo2a

We’re teaching the Dems how to play hardball

Noting the Lincoln Project was “getting crushed by people on the right” accusing them of “a dirty tactic,” CNN’s Chris Cuomo asked Lincoln Project co-founder Stuart Stevens if he stood by the group’s stunt.

Cuomo tagged on the end of his question the idea that the group was “being what you say you oppose.”

“Listen,” replied Stevens. “Every day I hear people pleading with the Lincoln Project to help show Democrats how to win, how to play hardball. You know, this is an example.”

— Article continues below Petition —
PETITION: Urge "Catholic" Terry McAuliffe to renounce his promotion of abortion
Show Petition Text
1713 have signed the petition.
Let's get to 2500!
Thank you for signing this petition!
Add your signature:
Show Petition Text

Stevens said the “question here is not about some guys who showed up at a rally.”

“It’s why hasn’t Glenn Youngkin denounced Donald Trump for saying that there are good people on both sides? I mean, that is absolutely outrageous. And it’s because Glenn Youngkin wants it both ways. And I think that’s the message that needs to be driven here.”

“It was to illustrate a point that Youngkin has not denounced Trump saying there were ‘fine people on both sides’ in Charlottesville.” — Democratic Strategist @JamesCarville pic.twitter.com/tVRTjkNJIU

Last fall, another Lincoln Project co-founder, longtime Republican strategist John Weaver, resigned amid accusations he sent unsolicited and sexually provocative messages online to young men. A New York Times report in January cited interviews with 21 men who received the messages, including one in which he asked a 14-year-old boy about his body. Weaver was accused of offering personal and professional favors in exchange for sex to at least 10 of the men.

He issued a statement apologizing to “the men I made uncomfortable through my messages that I viewed as consensual mutual conversations at the time.”

“The truth is that I’m gay,” Weaver added. “And that I have a wife and two kids who I love. My inability to reconcile those two truths has led to this agonizing place.”

Critics blasted the Lincoln Project’s investigation of the matter, conducted by a law firm, which insisted it found no evidence that the super PAC’s leaders knew of the claims prior to the news reports. A memo to Lincoln Project supporters said the firm found “no communications nor conduct reported to The Lincoln Project or its leadership involving Mr. Weaver and any employee, contractor, or volunteer that would rise to the level of actionable sexual harassment.”

But Times reporter Ryan Girusky, who broke the story, argued the firm’s report did not state whether or not the leadership was aware of any allegations. “Multiple reporters from many outlets concluded they did” know, Girusky wrote on Twitter.

On Friday, Virginia Democratic Party Executive Director Andrew Whitley said in a statement that his party and its partners had nothing to do with the campaign stunt.

“What happened in Charlottesville four years ago was a tragedy and one of the darkest moments in our state’s recent memories and is an event not to be taken lightly. For anyone to accuse our staff to have a role in this event is shameful and wrong.”