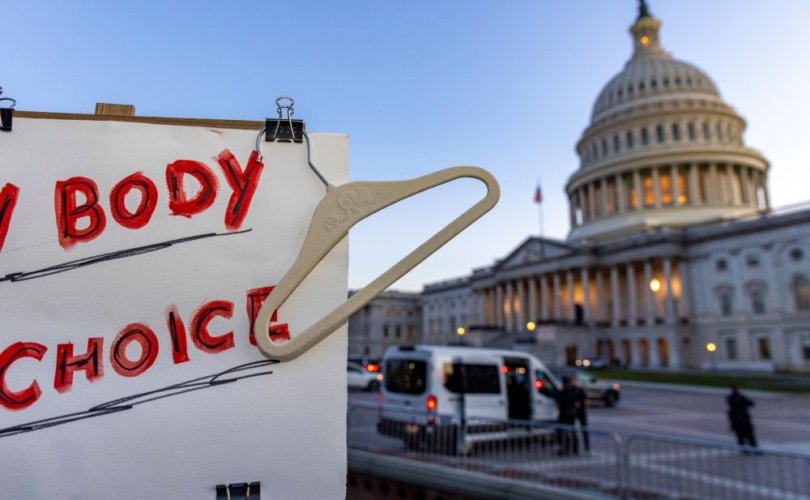 In a memo sent to House Democrats and obtained by Politico, the Pro-Choice Caucus led by Colorado Rep. Dianna DeGette and California Rep. Barbara Lee advised lawmakers to avoid using “harmful” language like “choice” and “unwanted pregnancy” when discussing abortion, or referring to dangerous “back alley abortions.”

Instead, the memo urged Democrat lawmakers to exchange the word “choice” for “decision,” and use the phrase “safe, legal, and accessible” instead of “safe, legal and rare.” Rather than “unwanted pregnancy,” lawmakers are advised to say “unexpected pregnancy.”

Democrats are also encouraged not to refer to laws protecting the religious rights of healthcare providers as a “conscience clause” or “conscience protections,” instead referring to such legislation as the “refusal” or “denial” of “care.”

Despite advocating for lawmakers to drop the use of the word “choice” in their abortion messaging, the Pro-Choice Caucus has not announced any plans to change its own name.

Twitters users have been quick to point out the irony that the so-called “Pro-Choice Caucus” would consider the word “choice” to be harmful to the abortion debate.

Pro-Choice Caucus decides its own name is harmful LOL https://t.co/uo1aDFcJWs

“The ‘pro-choice’ caucus doesn’t want Democrats to say ‘choice’… or for abortion to be rare,” Republican Rep. Jim Banks of Indiana also pointed out.

Meanwhile, the advice to update politically damaging rhetoric on abortion does not appear to have been met with universal approbation on the left.

Politico noted that some Democrats are “privately raising concerns about rebooting the party’s messaging on abortion at such a critical time,” when the Supreme Court appears ready to overturn the nationwide “right to abortion.”

According to the leak, at least a 5-4 majority on the Court is poised to rule in favor of Mississippi’s 15-week ban on abortion by overturning both Roe v. Wade, which established a federal “right to abortion” nationwide, as well as Planned Parenthood v. Casey, the 1992 decision that upheld Roe.

Pro-abortion advocates have responded to the leak by unsuccessfully attempting to codify abortion up to the moment of birth in federal law, engaging in protests, and in some cases vandalizing pro-life centers and Catholic churches.

Pro-life Supreme Court Justice Clarence Thomas last week responded to the leak of the draft opinion and subsequent protests by stating that the justices will not be “bullied.”

While it’s unclear when the Supreme Court will hand down its final decision in Dobbs, the Court is expected to release an unspecified number of rulings on Monday. Some anticipate the decision in Dobbs could therefore come as early as next week.

RELATED: With Roe v. Wade in the balance, Supreme Court announces next round of rulings coming Monday

Meanwhile, the advice for Democrats to shift messaging on abortion comes as a majority of Americans don’t believe that the practice should be legal under all circumstances.

A new NPR/PBS NewsHour/Marist Poll found that while three quarters of Americans reportedly oppose the overturning of Roe v. Wade, 61% want at least some restrictions on abortion.

Moreover, a recent RNC poll found that a staggering 85% of Americans reject the abortion-on-demand policies promoted by many Democrats.

This week, the U.S. Senate voted 49-51 against a Democrat bill that would have enshrined abortion-on-demand at the federal level and forced states to allow the practice to go on virtually unregulated.