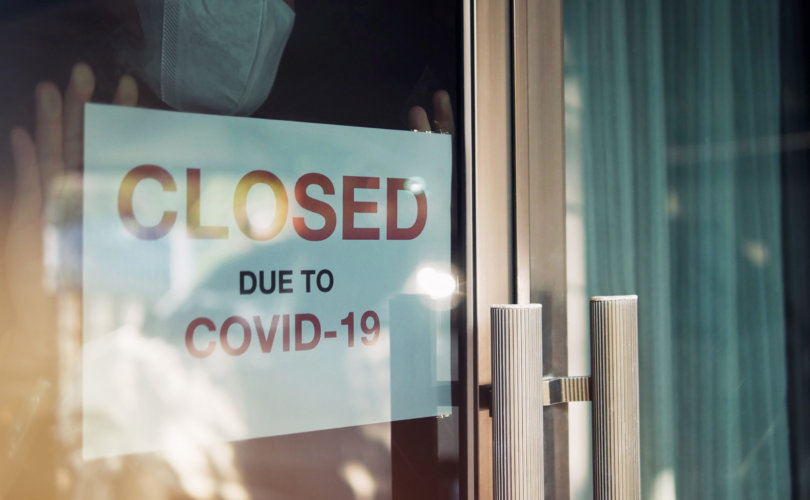 September 3, 2020 (LifeSiteNews) – Conservative commentator Dennis Prager argued in his most recent syndicated column that the COVID-19 lockdowns imposed across the United States nearly six months ago are no longer just a mistake.

“The lockdown is a crime,” the radio talk show host wrote. “But even more upsetting is that it is supported by so many Americans.”

“This country is unrecognizable to those of us who lived through the 1968-1970 pandemic, which killed, according to the Centers for Disease Control and Prevention, approximately 100,000 Americans – the 2020 equivalent of 170,000 Americans,” he summarized. “Nothing shut down. Not one mask was worn.”

Prager contrasted the approach to the coronavirus taken in Sweden with that adopted by his home state of California, coming to the conclusion that everybody should have followed the Scandinavian country’s example.

“That country never locked down and has even kept children under 16 in school the entire time,” he pointed out. “As regards teachers, Sweden's Public Health Agency reported that ‘a comparison of the incidence of COVID-19 in different professions suggested no increased risk for teachers.’”

In contrast, schools in California are still, for the most part, either exclusively teaching online or making use of smaller classes, with some students going to school and others staying home on a rotating basis.

Teachers in Los Angeles and other parts of the Golden State, Prager wrote, “refuse to enter a classroom that has students in it. Their disdain for their profession has been superseded only by that of the Los Angeles teachers union, which announced that teachers will not resume teaching until the police are defunded.”

Apart from schools, for about a month Sweden has reported “almost no deaths from COVID-19 while the entire society remains open and almost no one wears masks … For all intents and purposes, the virus is over in Sweden.”

Meanwhile, California is governed by Gavin Newsom, a Democrat – “that most dangerous of leaders: a fool with unlimited power.” The governor “has destroyed and continues to destroy tens of thousands of small businesses and untold numbers of livelihoods,” Prager emphasized.

He also called out politicians for their arbitrary standards to stop the spread of the virus.

“Why can people eat with no mask in an airplane – inches, not six feet, from strangers – but cannot eat in a California restaurant, which is so much bigger than the inside of an airplane, while sitting six feet from others?” he asked. “Because Newsom ordered it, the Los Angeles Times supports it and, like sheep, Californians have accepted it.”

Prager quoted Swedish doctor Sebastian Rushworth, who explained that people in his country have by now returned to normal life. Countries that imposed far-reaching lockdowns on their citizens acted unreasonably, he argued.

“Shutting down completely in order to decrease the total number of deaths only makes sense if you are willing to stay shut down until a vaccine is available,” Rushworth said. “That could take years. No country is willing to wait that long.”

In May, Prager had still maintained that the coronavirus lockdowns “may have been an enormous mistake,” or, “possibly, the worst mistake the world has ever made” – not going so far as to call them a crime.

“The lockdown is ‘possibly even more catastrophic (than the virus) in its outcome: the collapse of global food-supply systems and widespread human starvation’ (italics added),” wrote Prager at the time. “That was published in the left-wing The Nation, which, nevertheless, enthusiastically supports lockdowns.”

He accused the elites, not simply the left, of being “deceitful, cowardly and immature.”

Prager, in 2009, founded PragerU, an educational video outlet with a conservative viewpoint. YouTube has, in recent years, limited access to the videos posted on the Google-owned platform.

PragerU eventually filed several lawsuits on both the state and the federal levels against the company.

One of the complaints, filed with the Superior Court of California, argued that Google was “continuing to unlawfully restrict and restrain speech and expression on the global social media and video sharing platform known as YouTube.”

Fox News reported that PragerU accused Google of violating California state law in four ways, including “unlawfully restraining free speech in violation of the state’s constitution and discriminating against PragerU based on political, religious, ‘or other discriminatory animus’ in violation of California’s Unruh Civil Rights Act.”

Additionally, the lawsuit alleged that Google, which bought YouTube in 2006 for more than $1.6 billion, was “engaging in unlawful, misleading, and unfair businesses practices.” In 2019, YouTube generated roughly $15 billion in revenue.

The lawsuits were eventually dismissed by the courts.