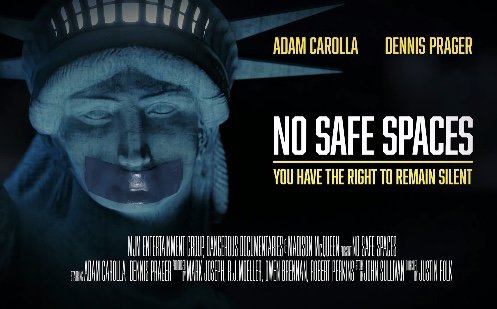 Prager is the founder of the online PragerU and is an inveterate critic of leftists and liberals, especially on college campuses. To promote his new film “No Safe Spaces,” Prager appeared Tuesday on “Fox & Friends.”

“There is an enormous distinction between liberal and left. Liberals and conservatives have far more in common than either have with the left. The left is a purely destructive force, whether it's America or Europe or anywhere else,” he said in reference to the politically correct culture on many campuses. “Liberals and conservatives may differ, but they have similar values.”

Prager said his movie is a “wake-up call” for Americans to take notice of the dangers posed by leftists on campus and elsewhere who seek to shut down free speech and rationale debate. He noted that most academics on campuses across the country are prejudiced against students espousing conservative views. Prager made light of how students who espouse leftism are allowed “safe spaces” where their ideas are left unchallenged. “The difference between kindergarten and college is the age of the 'kinder,'” he said.

As for so-called campus safe spaces, Prager said, “They're … not protecting (people with safe spaces),” adding, “They're simply censoring.” Prager asserted that radical professors preach ideas inimical American values. “They don't protect conservative students from 90 percent of the professors who teach them the following,” he said, “ … this is the message, really in America today, to American young people. Your past was terrible and your future is terrible.” Prager went on to say, “It is a tough time to be a young person in the greatest country in the world.”

On the trailer for the film, Prager says, “The only way to separate the good ideas from the bad ideas is to be free to say whatever we want about them.” One of the scenes in a montage in the trailer features a young woman who proclaims, “There is no free speech for a fascist!” In another clip, renowned legal expert and former Harvard professor Alan Dershowitz says, “No university should ever create a safe space. You’re not going to protect people.” Acclaimed psychologist and author Jordan Peterson refers to young people and their education, “The best you can do is make them strong.”

A teaser from the film can be accessed here.