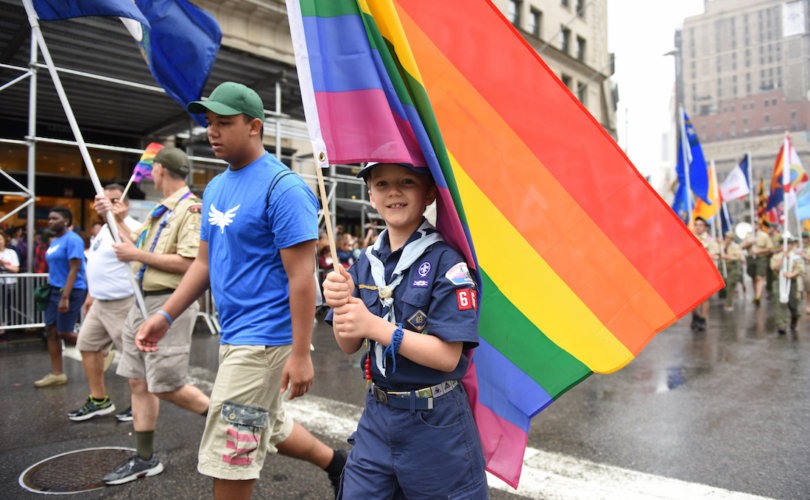 DENVER, Colorado, May 3, 2017 (LifeSiteNews) – The Catholic Archdiocese of Denver will only allow biological males and leaders who adhere to the Catholic Church's moral teachings to participate in its parishes' Boy Scouts troops.

Denver Archbishop Samuel J. Aquila announced the policy in an April 20 column. He blasted the Boy Scouts of America for admitting “girls who struggle with gender dysphoria and are living as though they are boys.”

Allowing gender-confused girls and troop leaders and scouts with same-sex attraction “are social experiments that are rationalized away without accounting for the impact on the clear majority of boys who do not have gender dysphoria or same-sex attraction,” Aquila wrote. “It is not hard to see that there will be lasting consequences for current and future generations of American boys as they try to understand their own sexuality in their formative years.”

“Discussions about sexual attraction, orientation, and lifestyle choices have no place in scouting,” he wrote. “These are issues that parents need to address, both through their own example and by teaching their children.”

Aquila wrote that many churches are conflicted about whether to continue being associated with the Boy Scouts, noting some Catholic dioceses have cut ties altogether.

“The Church is absolutely committed to the dignity of the human person, the understanding of man and woman as made for each other, the virtue of chastity and the protection of children, especially from different forms of abuse, which includes enabling and/or encouraging gender dysphoria,” he continued.

This means that the archdiocese must give witness to the Church's teaching through any allowance of Boy Scout troops at parishes.

“While I fear that the Boy Scouts may make another decision that will necessitate disaffiliation, I am not going to move in that direction at this time,” explained Aquila. “Instead, I am calling for all scouting groups sponsored by our parishes, including the Girl Scouts, to reinforce their commitment to forming boys and girls into virtuous Christian young adults.”

Pastors have the authority to decide whether they will allow a scouting troop at their parish. In order for troops to be able to continue affiliation with the Archdiocese of Denver, their leaders must follow the moral teachings of the Catholic Church and be supportive of the Church's teachings and works.

They must “refrain from approving, promoting or engaging in any conduct or lifestyle considered to be in contradiction with Catholic doctrine or morals.” They are required to “promote the dignity of the human person and expressions of human sexuality that accord with the natural law, and therefore with Catholic teaching.”

“To promote the best possible environment for their formation, all scouts” must also “have a positive and supportive attitude toward the Catholic Church, her teachings, and her work,” Aquila determined. They are to “refrain from conduct or living a lifestyle considered to be in contradiction with Catholic doctrine or morals” and “respect their own personal dignity and that of others.”

“We must be very careful about the example and witness we give to others, especially children,” Aquila warned, referring people to Luke 17:1-2. In that Bible passage, Jesus says “woe to the person through whom” sin comes and “it would be better for him if a millstone were put around his neck and he be thrown into the sea than for him to cause one of these little ones to sin.”

“To expose [children] to immorality and/or material inappropriate for their level of maturity, without the full knowledge and consent of parents, is scandalous to them and wrong for us,” Aquila continued. “Doing so also contradicts two of the principles of the Scout Oath – doing our 'duty to God' and remaining 'morally straight.'”

The full column can be read here.