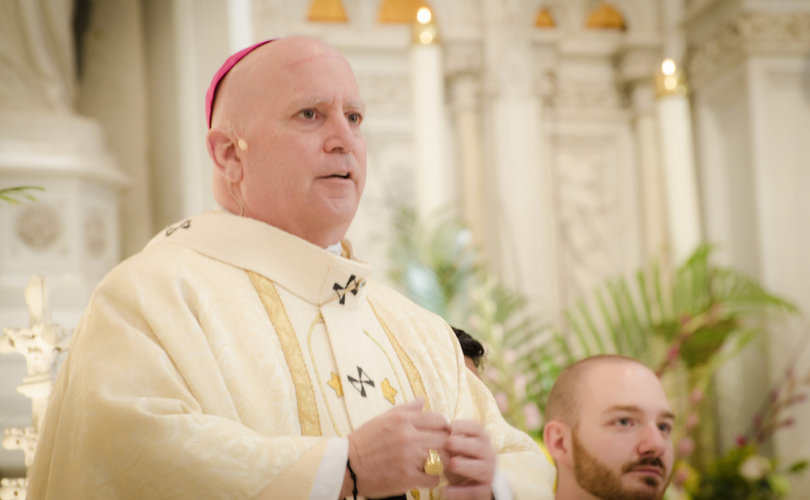 October 1, 2019 (LifeSiteNews) — Denver Catholic archbishop Samuel Aquila said recently that leaders in the German Church are risking damage to unity in the Church by trying to go their own way on Church doctrine in convening a controversial “synodal path.”

Cardinal Reinhard Marx, president of the German Bishops’ Conference and archbishop of Munich-Freising, had announced in March that the Catholic Church in Germany was open to revisiting Church teaching in the areas of contraception, cohabitation, and homosexual relationships and that the German bishops would discuss these topics in a series of discussions they are calling a “synodal path.”

The “synodal path” as it’s called, it is feared, will ultimately undermine Church teaching on sexual morality and other areas such as female ordination and priestly celibacy.

“Unfortunately recent developments in the Church in Germany, led by Cardinal Marx and most of the German bishops, risk damaging the unity of the Church universal,” Archbishop Aquila said. “These bishops and a sizeable group of lay people plan to hold a synod that takes binding votes on whether to change doctrinal matters like the ordination of women, blessings of same-sex unions and sexuality-related topics.”

Writing in his September 26 column, Aquila noted that Pope Francis had spoken recently about the dangers of schism, the pope saying he’d prayed it would not happen.

Aquila wrote, “In schisms there is a failure to listen to the voice of God and the authentic voice of the Holy Spirit, who always keep our eyes fixed on Jesus Christ.”

“One only need look at the history of those Protestant communities that are constantly splitting from each other over doctrine to see the impact of replacing the faith with societally acceptable beliefs,” the Denver archbishop said.

The Catholic bishops of Germany have been preparing since the March announcement to commence on a “binding synodal path” that questions Church teachings on priestly celibacy, women in ministry, and sexual morality.

The Vatican’s Congregation for Bishops recently warned the German bishops that their plans are “not ecclesiologically valid”; however, Marx defied the Vatican and responded that the German “synodal path” would go ahead regardless.

The German bishops on the whole have been extremely liberal over the years and have openly flouted Church teaching on sexuality and other issues a number of times.

They are involved to a significant degree in financing preparation for the upcoming Amazon Synod this month, which will consider some of the same topics as the Germany synod and has been criticized as being used by some as a vehicle to water down Catholic identity and circumvent Church teaching in the areas of priestly celibacy, women’s ordination, human sexuality, liberation theology, and pagan religions — with implications for the wider Church.

The German “synodal path,” it has been said, mirrors the upcoming Amazon Synod with an eye on “a restructuring of the Universal Church.”

Some faithful German bishops have warned against the “binding synodal path” and the Amazon Synod’s controversial working document, including Cardinal Walter Brandmüller, one of the two remaining dubia cardinals; Cardinal Gerhard Müller, former prefect for the Congregation of the Doctrine of the Faith; and Regensburg bishop Rudolf Voderholzer.

Back on 2015, prior to the two controversial Synods on the Family, Marx had also stated that Germany’s Catholic bishops might go their own way regarding allowing Holy Communion for those living in “irregular unions.” “We are not a subsidiary of Rome. The Synod cannot prescribe in detail what we should do in Germany.”

“It is disappointing that the German bishops have pledged in recent days to forge ahead with their plans,” said Aquila, “despite the intervention of Pope Francis and a letter from Cardinal Marc Ouellet that called their proposal “not ecclesiologically valid.”

He cited John 15:5–6, where Christ teaches, “I am the vine, you are the branches. Whoever remains in me and I in him will bear much fruit, because without me you can do nothing. Anyone who does not remain in me will be thrown out like a branch and wither…”

“One can easily observe in history that changing teaching to remain in step with the modern morality does not fill churches,” Aquila stated. “Only encountering Jesus Christ, remaining faithful to him no matter what the cost, and staying attached to the vine bears fruit and fills churches.”

Catholics have been leaving the German Church in high numbers in recent years, and Mass attendance is likewise markedly down. Vocations there have dropped parallel to the rising liberal reform to the Church pushed by much of its hierarchy there.

“It is vitally important that we remember our unity comes from remaining in relationship with the Father, Jesus and Holy Spirit, not from adopting the values of the world,” Aquila wrote in his column.

The Denver archbishop has been a reliable voice in support of the Church and its teaching.

He continued, “The unity of the Church is not just for our own sake, it’s also for the world, so that it will believe that the Father sent Jesus.”

“The antidote to this potential wound to the Body of Christ is seeking union with the three Persons of the Holy Trinity, who are the source of the Church’s unity,” said Aquila. “Those who remain in love with each person of the Trinity, do not seek out their own path.”

Aquila said we must put our faith in Jesus Christ “and be confident that he is faithful to his promises” and eschew what the world teaches.

“For the Church to remain united,” he said, “we must all strive to love and remain connected to Jesus Christ and his teachings and not those of the world.”