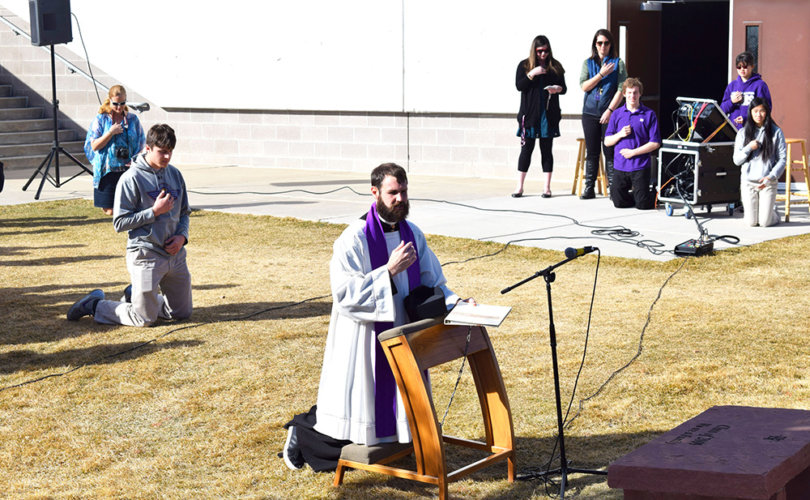 On March 14, many U.S. schools participated in a “walkout” of classes to focus attention on gun violence, particularly in schools and notably by students themselves. Some Catholic schools, however, offered their own unique contribution to the increasing threat: They prayed.

Denver’s Catholic school students both interceded for victims of gun violence and prayed for peace and security in schools on National Walkout Day. The day was designated by Youth EMPOWER, a group affiliated with the Women’s March, as an anti-gun protest.

Denver Archbishop Samuel J. Aquila and Denver Catholic Schools Superintendent Elias Moo encouraged priests and school administrators to have a 17-minute prayer vigil “for the conversion of hearts” and to pray for the souls of the slain “in lieu of a 17-minute walkout protest,” according to the Denver Catholic.

Holy Family High School in Broomfield followed the direction of their archbishop. A month after the Parkland tragedy, the entire student body stopped class to gather outside to beseech the Lord Jesus and His holy Mother.

Superintendent Moo explained that the appropriate Christian response to terror is to first turn to God. He added that what is at the core of the increasing wave of fatal school violence is “a battle for the soul of our society.”

“We believe the first and most important response can and should be to unite in prayer,” he said. “At the core of what our country is confronted with today is a great spiritual battle, a battle for the soul of our society and nation.”

Father McLagan offered a brief reflection in which he quoted Archbishop Charles J. Chaput of Philadelphia’s response to the Parkland school shooting. The archbishop noted that simply passing gun laws “will not solve the problem” of school killings, because the root of the problem is “we’ve lost our respect for human life.”

The day after Parkland, Chaput issued a statement that some have called his “spiritual state of the union address.”

“As a people, we have a lot to repent and confess. And let’s not lie to ourselves that tighter gun restrictions — as vital and urgent as they now are — will solve the problem. We’ve lost our respect for human life on a much broader scale, and this is the utterly predictable result.”

“A policy is only as good as the virtues in the people,” the priest pointed out. “If you don’t have a virtuous people, what expects your policy to be virtuous?”

“It starts with being on our knees and then going into action, not acting without going to our knees,” Fr. McLagan concluded.

“Instead of just walking out of class, we had a prayer vigil,” senior Ada Gonzalez explained. “We prayed for each of the people who died in the shooting in Florida.”

“This is the first time we’ve ever had a prayer vigil for something like this,” Gonzalez told Catholic News Service. “Hopefully, it was the last time we will have to do this.”