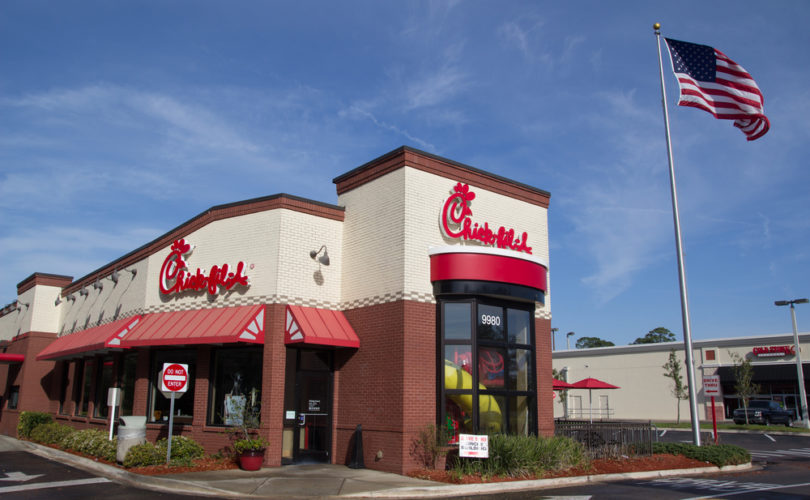 August 21, 2015 (LifeSiteNews) — Denver City Council, in a rare move, is stalling approval of a Chick-fil-A franchise at Denver International Airport (DIA), because of “concerns” over the owners' support for natural marriage.

City Council members have passionately argued against approving Chick-fil-A, saying it is a moral imperative for the council to ban the restaurant chain. Councilman Paul Lopez called opposition to Chick-fil-A, “really, truly a moral issue on the city.”

The council's openly homosexual member, Robin Kniech, was first to raise the issue at the council's Tuesday meeting. She said Chick-fil-A's support of traditional marriage was “discrimination,” and she didn't want “corporate profits used to fund and fuel discrimination.”

Kniech commented that Chick-fil-A was on the wrong side of “a national debate about depriving people and their families of rights.”

Normally, approval is routine, especially in the case of a restaurant which has a positive history – a Chick-fil-A franchise was at DIA a decade ago. But homosexual activists have targeted Chick-fil-A for boycott, because of CEO Dan Cathy's famous comment in 2012 that he supports the biblical definition of marriage.

No one at the meeting defended Chick-fil-A, or their right to their own viewpoint, or the First Amendment.

“The airport authority should stay out of politics,” advised Chris Gacek of the Family Research Council. He told LifeSiteNews that the committee should “stick to finding good food for travelers at their airport.”

“What the employees of the restaurant do with their charitable donations is none of the City’s business,” the FRC Senior Fellow told LifeSiteNews.

Gacek added, “Chick-fil-A is very popular because they serve their customers well.”

Efforts to block Chick-Fil-A are not new. City leaders in Chicago attempted to block a new Chick-fil-A location for similar reasons three years ago, and mayors in Boston and San Francisco vowed to fend off any foray by Chick-fil-A into those cities.

The issue also continues to flare on some university campuses. Johns Hopkins University Student Government has called on school adminstrators to ban the restaurant chain from campus, citing support of traditional marriage as the sole reason for administrators to halt any discussions or plans to allow the restaurant at the university.

Opposition to Chick-fil-A has also reached high schools. A California principal has even banned donations to help Ventura High School's booster club from a local Chick-Fil-A, because of their “political stance on gay rights.”

But legal experts say that, at least at present, American law still allows company leaders freedom of speech and opinion.

Mike De La Rosa, who hopes to bring Chick-fil-A back to DIA, assured council members that no discrimination on the basis of sexual orientation will occur.  “Any and all hiring, promotion — any and all of those decisions are made by us,” he said. “We have a long history of diversity.”

Chick-fil-A issued a brief statement that they are “focused on providing everyone great food in an atmosphere of genuine hospitality. We hope to welcome all guests to any of our locations, including a proposed licensed location at the Denver International Airport.”

A 2013 survey of flight passengers picked Chick-fil-A as the second-most looked-for quick food restaurant at DIA. The most sought-after quick service restaurant was Chipotle, which didn't apply for the space, according to Neil Maxfield, the senior vice president of concession at DIA.

Mozilla chairman Brendan Eich resigned under LGBT activist pressure after they discovered that he had donated $1,000 to California's Proposition 8, which defined marriage as the union of one woman and one man.

The Denver City Council committee's next meeting is September first.