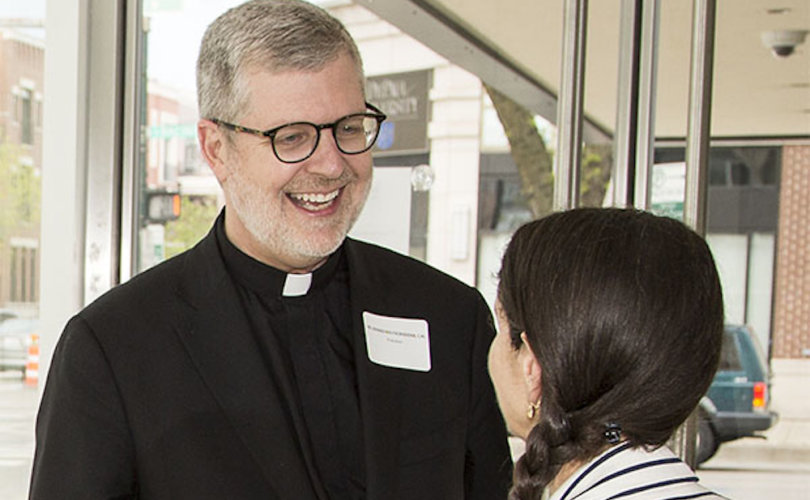 Vincentian Father Dennis Holtschneider has served as president of DePaul University since 2004.DePaul.edu

CHICAGO, Illinois, October 18, 2016 (LifeSiteNews) – College Republicans at DePaul University were prohibited by the university president from displaying posters on campus advertising their group with the pro-life message, “Unborn Lives Matter.”

Vincentian Father Dennis Holtschneider indicated to the university community on Friday in a letter that the “Unborn Lives Matter” message constituted “bigotry” occurring “under the cover of free speech,” The Daily Wire reports.

The College Republicans followed protocol in submitting the design for approval to promote the group, its pro-life views, and its meeting times before hanging the posters on campus.

However, the request made its way to Father Holtschneider, who responded that the administration would protect the university community from the pro-life message’s bigotry, the report said, and that the pro-life poster “provokes” members of the controversial Black Lives Matter political movement, the message of which is allowed on campus.

“By our nature, we are committed to developing arguments and exploring important issues that can be steeped in controversy and, oftentimes, emotion,” Father Holtschneider’s letter said. “Yet there will be times when some forms of speech challenge our grounding in Catholic and Vincentian values. When that happens, you will see us refuse to allow members of our community to be subjected to bigotry that occurs under the cover of free speech.”

Father Holtschneider, president of the nation’s largest Catholic university since 2004, went on to mention the recent banning of a speaker and asking students to redesign another banner that reportedly “provokes the Black Lives Matter” movement in his rationale, and linked to the University’s “Guiding Principles on Speech and Expression” document before asking students to consider a statement that apparently assumes the Unborn Lives Matter message is hurtful and inconsistent with Catholic values.

“We accept that there is a distinction between being provocative and being hurtful,” he said. “Speech whose primary purpose is to wound is inconsistent with our Vincentian and Catholic values.”

LifeSiteNews asked the university for a copy of the letter and clarification on how the pro-life message was hurtful and inconsistent with Catholic values, and how, given both messages purport to convey that lives matter, one is acceptable on campus while another is not. The administration did not respond to several requests.

John Minster, vice president of the college Republicans, told The Daily Wire the letter from Father Holtschneider amounted to “shaming” the student group

“Once again, DePaul University has shown its true colors,” Minster said, pointing out that the civil liberties non-profit Foundation for Individual Rights in Education had said DePaul University might be the worst school for free speech in the nation.

Minster continued, “Rather than standing up for the pro-life and free speech ethics this ‘Catholic’ university claims to uphold, administration has bent the knee to radical leftists, banning more speech despite the pro-life message.”

Minster provided a photo to The Daily Wire showing a Black Lives Matter poster on the window of DePaul’s Center for Identity, Inclusion, and Social Change office.

“Some people will say that DePaul’s stance unfairly silences speech to appease a crowd,” Father Holtschneider also said in Friday’s letter. “Nothing can be further from the truth.”

The banning of the students’ pro-life poster is not the first message conflicting with Catholic principles generated from DePaul University. This year’s scheduled commencement honoree was alumnus Martin Castro, chair of the U.S. Commission on Civil Rights (USCCR), who has used his position to advocate for same-sex “marriage” and gender ideology.

Last year, the university proposed a policy allowing students to choose preferred gender pronouns and change their names up to three times for use on class rosters and other college records, despite the fact that “gender theory” contravenes Church teaching on human sexuality.

DePaul was on a list of colleges found last year by the Cardinal Newman Society (CNS) to have an internship and/or a job referral link to Planned Parenthood, and CNS also found last year that DePaul had encouraged students via social media posts to advocate same-sex “marriage” and take part in LGBT pride parades and marches.