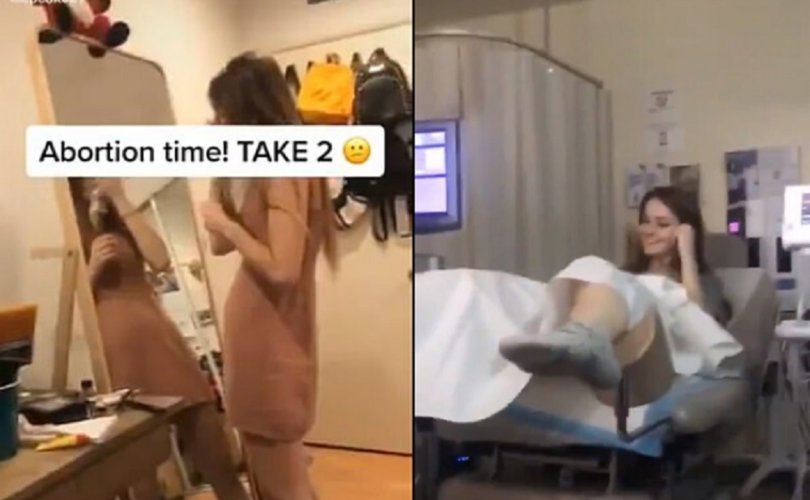 March 5, 2020 (Society for the Protection of Unborn Children) — An online video has surfaced which shows a young woman dancing in an abortion clinic and smiling as her unborn baby is killed during an ultrasound guided surgical abortion. Eden Linton, SPUC Youth and Education Officer said: “This video is grotesque. For any person to celebrate and smile as an innocent human is torn apart is utterly depraved.”

The video, which was posted the on the social media platform, TikTok, is captioned, “Abortion Time! Take 2”. The footage shows the girl cradling her early pregnancy bump and laughing in a car as she arrives at a Planned Parenthood abortion clinic. She is then seen dancing in celebration in the waiting room, whilst another couple sat sadly in the corner. The footage shows the ultrasound-guided abortion where the baby is then sucked from the womb. The girl is seen smiling cheerfully on the bed with her legs in stirrups.

The video has been viewed millions of times and has sparked controversy across social media with many users reporting that they were disturbed by the footage.

Ms Linton said: “Watching a mother smile and dance whilst her unborn baby is sucked through a tube is a reflection of just how depraved the ‘pro-choice’ culture has become. An entire generation has been indoctrinated to believe that abortion is something to be celebrated, and footage like this is the result.

“TikTok is currently one of the most popular social media platforms, which is tailored specifically for very young children and teenagers to use. It is worrying to think of the millions of young children who have viewed this video and similar content.

TikTok is a social media platform which is used by children and teenagers to post and share short video clips. Since its launch in 2018, TikTok has risen to incredible levels of popularity with over 500 million people using the platform each month.

Amongst its users are pro-abortion activists who have used the platform to create and share disturbing abortion content.

In February, another TikTok video sparked controversy after the footage showed a pregnant woman finding out the sex of her unborn baby and having a surprise abortion at the end. A range of ‘humorous’ abortion content is also rife throughout the platform which includes girls meeting aborted foetuses in the afterlife and ‘best friend’ abortion appointments where young teenage girls video themselves going to abortion clinics on a day out.