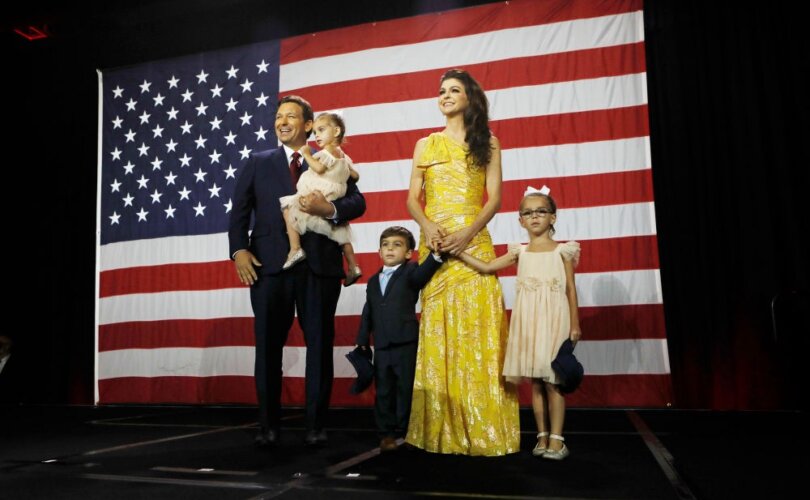 (LifeSiteNews) — Florida Republican Gov. Ron DeSantis, who soared to re-election victory Tuesday after trouncing his Democratic challenger by an historic 19-point margin, is proving he might have a magic touch when it comes to political endorsements.

All six of the school board candidates tapped by DeSantis won their runoffs handily on November 8. The candidates who won the governor’s endorsement are anticipated to buck left-wing ideology in favor of “back-to-basics” curricula and the expansion of parental rights, central planks of DeSantis’ conservative pro-family agenda.

“Governor Ron DeSantis shattered election records and produced a win for the ages,” a spokesperson for DeSantis told The Daily Signal on Wednesday. “He also led a coalition of parents to establish students-first, parents’ rights school board governance across the state. The DeSantis Education Agenda was on the ballot and the voters made their voice clear: we want education, not indoctrination.”

CLEAN SWEEP: All six of the school board candidates Ron DeSantis endorsed won in Florida Tuesday in a key victory for #ParentalRights #Midterms2022 https://t.co/ozFFrEzYd6

The outlet pointed out that while school board elections have historically focused on local instead of national issues, the COVID-19 pandemic response and worries about radical curriculum items have launched small-scale elections like school board races into the national conversation.

DeSantis, who has vehemently fought against so-called “woke” ideology and earlier this year signed the Parental Rights in Education bill to prevent the indoctrination of young children into radical LGBT ideology, seems to be the first governor of the Sunshine State to formally back candidates for local school boards.

Two of Florida’s new school board members spoke to “Fox & Friends” on Thursday about the effect of the governor’s endorsement on their campaigns.

“Governor DeSantis’ education plan aligns with the work that I had been doing all along on the school board, so it makes sense to endorse me, and I’m grateful for his endorsement, and I’m just happy that we won,” said Jackie Rosario of Florida’s Indian River County.

Cindy Spray of Manatee County told Fox that DeSantis’ support was the key factor in putting her campaign “over the edge.”

Meanwhile, the six pro-family school board candidates who scored their wins after earning the governor’s support weren’t the only ones to do so in 2022.

DeSantis backed a total of 30 school board candidates during the broader election cycle, 25 of whom ultimately triumphed in their elections.

The success rate dwarfs that of Florida Democrats. According to The Daily Signal, just six of the Democrats’ 20 endorsed candidates won their races, though two races still hung in the balance at the time of the report.

Ensuring that parents have the right to determine the kind of materials provided in public and private school classrooms and libraries have become a core issue motivating American parents across the country worried about their children being exposed to sexually explicit content and radically left-wing ideological positions on issues like sexuality and race.

In addition to DeSantis, national conservative groups like Moms for Liberty and the 1776 Project also endorsed a bevy of candidates throughout Florida this year.

Moms for Liberty founder Tina Descovich told The Daily Signal that Tuesday’s school board wins suggest “that 2022 is the year of the parent.”

“We are thrilled to have so many new school board members that will finally put students first and respect the fundamental right of parents to direct the upbringing of their children,” she said.

In his Tuesday night victory speech after his historic re-election, DeSantis chalked up his success to having led a government that has “embraced freedom” and fought “woke ideology.”

“We will never ever surrender to the woke mob,” DeSantis said. “Florida is where woke goes to die!”