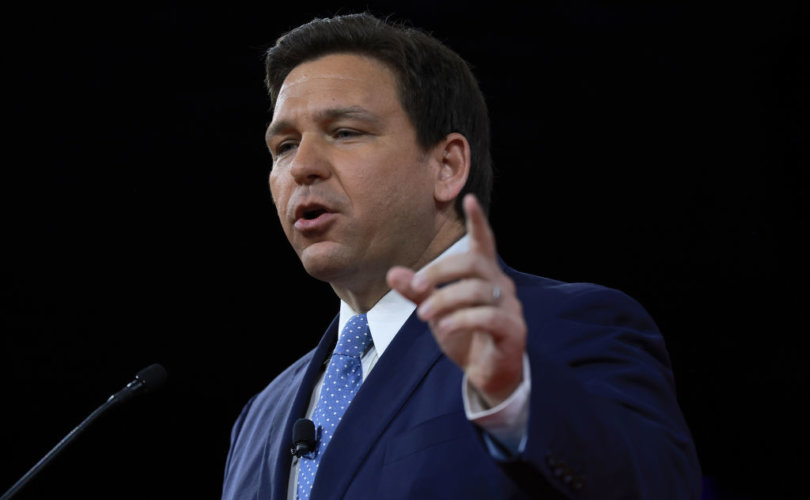 During a March 10 event in Orlando, Florida, the home of Disney’s sprawling 27,000 acre Disney World resort, the firebrand governor said the Sunshine State won’t base its policy on “the musings of woke corporations,” and blasted the mega-corporation for its relationship with the brutal Chinese Communist Party (CCP) regime.

“So here’s what I can tell you: In the state of Florida, we are not going to allow them to inject transgenderism into kindergarten,” DeSantis stated in a video obtained by Fox News Digital.

“First-graders shouldn’t have woke gender ideology imposed in their curriculums, and that is what we’re standing for, because we’re standing for the kids and we’re standing for the parents,” said DeSantis, who has generated widespread support among conservatives for fighting liberty-crushing COVID-19 measures, backing law enforcement, favoring measures limiting abortion, and working to uproot radical ideologies from the classroom.

In a video exclusively obtained by @FoxNews Digital. @GovRonDeSantis slams #Disney saying “In Florida, our policies got to be based on the best interest of Florida citizens, not on the musing of woke corporations.” pic.twitter.com/Op87xgsLzB

The Florida governor’s comments came in response to criticism from Disney CEO Bob Chapek, who earlier this week expressed “disappointment” with Florida’s legislative moves to keep radical sexual ideology out of the classroom for young children.

The Daily Wire reported that Chapek told shareholders on Wednesday he had called DeSantis that morning to articulate Disney’s “disappointment and concern” with the Parental Rights in Education bill, dubbed the “Don’t Say Gay” bill by critics, which was passed by the Florida Senate in a 22-17 vote on Tuesday.

According to Chapek, if the bill is signed into law, it “could be used to unfairly target gay, lesbian, non-binary and transgender kids and families,” CNN reported.

To solidify his opposition to Florida legislation and affirm his support for pro-gay causes, Chapek on Wednesday announced plans to donate $5 million to “for work to protect the LGBTQ+ community.”

Christina Pushaw, a spokeswoman for the governor’s office, responded to Chapek’s comments in a statement Wednesday, noting that the governor has no plans to back down from signing the legislation, and slamming the “family-friendly” corporation for opposing the measure.

“Disney contacted our office today to speak with the governor,” Pushaw said. “The governor’s position has not changed.”

“Disney is known as a family-friendly company that creates wholesome entertainment for kids,” Pushaw continued. “The same Florida parents who take their families to Disney also support parental rights in education, because they do not want their young children exposed to inappropriate content about sex and gender theory at school. We expect Mr. Chapek will carefully consider their concerns.”

In his comments in Orlando on Thursday, DeSantis, who many see as a strong contender for the U.S. presidency in 2024, also highlighted Disney’s “family-friendly” ethos, suggesting that that sensibility conflicts with opposing a bill designed to protect young children from exposure to radical sexual ideologies like transgenderism.

“[W]hen you have companies that have made a fortune off being family-friendly and catering to families and young kids, they should understand that parents of young kids do not want this injected into their kids’ kindergarten classroom,” DeSantis said. “They do not want their first-graders to go and be told that they can choose an opposite gender. That is not appropriate for those kids. So if you’re family-friendly, understand that parents who are actually raising families want to have their rights respected.”

“And I also think that you have companies like Disney that are going to say and criticize parents’ rights; they’re going to criticize the fact that we don’t want transgenderism in kindergarten and first-grade classrooms,” he added.

The Florida governor went on to blast Disney for its relationship with the Chinese Communist Party (CCP), whose treatment of its Uighur Muslim population, many of whom have been placed in camps and subjected to torture and forced abortion and sterilization, is widely recognized as genocide.

Disney has drawn widespread criticism for filming its live-action Mulan reboot in China in the Xinjiang province in which Uighur Muslims are reportedly oppressed, and then thanking the “publicity department of CPC Xinjiang Uighur Autonomy Region Committee.”

Critics have also slammed the corporation for scrubbing content deemed unacceptable by the Chinese government.

The new Mulan movie was filmed in the region where China has Uyghur internment camps and there are “special thanks” for a Xinjiang government agency in the credits.@Disney, can you show us your human rights due diligence report?https://t.co/7IaPsYQtKW

“If that’s the hill that [Disney is] going to die on, then how do they possibly explain lining their pockets with their relationship from the Communist Party of China?” DeSantis asked rhetorically, adding, “Because that’s what they do and they make a fortune; they don’t say a word about the really brutal practices that you see over there at the hands of the CCP.”

“And so in Florida, our policy’s got to be based on the best interest of Florida citizens, not on the musing of woke corporations,” the governor said.