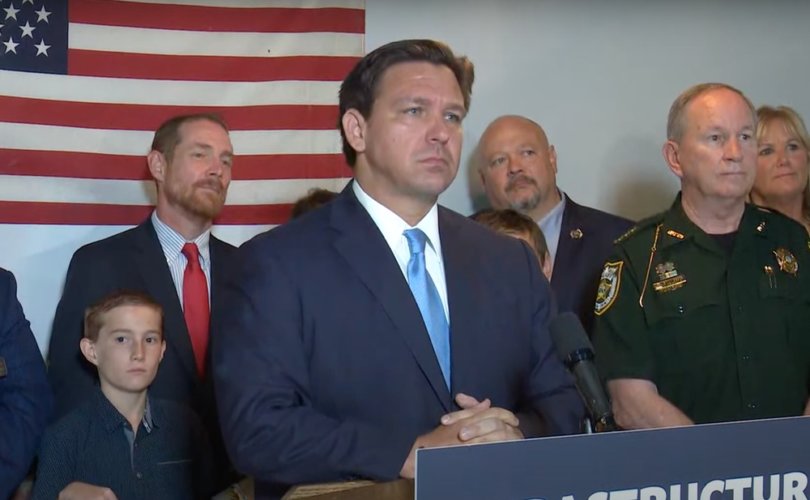 CALLAHAN, Florida (LifeSiteNews) — Florida Republican Gov. Ron DeSantis on Monday blasted legacy media outlets and the Biden White House for inaccurately stating that Florida had gone back on its decision not to pre-order experimental COVID-19 shots for babies and young children.

Reiterating that the Florida Department of Health recommends against vaccinating young children against COVID-19, DeSantis said Florida is “not going to have any programs where we’re trying to jab six-month-old babies with mRNA. That’s just the reality.”

The popular Republican governor explained that medical practitioners can and have always been able to order the drugs for patients in Florida. However, he cautioned that those interested in getting the injections for their young children should explore the data used to authorize the shots, which he called “the weakest possible data that you could possibly see.”

Adding that the state government doesn’t have the authority to prohibit the jabs for children, DeSantis said he trusts Floridians to examine the data and make their own decisions.

Orders started coming in from all states except Florida as the U.S. Food and Drug Administration (FDA) mulled whether to green-light the injections for young children. The FDA has since approved the Moderna and Pfizer shots for children ages six months and up.

READ: Florida becomes only US state to not pre-order COVID shots for infants and young children

However, on Wednesday, diverging from every other U.S. state, Florida’s Department of Health (DOH) announced that it would not participate in the rollout of COVID drugs for babies and young children, LifeSiteNews reported.

“States do not need to be involved in the convoluted vaccine distribution process, especially when the federal government has a track record of developing inconsistent and unsustainable COVID-19 policies,” the DOH statement said. “It is also no surprise we chose not to participate in distribution of the COVID-19 vaccine when the Department does not recommend it for all children.”

On Thursday, Gov. DeSantis backed up the decision of the Florida DOH, arguing that “the risks outweigh the benefits” and that parents who are concerned about their kids contracting the coronavirus “are really frightened … because of media hysteria, it’s because of a lot of misinformation.”

DeSantis, who has generated strong support from conservatives in large part thanks to his moves to defend liberty against draconian COVID-19 mandates and restrictions, faced pushback from left-wing figures and media outlets for opting out of ordering injections for infants and young children.

Shortly after Florida took a stand against ordering the jabs for young children, however, legacy media outlets began reporting that DeSantis had backpedaled.

McClatchyDC reported that “White House officials” told the outlet DeSantis had reversed course, and would now permit “healthcare providers — including pediatricians and children’s hospitals — to order COVID-19 vaccines from a federal program for children between six months and 5 years old.”

However, according to the Florida Governor’s Office, those reports were not true.

“NOTHING has ‘reversed’ or changed,” Pushaw said. “The State of Florida is not placing any orders of covid shots for 0-5 year old babies & kids.”

“What they have couched as a reversal is actually the Governor’s steadfast position that the State of Florida does not recommend nor distribute shots for babies,” she explained. “Any healthcare provider that wants the vaccines can obtain them and any parent who wants it for their child can get it.”

What they have couched as a reversal is actually the Governor’s steadfast position that the State of Florida does not recommend nor distribute shots for babies. Any healthcare provider that wants the vaccines can obtain them and any parent who wants it for their child can get it.

The push to vaccinate young children comes despite the fact that children face a vanishingly low risk from COVID-19. This combined with the thousands of reports of serious adverse events and deaths after the jabs has led numerous experts to criticize the push to inject children with the experimental shots.

Between 0.00%-0.02% of child COVID cases in the United States have resulted in death, according to the American Pediatric Association.

Days before the federal government decided to authorize the experimental COVID-19 shots for young children, an analysis of reports submitted to the U.S. government’s Vaccine Adverse Event Reporting System (VAERS) stated that at least 58 infants under age three have already suffered life-threatening adverse events after receiving the mRNA coronavirus injections.

On Saturday, the CDC officially agreed with the FDA, approving the experimental COVID-19 shots for infants as young as six months old.