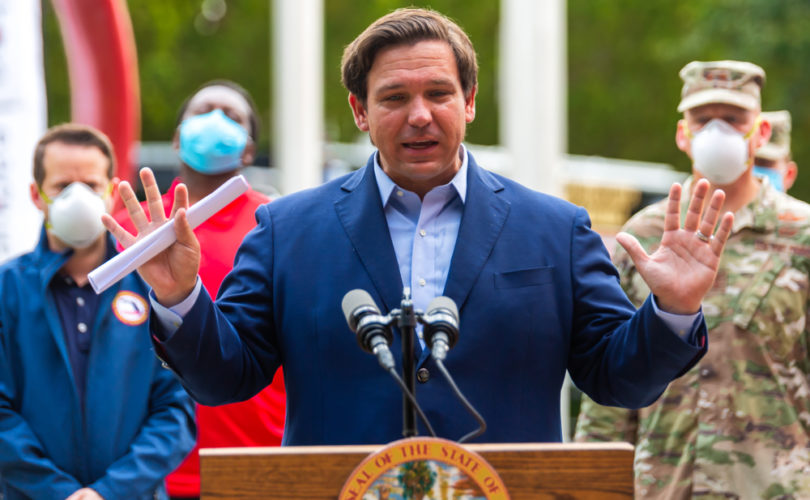 (LifeSiteNews) — Florida Republican Gov. Ron DeSantis’s focus on getting Floridians back to work appears to be paying off.

While the United States continues to suffer under rising inflation and meager overall jobs numbers, Florida — which has sworn off COVID-19 mandates and restrictions — continues to report record job gains and a steadily decreasing unemployment rate.

Data released by Florida’s Department of Economic Opportunity (DEO) on Friday revealed that Florida’s economy surged at a rate three times faster than the rest of the nation in September. With the nation gaining 194,000 new jobs in September, Florida gained 84,500, marking 17 months of private sector job growth in the state.

Florida is driving the nation’s economy forward – the nation reported adding 194,000 jobs in September and Florida alone accounted for: pic.twitter.com/dLKWNzgL6k

“We are outpacing the nation in job growth and job opportunities because businesses know that Florida will stand up for them,” DeSantis said in a statement Friday.

“Despite tremendous national headwinds and economic uncertainty, Florida has reached a level of job growth only seen on four other occasions in the past 30 years. We will continue to work hard to keep Florida open, free and built for opportunity,” he added.

In its Friday press release, the DEO suggested that Florida’s “substantial increases in labor force” in comparison with lagging overall U.S. economy means that more Floridians “are actively returning to seeking work and confident in the state’s economy providing them with the ability to find new employment.”

“While Florida continues to see consistent labor force gains, the nation saw a drop in labor force, which can be a sign that other states’ job seekers are losing confidence in employment opportunities and have stopped looking for work,” the statement added.

According to the data released by the DEO, Florida’s private sector job growth rate was 0.9% compared with the national rate of 0.3% for the month.

Among the state’s new jobs 84,500 last month, 72,700 were added in the private sector, including 26,600 Leisure and Hospitality jobs, 19,200 in the Trade, Transportation, and Utilities field, and 10,400 new Professional and Business Services roles.

“Florida has experienced 11 consecutive months of labor force increases, adding 50,000 workers over the month,” the governor’s office noted, adding that “Florida’s labor force growth represents a 5.4% increase over-the-year, which is significantly higher than the national rate of 0.8%. In total, Florida has gained more than one million jobs since April 2020.”

“This month marks 17 months of private-sector job growth, increasing by 5.6% over the year,” the press release noted.

In September, Florida reached a level of job growth only seen on four other occasions in the past 30 years.

We will continue to work hard to keep Florida open, free, and built for opportunity. pic.twitter.com/Fu5dGiKSc4

In joblessness numbers, the Sunshine State’s unemployment rate inched downward last month from 5.0% to 4.9%, which is 0.1% higher than the national average of 4.8%.

Meanwhile, Texas, which has focused as Florida has done on restoring its economy and preserving the freedoms of residents instead of imposing crippling COVID-19 measures, saw 95,000 jobs added last month, with its unemployment rate falling to 5.6%.

📈Texas added over 95,000 jobs in September, the most in the nation

Texans are getting back to work as our economy continues to BOOM.#TexasWorkshttps://t.co/3MuqbvAksX

News of Florida’s successful economic numbers comes as the number of new coronavirus cases in the state takes a nosedive compared with higher summer reports.

Without top-down lockdowns, mandates, or other restrictions, it is possible Florida’s high summer rates of positive COVID-19 tests, compared with its rapidly dissipating fall numbers, point to the natural ebb and flow of respiratory pathogens related to weather patterns.

As jobs numbers soar and COVID-19 numbers plummet, Gov. DeSantis shows no signs of backing down from his hard-nosed approach to enacting laws to protect the freedoms of Floridians to work, move about freely, and make their own medical decisions.

On Thursday, DeSantis announced the GOP-led Florida legislature will hold a Special Session to enact further protections for Floridians against COVID-19 injection mandates from both government and corporate entities.

Click Orlando reported that “[i]n broad terms,” the special session will be focusing on “holding businesses liable for adverse reactions to vaccines, removing legal liability protections for employers with vaccine mandates and added protections for people who are fired for not being vaccinated.”

“I will not let the heavy hand of government force Floridians to take a shot,” DeSantis wrote in a Saturday tweet. “That violates their constitutional rights, infringes on their medical freedom, and threatens their livelihoods. We will hold a Special Session to fight for Floridians’ freedom. #DontTreadOnFlorida.”

I will not let the heavy hand of government force Floridians to take a shot. That violates their constitutional rights, infringes on their medical freedom, and threatens their livelihoods.

We will hold a Special Session to fight for Floridians’ freedom. #DontTreadOnFlorida pic.twitter.com/b8Owjxniqg

Meanwhile, as crushing labor shortages and crippling COVID-19 restrictions have contributed to an historic number of logjammed cargo ships waiting to unload at California ports, Gov. DeSantis is offering incentive packages to encourage the ships to dock at Florida ports, which he said are open 24-7 and have the capacity to alleviate what may otherwise become a major supply chain disruption.

“We’re here. We have capacity,” DeSantis said during a stop at the Jacksonville Port Authority on Tuesday.

“We have to make sure people can go Christmas shopping as normal. We have to make sure that all the necessities are there,” DeSantis said. “And if it’s because ships are sitting off the coast somewhere else, and they can be rerouted here, and we can get all those shelves stocked, then we want to be a part of that solution.”