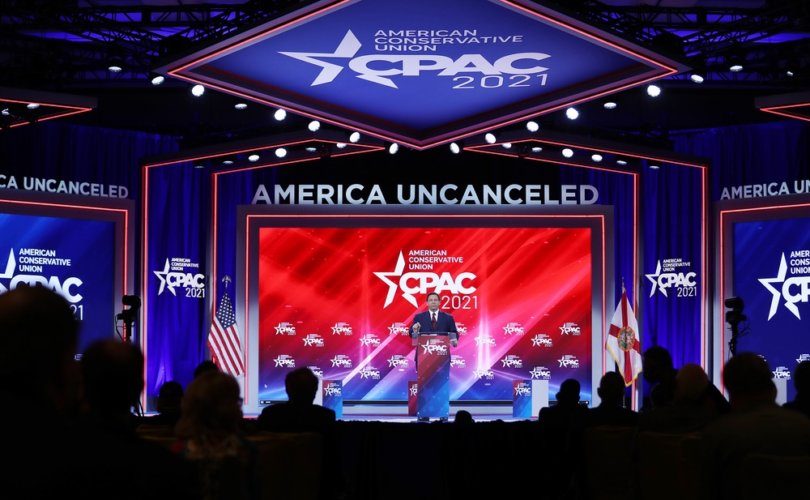 February 26, 2021 (LifeSiteNews) – The annual Conservative Political Action Conference (CPAC) is underway, with the first day’s speakers encouraging the crowd to stay active and optimistic about the future, despite Democrats’ current control of the federal government.

Sen. Ted Cruz (R-TX) energized the crowd with his assurances that former President Donald Trump “ain’t going anywhere,” and his confidence that “defending liberty” can unite the disparate elements of the political Right while waiting for their opportunity to retake Congress and the White House:

Sen. Ted Cruz (R-TX) says “a whole lot of voices in Washington” are “terrified” of Trump:

What do we do during this time where the WH is being driven by the radical Left?

Florida Gov. Ron DeSantis, a potential 2024 presidential contender, used his speech to honor the memory of conservative media giant Rush Limbaugh, tout his administration’s handling of the COVID-19 crisis, and outline a future for the GOP unshackled by the priorities of the party establishment:

“Rush showed that fighting the left required strength, and that conservatism devoid of backbone is doomed to fail.”

DESANTIS: “Florida got it right and the lockdown states got it wrong.” #CPAC2021
pic.twitter.com/dhwsIbNAxz

“We reject open borders and instead support American sovereignty and the American worker. Building a movement on the foundation of amnesty and cheap foreign labor is like building a house on a field of quicksand.” #CPAC2021pic.twitter.com/f1mVwSWii2

“We don’t spout hollow rhetoric. We take decisive action,” DeSantis said of the new breed of Republican he represents. “We cannot, we will not go back to the days of the failed Republican establishment of yesteryear.”

Aside from the speeches, LifeSite’s own Stephen Kokx caught up with Terry Schilling of the American Principles Project to discuss the so-called “Equality Act,” which the House of Representatives passed Thursday. “The so-called Equality Act is probably the biggest threat to all our civil liberties,” Schilling said. “It’s a total disaster, and we have to do everything we can to kill it.”

The crowd also let CNN’s Jim Acosta, who was on site to cover the event, know what they thought of the mainstream media by breaking into an anti-CNN chant:

Trump is slated to address CPAC on Sunday, in his first major public address since leaving office.

“President Trump will be laying out … a future path for the Republican Party,” Trump adviser Jason Miller says. “We want to go and win back the House and the Senate for Republicans in 2022, but there are … a few places where there may be Republican-held seats where we could get a good ‘America First’ upgrade.”