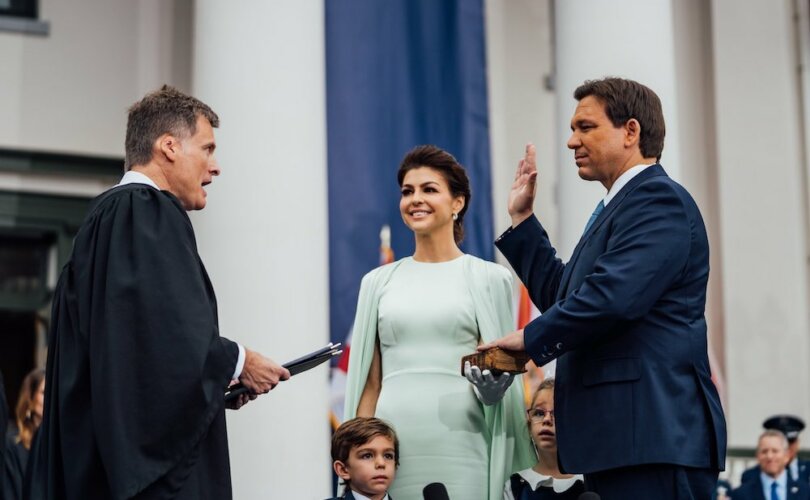 TALLAHASSEE, Florida (LifeSiteNews) – Republican Ron DeSantis delivered a forceful inaugural address Tuesday for his second term as Florida’s governor, laying out a proactive conservative vision for the state in remarks that many took as a vision for the entire country.

“Freedom lives here, in our great Sunshine State of Florida,” DeSantis declared. “Over the past few years, as so many states in our country grinded their citizens down, we in Florida lifted our people up. When other states consigned their people’s freedom to the dustbin, Florida stood strongly as freedom’s linchpin. When the world lost its mind – when common sense suddenly became an uncommon virtue – Florida was a refuge of sanity, a citadel of freedom for our fellow Americans and even for people around the world.”

“And now we are here today because the people of Florida have validated our efforts in record fashion,” he added, referencing his landslide 19-point, 1.5-million-vote re-election last month, which contrasted starkly with the Republican Party’s overall underperformance across the rest of the country.

Fired up crowd at the inauguration for Governor DeSantis: pic.twitter.com/Uuj7rohFKd

“And we are far from done.”

DeSantis went on to pledge further work to promote tax relief, non-ideological education, and more, including “defend[ing] our children against those who seek to rob them of their innocence,” presumably a reference to actions such as the state recently opening an investigation into a sexually charged drag show that welcomed minors and billed itself as for “all ages.”

DeSantis specifically targeted “woke ideology” that “purports to act in the name of justice for the marginalized, but it frowns upon American institutions, it rejects merit and achievement, and it advocates identity essentialism.”

“We seek normalcy, not philosophical lunacy!” the governor declared. “We will not allow reality, facts, and truth to become optional. We will never surrender to the woke mob. Florida is where woke goes to die!”

DeSantis, speaking at his inauguration: "We reject this woke ideology. We seek normalcy, not philosophical lunacy. We will not allow reality, facts, and truth to become optional. We will never surrender to the woke mob. Florida is where woke goes to die!" pic.twitter.com/YiylSbblVs

He accused the currently Democrat-dominated federal government of making Florida’s success more difficult: “The federal government has gone on an inflationary spending binge that has left our nation weaker and our citizens poorer, it has enacted pandemic restrictions and mandates – based more on ideology and politics than on sound science – and this has eroded freedom and stunted commerce.”

“It has recklessly facilitated open borders, making a mockery of the rule of law, allowing massive amounts of narcotics to infest our states, importing criminal aliens, and green-lighting the flow of millions of illegal aliens into our country, burdening communities and taxpayers throughout the land,” he went on.

“It has imposed an energy policy that has crippled our nation’s domestic production, causing energy to cost more for our citizens and eroding our nation’s energy security, and, in the process, our national security,” he said.

“Now fighting for freedom is not easy because the threats to freedom are more complex and more widespread than in the past – the threats can come from entrenched bureaucrats in D.C., jet-setters in Davos, and corporations wielding public power,” DeSantis said. “But fight we must.

‘We embrace our founding creed that our rights are not granted by the courtesy of the State, but are endowed by the hand of the Almighty,” he said. “We reject the idea that self-government can be subcontracted out to technocratic elites who reduce human beings to mere data points. We insist on the restoration of time-tested constitutional principles so that government of, by and for the people shall not perish from this earth.”

WATCH: Ron DeSantis declares "We will be on our guard. We will stand firm in the faith. We will be courageous. We will be strong. And we thank God, and are proud to be citizens of the great, free State of Florida." pic.twitter.com/uy0XIohcWg

That record, combined with how well it has been received in Florida (once a Republican-leaning purple state that has turned solidly red during his tenure), has made him one of two arguable frontrunners for the GOP’s 2024 presidential nomination, to the vocal frustration of the only declared candidate so far, former President Donald Trump.

DeSantis has so far not confirmed any presidential plans but is widely believed to be intending a run, as previously indicated by his refusal to commit to serving the entirety of his second gubernatorial term and his announcement of a book touting his policies as a “battle-tested blueprint for America’s revival.”