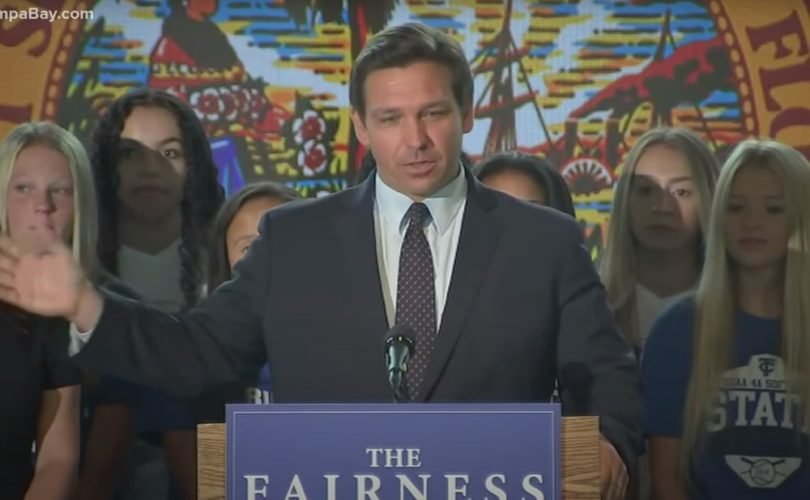 DeSantis signed into law this week the Fairness in Women’s Sports Act, which excludes biological males who claim transgender status from competing with the opposite sex in sex-specific athletic programs. The law is meant to protect female high-school and college athletes from having competitive and scholarship opportunities undermined by male students who claim to be “transgender women.”

“As these bills were going through various legislatures, I remember the NCAA put out a statement saying any state that enacts this, we’re not going to hold events there. And so I called the Speaker of the House in Florida and I said, ‘Did you hear what they said?’ And he’s like, ‘Yeah.’ I said, ‘We definitely got to get this done,’” DeSantis recounted to Carlson. “You can’t be cowed by these organizations, or particularly by woke corporations, from doing the right thing.”

“And so my view was throughout this whole time, we have to protect our girls, it is discriminatory to force them to compete against biological males,” he continued. “And so if the price of having a tournament is that I have to deny equal opportunity to hundreds of thousands of young girl and women athletes throughout Florida, I am much more willing to stand with the girls. And to hell with these events.”

The governor added that he does not expect Florida to be punished for defying outside pressure, because “we just made it clear. We’re standing with our folks, we’re gonna do the right thing. And so if corporations want to come in and try to bully us around, they are going to go nowhere. It’s going to be like hitting their head against a brick wall.”

LGBT activists claim it’s “discriminatory” to reserve female competitive sports for actual females, but scientific research affirms that testosterone suppression does not eliminate all the physical advantages that come with male physiology.

Such laws are now on the books in eight states. In thanking DeSantis for signing the Fairness in Women’s Sports Act, American Principles Project president Terry Schilling noted that the more states come on board, the less power the NCAA’s threats have: “While economic boycott threats might have worked against a single state, the strength of many state leaders standing together to defend women’s sports is certain to neutralize the left’s favorite playbook.”

DeSantis’s approach contrasts sharply with that of South Dakota Republican Gov. Kristi Noem, who in March declared she was “excited” to sign a similar bill, but following a barrage of media and corporate pressure, Noem reversed herself at the last minute, announcing she was sending the bill back to the legislature over sudden reservations about its “vague and overly broad language,” and suggesting various “style and form” changes that would have effectively gutted the bill.

DeSantis reiterated the importance of standing up and representing conservatives in an interview with The Federalist published Wednesday. “You can have a successful economy, but if the underpinnings of the culture are being torn apart, I don’t think that’s a society that will be very successful over the long term,” he said.

“I don’t think there’s ever been as many hostile cultural forces, whether it’s corporate media, universities, big tech, now big business,” he argued. “If you’re an American who believes in the core values of this country — faith, family, opportunity — you are absolutely on the defensive in many respects, so the question is, how do you fight back effectively.”

“If you lead and particularly if you’re willing to take some arrows along the way, there are voters that will do whatever they can to make sure they have your back,” the governor noted. “Stop trying to grovel in front of [corporate media outlets], stop thinking that they’re going to like you.”

The sports law is only the latest in a string of actions DeSantis has taken that have pleased conservatives, such as banning left-wing critical race theory from public schools, forbidding “vaccine passports” that would coerce Floridians into taking a COVID-19 vaccine against their will, pardoning residents who violate local COVID-19 restrictions, increasing penalties for rioting, limiting social media giants’ power to deplatform their political enemies, and signing an election law that strengthens signature verification for mail ballots and bans ballot harvesting. This record has made DeSantis a top contender for the GOP’s 2024 presidential nomination in the minds of many conservatives.