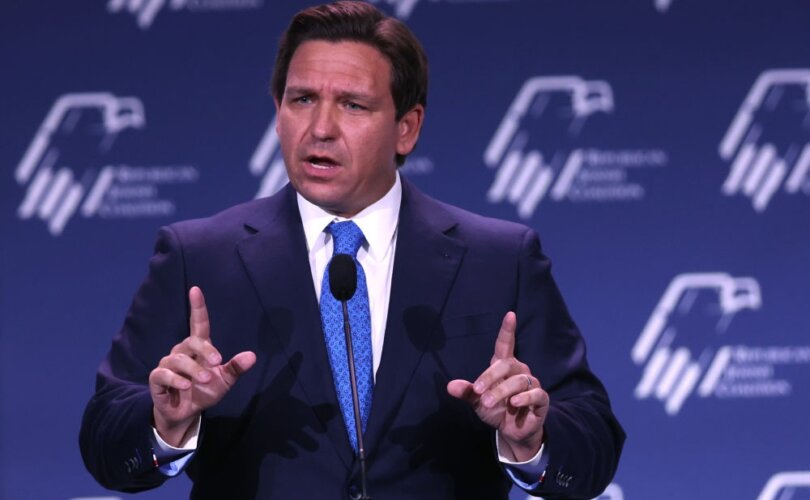 TALLAHASSEE, Florida (LifeSiteNews) — Florida Republican Gov. Ron DeSantis is once again drawing the ire of the left, this time for rejecting a pilot version of a race-based AP high school course that reportedly includes a section on “black queer studies” and other concerning topics. DeSantis’ administration says the content violates Florida’s laws against the promotion of divisive “woke” ideology in the classroom.

The curriculum offering in question, an AP African-American Studies pilot course, was launched by The College Board, which also offers SAT test and the Advanced Placement program, and is currently being tested by roughly 60 schools, the National Review reported.

It takes guts to say no to a course that looks benign on the surface but is in fact filled with CRT and leftist propaganda. Governor Ron DeSantis has guts. | Opinion by Stanley Kurtz https://t.co/St64N6v4Ww

The report added that despite ample positive press coverage, the names of those colleges and the precise content of the course have been “clothed … in secrecy.”

While it’s unclear which states are sponsoring the pilot course, it’s evident that at least one state won’t be doing so.

On January 12, Gov. DeSantis’ administration issued a letter advising The College Board that the Sunshine State would reject the nonprofit’s request that the state approve its new course.

According to National Review, the letter from the Florida Department of Education’s Office of Articulation condemned the course content as “inexplicably contrary to Florida law,” adding that it “significantly lacks educational value.”

The state’s education department didn’t close off communications, however, suggesting instead that if College Board were to “be willing to come back to the table with lawful, historically accurate content, FDOE will always be willing to reopen the discussion.”

Specifically, the Stop Wrongs to Our Kids and Employees (WOKE) Act takes aim at “identity politics” or “Critical Race Theory”-oriented curricular options by barring schools in Florida from using any coursework that promotes discrimination based on race, color, or sex, The Daily Wire noted.

Though the act was signed into law last year, it has been bound up in the courts since August after a judge temporarily blocked it, claiming it “discriminates on the basis of viewpoint in violation of the First Amendment,” LifeSiteNews previously reported.

The state’s moves to reject the race-based class have drawn outrage from the conservative leader’s leftist opponents, including California Democratic Gov. Gavin Newsom.

In a Thursday Twitter post, Newsom alleged that DeSantis’ decision to reject the course meant that he thinks “black history is irrelevant and ‘lacks educational value.’”

White House Press Secretary Karine Jean-Pierre also lobbed a similar attack against DeSantis, who she said wants to “block” the study of Black Americans, adding that Florida already “bans teachers from talking about who they are and who they love.”

DeSantis Press Secretary Bryan Griffin shot back in response to the allegations, pointing out in remarks made to Fox News Digital that the course wasn’t rejected because it would have taught students about black history but because it “lacks educational value and historical accuracy.”

Griffin pointed to several aspects of the course deemed concerning by the state, including sections on the “Reparations Movement,” “Movements for Black Lives,” and “Black Queer Studies.”

“As submitted, the course is a vehicle for a political agenda and leaves large, ambiguous gaps that can be filled with additional ideological material, which we will not allow,” Griffin said, adding that contrary to Jean-Pierre’s claims, “The study of African American history is not only permitted in Florida under Governor Ron DeSantis but required by law.”

“In fact, the teaching of African American History has been expanded in Florida since Governor Ron DeSantis took office,” the press secretary said.

Meanwhile, in addition to sparking outrage on the left, DeSantis’ moves in the cultural space have contributed to his reputation among conservatives as a Republican leader willing to combat the chief social issues.

The 44-year-old Republican governor has earned solid support from conservatives for banning coercive COVID-19 mandates, fighting radical ideology in schools and transgender treatments for minors, working to curb the spread of CCP influence in Florida, and even waging an all-out political battle against corporate juggernaut Disney over its promotion of anti-family values.

At this early date, Trump is alone in having announced his bid for the presidency in 2024. Those watching the political scene, however, anticipate that DeSantis is likely to throw his hat into the ring soon as well.

Some analysts have suggested a contest between Newsom and DeSantis could be on the horizon in 2024.