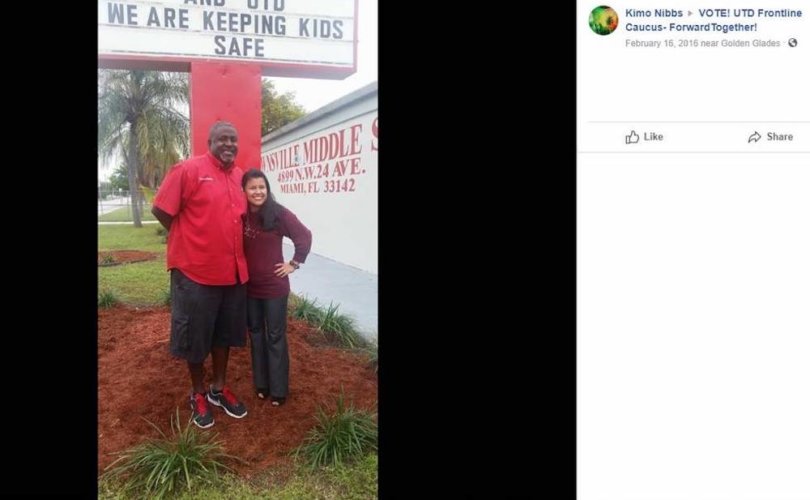 “They cared more about the power of their union than they did about the best interest of these kids. That is disgraceful,” DeSantis said at a recent press conference. “You do not put union politics ahead of middle school students who are in danger of being sexually abused … that’s disqualifying to be in any political office, much less Lieutenant Governor of Florida.”

“You do not put union politics ahead of middle school students who are in danger of being sexually abused…that’s disqualifying to be in any political office, much less Lieutenant Governor of Florida.” pic.twitter.com/5XD5b29iEc

Crist announced his selection of Hernández-Mats, former president of United Teachers of Dade County (UTD), last weekend, eliciting amazement from DeSantis supporters over the electoral judgment of selecting a teachers’ union official in the current political climate, particularly one with her record:

She wanted to close schools AGAIN in November 2020!! pic.twitter.com/EiP4u36Cbu

Charlie Crist's running mate promises a "quality education," but doesn't know how to use an apostrophe. A perfect symbol for the teachers union. pic.twitter.com/pWe4ZOASQz

But the most concerning item in Hernández-Mats’s past, which DeSantis referenced, is her union’s handling of the case of a physical education teacher and union member accused of sexually assaulting numerous female students.

As detailed by the Miami Herald in 2019, Wendell Nibbs was accused of sexual misconduct by nine girls at Brownsville Middle School over a 15-year period, ranging from inappropriate comments (including “one day you’re going to be mine” and “when are you going to let me see your p****,” both to 14-year-olds), to inappropriate touching, to forcible rape.

In January 2020, Nibbs pled guilty to three counts of sexual activity with a child, for which he was given eight years in prison and legally designated a sex offender for the rest of his life.

Nibbs was heavily involved in UTD politics and a political ally of Hernández-Mats, and it is through these relationships that it is believed top union players were made aware of and overlooked his wrongdoing.

“Nibbs was elected as a UTD building steward by his peers at Brownsville,” the Herald reported. “Several stewards said UTD leadership used Nibbs to intimidate other stewards who would question leadership at meetings.”

“He was their attack dog,” recalled Mary Milan, former steward for G. Holmes Braddock Senior High. “Any time someone opposed, the leadership stood up and said something. He was one of the loudest voices who said, ‘Shut up, you don’t know what you’re talking about.’”

“Frontline is the caucus within the union that includes the current union leadership,” the report continued. “Nibbs ran as a delegate in 2016 with the Frontline caucus. That slate, which includes the current leadership of Karla Hernandez-Mats, Antonio White and Mindy Grimes-Festge, was widely re-elected for another three years last month. Nibbs often defended the group against critics online and traveled with UTD to lobby in Tallahassee. There are multiple photos of Nibbs posing with UTD’s executive board, many of which Nibbs posted himself in Frontline’s Facebook group.”

After months of declining requests for comment, Hernández-Mats eventually released a statement disavowing Nibbs and told Colleen Wright, the author of the Miami Herald report, simply that “Hiring, firing, background checks and investigations are all handled and led by the district. If they are hired by M-DCPS, they are deemed to be qualified and safe to be in a school as far as UTD and other district employees are concerned.”

A message from our President @KarlaMats regarding Wendell Nibbs case. https://t.co/37KFO0ec6U

Defenders of the Democrat gubernatorial ticket have attempted to dismiss the scandal as “false” on the grounds that while the “known allegations against Nibbs span from May 2004 to May 2016,” she “did not become president of UTD, which represents more than 28,000 educators, until May 2016,” and that the union supposedly stays out of all investigations once they become a criminal matter.

However, as previously mentioned, both Hernández-Mats and Nibbs were active in district education politics, and before becoming president Hernández-Mats held another UTD leadership role, secretary/treasurer, from 2013 to 2016, meaning questions remain as to her level of knowledge and what ability she may have had to stop or shield Nibbs.

Regardless, Crist’s running mate selection is seen by many as a boon to DeSantis’s reelection campaign, as it offers a stark contrast to the image and record the governor has cultivated as an education reformer who fought to keep schools open and keep left-wing indoctrination out of classrooms.