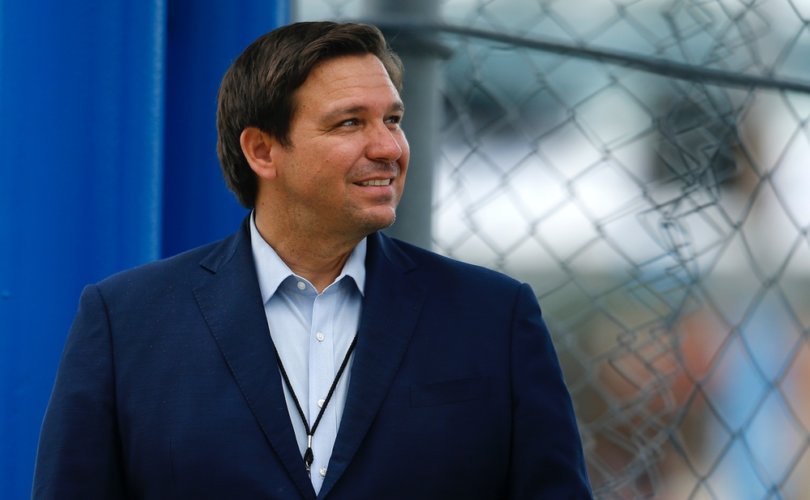 TALLAHASSEE, Florida (LifeSiteNews) – Governor DeSantis attributes many societal problems to the growing lack of active fatherhood, calling on fathers to be “interested,” “present,” and “setting a good example” for their children.

During a May 27 interview on the First Class Fatherhood podcasting show, Republican Florida Governor Ron DeSantis suggested that children are suffering from a lack of fathers in their lives, which in turn has led to many of modern society’s problems.

“If … every kid in America had a loving father in the home, we would have far, far fewer problems that we would have to deal with as a society,” DeSantis said.

The governor added: “I do think there are a lot of problems, but if you could just snap your fingers and do one thing, and you did this where the fathers were in the home, you would not even need to worry about a lot of these other problems.”

DeSantis quoted data from the U.S. Census Bureau showing over 18 million children (one in four) in America live in homes without a father. Research further shows a definite link between fatherlessness and crime.

“When my daughter was born, I was a member of congress at the time up in Washington,” he revealed. “So, I’m looking at myself, I’m sitting up in my office in D.C., wondering, ‘Why the hell am I up here? I really want to be back down.'”

DeSantis shared that he finds being governor a more “family friendly” job.

“I can go out and do stuff all day and be home for dinner,” he explained.

“Even if I get home late, I see them in the morning,” he continued. “And so, part of the reason why I ended up running for governor is because I had two young kids at home, and so if I’m going to do public service, I wanted to make sure I can do it in a way that is family friendly.”

DeSantis revealed how he builds a close relationship with his children, even bringing his son to work with him.

“We do make an effort to involve them and let them be able to see what is really a great state to live in,” he continued.

READ: DeSantis skewers critics who compare him to ‘dictator’: Florida is a ‘beachhead of freedom’

In April, DeSantis signed legislation connecting boys with mentorship programs and men with career services in the hopes of uniting children with fathers.

Kids do better when they have active fathers in their lives. Governor @RonDeSantisFL is doing everything he can to support fatherhood in Florida. pic.twitter.com/Nxev7nuzDD

The governor’s office revealed in a press release that the legislation is “tied to nearly $70 million in funding to provide a wide spectrum of family and youth support through the Department of Juvenile Justice (DJJ) and the Department of Children and Families (DCF).”

“There are more than 18 million children in our country who live without a father in their homes,” DeSantis said. “This has a severe impact on children, and often leads to dropping out of school, crime, and substance abuse. Incredibly, there are those who diminish the importance of fatherhood and the nuclear family – we will not let that happen in our state.”

Tony Dungy, the former head coach of the Tampa Bay Buccaneers called the bill “tremendous and such a good help to fathers in Florida.”