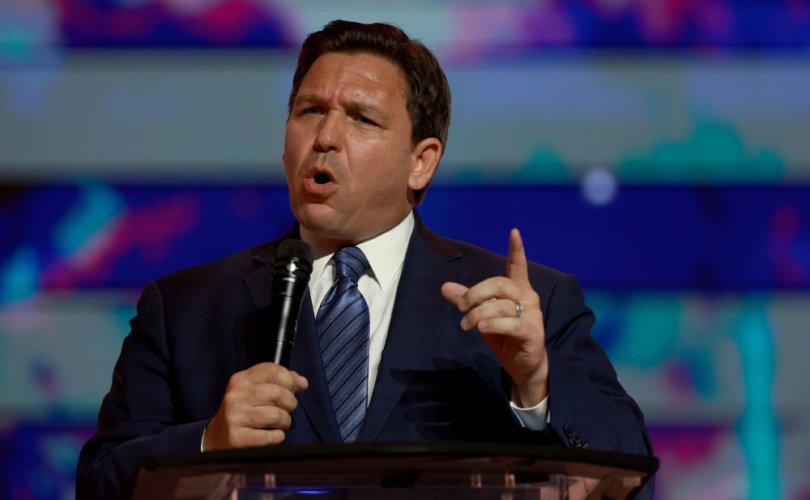 Gov. DeSantis made the comments during a September 5 interview with Catholic Fox News contributor Raymond Arroyo, in which he weighed in on Biden’s divisive September 1 speech condemning so-called “MAGA Republicans” as “threats” to the “foundations” of America.

“I thought it was one of the most disgusting speeches an American president has ever given,” DeSantis said. “He ran as being a unifier, and he’s basically saying to the vast majority of the country that disapproves of him that they’re effectively a threat to the Republic.”

.@GovRonDeSantis explains why President Biden’s speech was ‘one of the most disgusting speeches an American president has ever given’ https://t.co/Y6voAkKwU8

“He dodders, he lashes out, but at the end of the day, his policies are why there’s so much opposition to him,” the Florida governor continued.

Noting that Biden has allowed nearly unfettered illegal immigration under his watch, “kneecapped” the U.S. economy, and artificially inflated the currency, DeSantis said it’s no wonder “people are going to be upset at all the wreckage he’s left in his wake.”

“He is the American Nero,” he said, characterizing Biden as “a failed leader” and arguing the president’s divisive speech last week was a calculated political ploy to “energize his base” in a bid to stave off major political fallout in the upcoming November midterms.

DeSantis, who many see as a strong candidate for the U.S. presidency in 2024, is among a bevy of conservatives who have slammed Biden for his aggressive and highly controversial speech last week.

RELATED: DeSantis urges voters to ‘put on the full armor of God,’ keep Florida as the ‘vanguard of freedom’

Biden gave the speech Thursday night in front of Independence Hall in Philadelphia, where America’s founding documents were signed. Against an ominous blood-red backdrop flanked by two U.S. Marines, Biden railed against former U.S. President Donald Trump and his supporters, arguing they “represent an extremism that threatens the very foundations of our Republic.”

According to Biden, whose FBI last month carried out an unprecedented raid of Trump’s Mar-a-Lago home, “MAGA Republicans do not respect the Constitution. They do not believe in the rule of law. They do not recognize the will of the people.”

Biden added that in his view, Trump-supporting Republicans “fan the flames of political violence that are a threat to our personal rights, to the pursuit of justice, to the rule of law, to the very soul of this country.”

Critics of the president have raised the alarm about the administration’s increasingly militaristic rhetorical posture with regard to conservative Christian Americans.