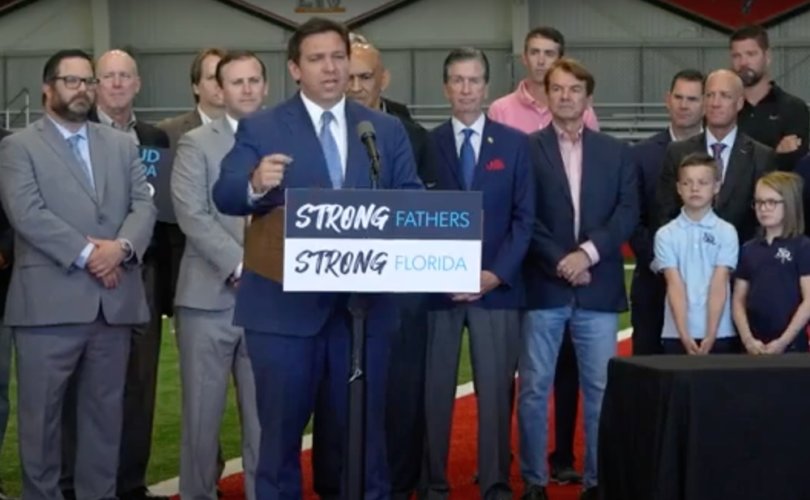 “Today’s $70 million investment will fund programs to support fathers and help families stay connected and engaged with each other,” DeSantis, the father of three young children, said in a Monday tweet highlighting the new measure.

“Our state, communities and families are better when fathers are involved,” he added.

Today’s $70 million investment will fund programs to support fathers and help families stay connected and engaged with each other.

Our state, communities and families are better when fathers are involved. pic.twitter.com/r6U7DPmNSJ

CBS Miami reported that the measure, HB 7065, had earned bipartisan support and passed unanimously in the House and Senate before reaching the governor’s desk for a signature.

According to a Monday press release put out by the Florida governor’s office, the bill will allot the nearly $70 million for “educational programs, mentorship programs, and one-on-one support to encourage responsible and involved fatherhood in Florida.”

Among the primary provisions of the new legislation is the support and creation of mentorship programs at the DJJ for Florida youth considered at-risk.

“For many of these youth, their mentor may be the closest thing they have to a father,” the press release stated. “DJJ also hosts and supports programs for involved fatherhood, including barbershop talks and fatherhood classes.”

Additionally, the DCF will launch “a statewide awareness campaign to call attention to the importance of responsible fatherhood, and to equip fathers with resources to stay engaged in their children’s lives.”

CBS Miami noted the so-called “Responsible Fatherhood Initiative” will be “geared toward providing information on effective parenting and will include a media campaign that ‘may include appearances by and involvement from public figures and influencers.’”

Supporters of the the bill included fathers from throughout Florida along with “several national and community leaders who encourage involved fatherhood,” the press release noted, “including former NFL head coach Tony Dungy, former NFL professional football player and philanthropist Jack Brewer, and Glen Gilzean, president and CEO of the Urban League of Central Florida.”

The Florida DCF has also been directed to support nonprofit organizations within the state that “help fathers stay engaged and connect with their children,” and will also “support case managers who will help fathers find employment, transition from incarceration and manage their obligations.”

The Monday press release cited a U.S. Census Bureau finding that over 18 million children in the U.S., or approximately 25% of all American kids, do not have a father in the home.

DeSantis said in a statement that the high rates of fatherlessness in American households “has a severe impact on children, and often leads to dropping out of school, crime and substance abuse.”

Many studies have found that children from fatherless homes are far more likely to experience poverty, abuse drugs and alcohol, drop out of school, and commit crimes. Meanwhile, the pro-abortion Guttmacher Institute has noted that the “overwhelming majority” of women who get abortions (85%) are not married to the fathers of their babies.

“Incredibly, there are those who diminish the importance of fatherhood and the nuclear family – we will not let that happen in our state,” DeSantis said. “I am proud to say we are doing everything we can to support involved fatherhood in Florida.”

In Florida, we are working hard to promote and support fatherhood.

Children that grow up without a father in the home are more likely to drop out of school and get in trouble with the law. pic.twitter.com/eVGLMfP9If

Florida Republican House Speaker Chris Sprowls, who had highlighted the fatherhood crisis in his 2019 designation speech, said in a statement that “[w]e cannot legislate fatherhood, accountability or character, but we can provide supports for fathers to equip and encourage them to take an active role in the lives of their children.”

“By addressing the root cause of so many of the challenges facing our sons and daughters, we will see the positive impact of this legislation send shockwaves for generations to come,” Sprowls said.

During a Monday press conference in Tampa, DeSantis argued that “[i]f you look over the last many decades, one of the worst social trends has been the decline of fatherhood.”

“And we do have, in many instances, a fatherhood crisis in this country,” he said.

“We’re putting our money where our mouth is,” the Florida governor said. “We’re here showing the importance of this. But you’ve got to be willing to do the right thing and be present in your child’s life. You’re not a man by leaving your kids hung out to dry. You need to be there.”

DeSantis isn’t the only prominent Republican in recent months to highlight the necessity for American men to step up.

LifeSiteNews reported that late last year, Republican Sen. Josh Hawley of Missouri took the stage at the National Conservatism Conference to rally men to fight for traditional American values against the predations of a political left intent upon the “deconstruction” of authentic liberty.

“We need men who will shoulder responsibility, men who will start and provide for families, men who will enter the covenant of marriage and then honor it,” the 41-year-old Christian husband and father said.

The Missouri Republican said that communities “begin with the family,” noting that “we must make the family the center of political life.”

“We should be clear in the message we send about family and unapologetic: There is no higher calling, and no greater duty, than raising a family,” Hawley said.