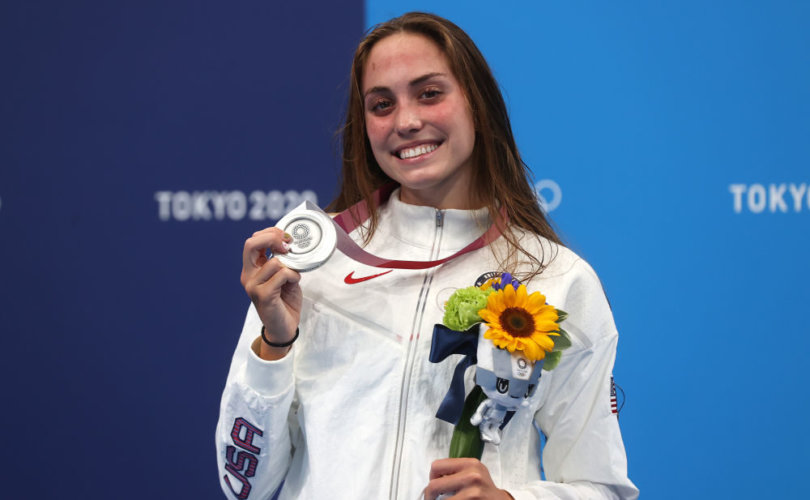 The news comes after the National Collegiate Athletic Association (NCAA) declared University of Pennsylvania fifth-year student “Lia” Thomas the winner of the Division 1 Women’s 500 Yard Freestyle held March 17. Thomas, a man who identifies as a woman, has shattered records and generated national controversy since he began competing on the women’s team after swimming for three seasons on the men’s team.

University of Virginia student Emma Weyant took second place in Thursday’s NCAA competition, finishing 1.75 seconds behind her “transgender” competitor. Weyant is a 20-year-old Olympic silver medalist and native of Florida who swam for the Sarasota Sharks before joining the University of Virginia’s women’s swim team.

In his Tuesday proclamation, DeSantis declared that Weyant, not Thomas, was the true winner of the Women’s Freestyle competition, stating that “Florida rejects the NCAA’s efforts to destroy women’s athletics, disapproves of the NCAA elevating ideology over biology, and takes offense at the NCAA trying to make others complicit in a lie.”

“[S]ince she is a native Floridian from Sarasota, I Ron DeSantis, Governor of the State of Florida, do hereby declare in Florida that Emma Weyant is the rightful winner of the 2022 NCAA Division 1 Women’s 500 Yard Freestyle, congratulate her on yet another significant achievement, and express pride that she is a Florida resident,” DeSantis wrote.

By allowing men to compete in women’s sports, the NCAA is destroying opportunities for women, making a mockery of its championships, and perpetuating a fraud.

In Florida, we reject these lies and recognize Sarasota’s Emma Weyant as the best women’s swimmer in the 500y freestyle. pic.twitter.com/tBmFxFE3q6

The governor had promised to sign a proclamation affirming Weyant’s victory earlier in the day.

During a Tuesday press conference, DeSantis, who has frequently waded into national politics and grabbed headlines for taking action against critical race theory and radical gender ideology in schools, told reporters that “Emma [Weyant] is the best female swimmer in the 500 meter freestyle.”

Arguing that the NCAA has allowed “men to compete in women’s athletics,” DeSantis said that Weyant was “the number one woman who finished.”

“[S]he won the silver medal, she’s been an absolute superstar her whole career,” he said.

The Sunshine State’s governor, who many conservatives see as a strong contender for the presidency in 2024, went on to assert that “we need to stop allowing organizations like the NCAA to perpetuate frauds on the public and that’s exactly what they’re doing.”

DeSantis hasn’t been the only one to speak out against Thomas’ involvement in women’s sports.

In an interview this week, a University of Pennsylvania female swimmer told Fox News Digital on condition of anonymity that she didn’t think Thomas’ participation on the team was legitimate because “women’s records are separate from men’s records.”

“It’s not necessarily an achievement in my mind,” the anonymous student said. “Women’s records are separate from men’s records. It’s its own distinct category because no woman is going to be as fast as a man.”

“[W]e’re just throwing away the definition of a record to fit into someone else’s agenda of what it should mean to them when, in reality, it makes no scientific sense to do so,” she added.

Sportsmanship is a virtue bred by fair competition. These women are being robbed of the beauty of sports, the ability to lose w/ grace & to honor the winner who triumphed over peers through pure talent & hard work. We must stand up before this becomes the norm. #SaveWomensSports pic.twitter.com/CN8yTufad5

Similarly, in a letter to the NCAA on Sunday, Virginia Tech swimmer Reka Gyorgy said she lost her chance to compete in the final to Thomas, and slammed the association for its “lack of interest in protecting their athletes.”

“Every event that transgender athlete competed in was one spot taken away from biological females throughout the meet,” said Gyorgy, who said she “respect[s] and fully stand[s] with Lia Thomas,” but hopes “the NCAA will open their eyes and change these rules” allowing men who identify as women to compete against females.

Meanwhile, prior to the release of Gyorgy’s statement, a group of parents of Ivy League swimmers wrote an anonymous New York Post op-ed in which they argued Thomas and other male athletes who identify as women have “robbed thousands of women of fair treatment in sport.”

This isn’t the first time DeSantis has taken action to combat transgender ideology in sports.

Last year, DeSantis signed the Fairness in Women’s Sports Act into law, prohibiting men who identify as women from participating in women’s sports. Under the law, anyone whose birth certificate states he is male may not compete against females in sports from middle school through college.

“We thought it was very important that girls and young women athletes in the state of Florida had the ability to work hard, to realize their dreams and to compete fairly,” DeSantis said Tuesday. “Whether it’s in swimming, it’s in track and field, you name it.”

At least 37 states have at least introduced measures restricting men from competing in women’s sports, 11 of which have passed the proposed bans into law.

Idaho’s Republican Gov. Brad Little was the first state governor to ban men from competing in women’s sports, doing so by signing HB 500 in March 2020.