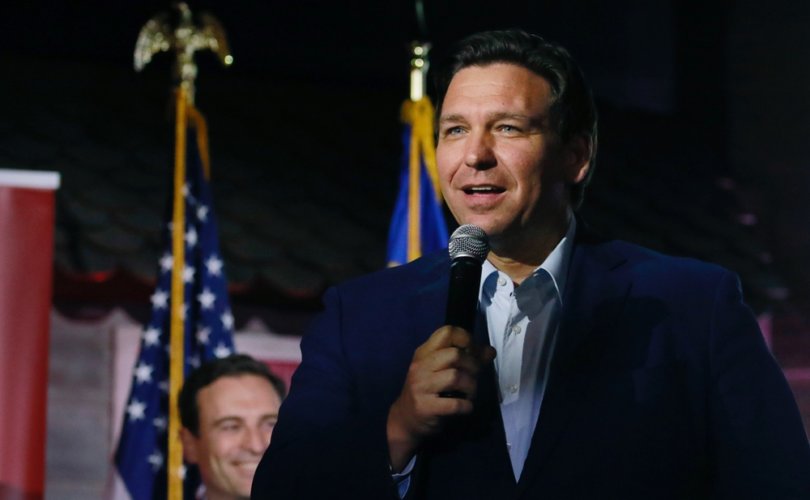 MIAMI, Florida (LifeSiteNews) — Pro-freedom Florida Governor Ron DeSantis, whose state has become a refuge for Americans fleeing draconian COVID lockdowns and mandates, slammed comparisons of himself to a totalitarian dictator as a “slap in the face” to Floridians who have lived under actual authoritarian regimes, such as Cuban immigrants.

When asked during a Tuesday press conference in Miami what he thought about people “equating” him to “an authoritarian dictator, like Castro or even Maduro,” DeSantis replied, “I think it’s a slap in the face to everybody in South Florida that has experience with these Marxist dictators in our hemisphere.”

“You have people who were driven out of the island of Cuba, …where it was so bad, the oppression there, that they would get on a raft and go 90 miles over shark-infested waters to be able to get to freedom,” DeSantis continued.

Miami-Dade County, the most heavily populated county in Florida, is dominated by first- and second-generation Cubans. As of 2017, about one in four Miami-Dade residents were born in Cuba, and almost 49 percent of its foreign-born population was Cuban-born.

Immigrants to Miami-Dade from Venezuela, now ruled by dictator Nicolás Maduro, have also sharply increased over the past decade, with a population of about 61,000 in Miami-Dade County as of 2017.

DeSantis pointed out that people who have lived under the authoritarian regimes of Cuba and Venezuela have had their “entire livelihoods” and “entire liberty” taken from them, driving them to flee to Florida.

He went on to accuse some Democrat politicians for having a “soft spot for dictatorships like in Cuba,” and for “people like Maduro and Ortega.” DeSantis declared his “contempt” for such values.

DeSantis acclaimed Florida, by contrast, for being seen not only in the U.S., “but even around the world, as a beachhead of freedom.”

Indeed, Florida has been hailed around the world particularly since the onset of the COVID-19 for being one of the freest places in the globe, as many other locales have buckled under harsh COVID restrictions.

DeSantis has resisted such trends by, for example, working aggressively to ensure students are able to breathe freely in schools, to ban vaccine passports so that all have equal access to businesses, and to keep businesses themselves open, thereby keeping the local economy afloat.

During the peak of COVID, DeSantis issued a 30-day stay-at-home order more lenient than most, with exceptions made for religious services and recreational activities, and broadly defined essential businesses. Afterward, Florida’s economy was reported as growing at a rate three times greater than the national average in September 2021.

Some Democrats have criticized DeSantis for protecting the lives of unborn children through a 15-week abortion ban, viewing it as a constraint on women’s “freedom” to kill their babies; or for his recent action to protect Florida residents by prohibiting demonstrations outside their homes.

During the Miami press conference, DeSantis said that “to equate” Florida with the regimes of Cuba and Venezuela “just shows that you have no idea what you’re talking about…I think that it really does a disservice to the oppression that so many people in Southern Florida have faced either firsthand or through members of their family.”

DeSantis went on to highlight the migration into Florida from other states, as well as other countries whose governments have become increasingly heavy-handed since the COVID-19 pandemic, such as Canada.

Florida Governor Ron DeSantis notes that people are fleeing from Canada to the Sunshine State to enjoy the freedom there.pic.twitter.com/IZYC60RGgl

Canada is among the countries that have been particularly heavy-handed with restrictions on everyday activities, including travel, under the pretext COVID-19, prompting writers for the Epoch Times to describe Canada as the “world’s largest prison” and Prime Minister Justin Trudeau as “the world’s foremost jailer,” with other writers describing Trudeau as a “dictator.”

Patricia Adams and Lawrence Solomon noted that “partially” vaccinated and unvaccinated Canadians are still prevented from leaving the country by plane or boat, adding that “Apart from police states such as North Korea and Cuba, no country on earth confines its own citizens under this form of house arrest.”