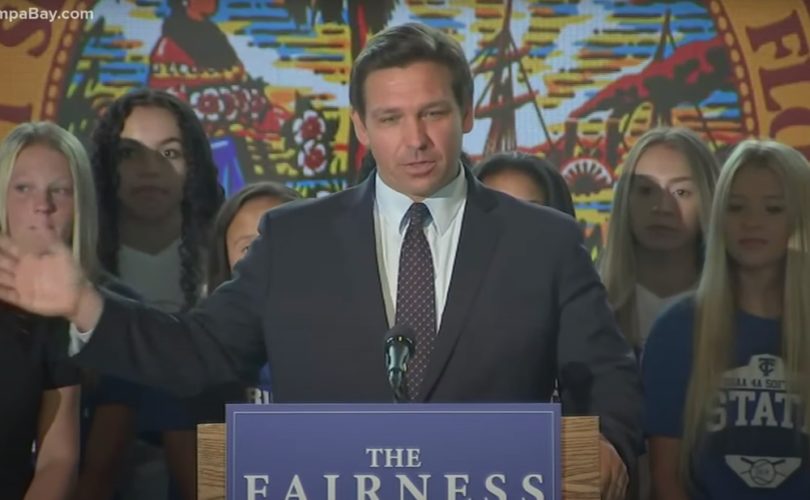 UPDATE, Nov. 30,  2022, 5:17PM CST: This report has been updated with additional comments from Musk clarifying the latest on Twitter’s relationship with Apple.

The advertising agency representing Apple and other major corporations recently recommended “pausing” advertising on Twitter over the pro-free-speech stance of new owner Elon Musk, who said Monday that the company has since “mostly stopped advertising on Twitter” and “has also threatened to withhold Twitter from its AppStore, but won’t tell us why.”

On Wednesday evening, Musk said he met with Apple CEO Tim Cook and “resolved the misunderstanding about Twitter potentially being removed from the App Store. Tim was clear that Apple never considered doing so.”

Commenting on the matter during a press conference (prior to Musk’s update), DeSantis said that carrying out the threat “would be a huge, huge mistake” on Apple’s part, as well as a “really raw exercise of monopolistic power that I think would merit a response from the United States Congress. Don’t be a vassal of the [Chinese Communist Party] on one hand and then use your corporate power in the United States on the other to suffocate Americans and try to suppress their right to express themselves.”

"That would be a huge, huge mistake, and it would be a really raw exercise of monopolistic power that I think would merit a response from the United States Congress." pic.twitter.com/VNjG6GuBcd

The governor was referencing the recent news that Apple limited the AirDrop content sharing function only on iPhones in mainland China, shortly ahead of protests against the Communist regime. AirDrop was an asset used to great effect by dissidents in past protests to spread information beyond the control of government censors.

That change “is obviously providing aid and comfort to the CCP,” DeSantis said. “This zero-COVID policy is draconian, it violates people’s liberties, and it is completely unscientific. And the people of China are right to be able to speak out and protest against what the Chinese Communist Party is doing […] We need these draconian COVID policies to go to the ash heap of history where they belong.”

Other Republicans have spoken out against Apple, as well:

Apple is fully in bed with Communist China. https://t.co/OHpGAFA7ib

I’d like to know why ⁦@Apple⁩ continues to aid and abet the totalitarian regime in #China while campaigning against free speech at home. My letter to Tim Cook 👇 pic.twitter.com/TrnQcBmz4i

DeSantis’ latest comments come as support builds among Republicans for nominating him for president in 2024, building off his record of proactively pursuing conservative agenda items and his landslide reelection to the Florida governorship. This week, DeSantis also announced a new book to be released next year, touting his policies as a “battle-tested blueprint for America’s revival,” which has been taken as a sign of his national ambitions.

In the meantime, Musk has said that if Twitter follows through on its alleged threats, he would make an alternative smartphone.