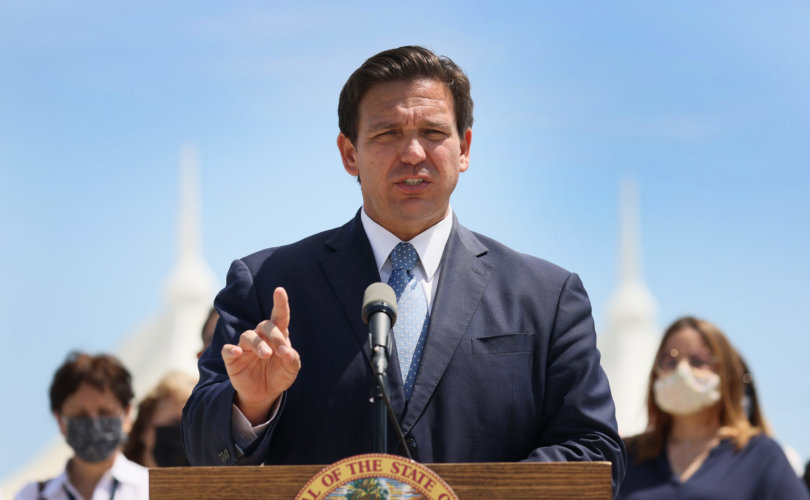 “We are going to stand for the men and women who are serving us,” DeSantis said at a news conference in Alachua County. “We are going to protect Florida jobs. We are not going to let people be fired because of a vaccine mandate.”

The Republican governor took aim at cities and counties requiring employees to get vaccinated, saying that his administration would move to punish violations of Florida’s ban on COVID-19 vaccine mandates with potentially “millions of dollars” in fines.

“If a government agency in the state of Florida forces a vaccine as a condition to employment, that violates Florida law, and you will face a $5,000 fine for every single violation,” DeSantis said. “If you look at places here in Alachua County, like the city of Gainesville, I mean, that’s millions and millions of dollars potentially in fines.”

“We will certainly move to impose the fines as the law requires when we see people that are denied access,” he stressed.

In May, Florida enacted S.B. 2006, which bans government entities from requiring proof of COVID vaccination for employment or for access to services. The law also allows the governor to invalidate local emergency orders and prohibits businesses from asking patrons to provide proof of vaccination, though it does not ban vaccine mandates for private sector employees.

S.B. 2006 allows up to $5,000 in fines per violation for any business, school, or public entity that demands documentation of COVID-19 status.

The governments of Orange County, Leon County, and the city of Gainesville have nevertheless moved forward with strict vaccine mandates for employees, in defiance of S.B. 2006, according to the Tampa Bay Times. Those local governments said Monday that they will still continue to require vaccination, despite lawsuits brought by hundreds of workers.

Orange County Mayor Jerry Demings (D) acknowledged that fines due to the mandates would likely amount to “a lot of money.”

At his news conference on Monday, DeSantis again slammed the COVID vaccination requirements announced last week by Joe Biden, which mandate the jab with no testing option for all federal employees, federal contractors, and healthcare workers at facilities that receive Medicare or Medicaid funding.

Biden’s mandates extend to around 80 million private employees as well, through an anticipated rule from the Department of Labor that will require employers with more than 100 workers to make their workforce either take the vaccine or undergo weekly coronavirus testing. Refusal to comply could cost companies nearly $14,000 for each violation.

“This is not constitutional,” DeSantis said about the mandate for private employers. “Everyone in his administration for 9 months said they don’t have the ability to do this, that [the vaccines] shouldn’t be mandated.”

“I don’t think postal should be forced, don’t get me wrong,” DeSantis said, “but Biden thinks everyone should be forced except, you deliver mail, somehow that’s fine. But, if you’re somebody – a nurse – who’s been working in the ICU for a private hospital for a year and a half treating COVID patients and likely has already had COVID, then somehow you’re going to get fired unless you follow the mandate.”

“How does that make sense at all? It doesn’t. This is all political,” he said.

Vaccine mandates also ignore the science on natural immunity, DeSantis added, pointing to studies, like from one Israel showing that post-infection immunity confers far greater protection against COVID-19 than the vaccines.

“Every single credible study always shows that [natural immunity] provides good protection, and so that’s just the reality,” the governor said. “I don’t support mandates at all, but if you’re doing mandates based off this, if you’re really following science, you would acknowledge this natural immunity, and instead, they ignore it.”

“It’s really about using government power control to mandate much more than it is about the underlying medical issues that are involved, and I think that is the perfect example of why.”

Gov. DeSantis vowed Monday that Florida is “fighting back against the Biden mandate.” “We’re working through different things that we’re going to be doing in the state of Florida but suffice it to say nobody should lose their job over this issue,” he said. “I think the fight with the Biden mandate is a real serious fight to defend the constitutional system.”

DeSantis did not provide any further details on how the state will fight the federal vaccine mandates. Florida Attorney General Ashley Moody said Thursday that she plans to use “any and all action within the authority of my office to stop this unprecedented power grab.”

Nearly all Republican governors and attorneys general from across more than two dozen states have condemned the Biden administration’s new mandates and have threatened legal challenges against them. The vaccine rules have already sparked large-scale protests, including in Idaho, where Joe Biden visited on Monday.