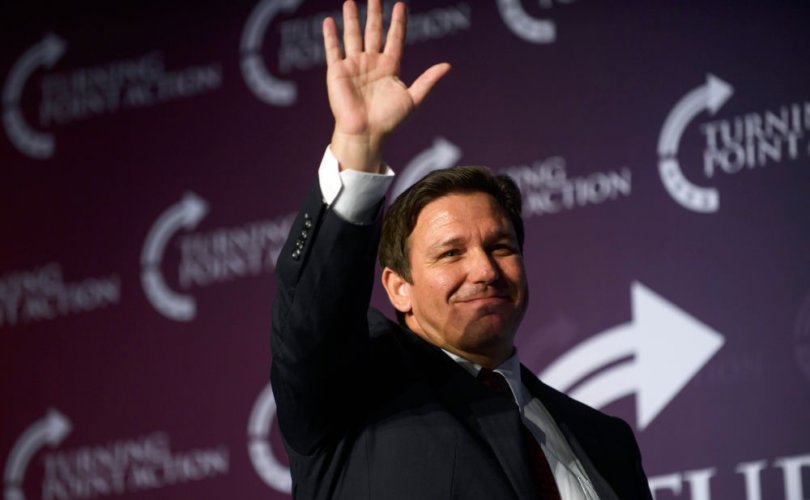 Florida Gov. Ron DeSantis speaks at the Unite and Win Rally in support of Pennsylvania Republican gubernatorial candidate Doug Mastriano at the Wyndham Hotel on August 19, 2022 in Pittsburgh, Pennsylvania.Photo by Jeff Swensen/Getty Images

Gov. DeSantis made the announcement in a September 22 tweet in which he explicitly named the CCP as a foreign adversary.

“Today, I took action to protect Floridians from the bad intentions of adversaries abroad, such as the Chinese Communist Party,” he wrote.

“This Legislative Session, I am proposing additional protections for our homeland against threats arrayed by those who seek our nation’s downfall,” DeSantis said.

Today, I took action to protect Floridians from the bad intentions of adversaries abroad, such as the Chinese Communist Party.

This Legislative Session, I am proposing additional protections for our homeland against threats arrayed by those who seek our nation’s downfall. pic.twitter.com/2yVxf33fL6

In addition to prohibiting the Chinese government and other foreign actors from buying up agricultural land and property near military bases, DeSantis will urge congressmen to draft legislation protecting Floridians’ personal data from being captured by foreign-based tech companies.

The governor also wants lawmakers to bar universities from receiving gifts from China-affiliated entities or individuals, a concern that has grown after the Chinese government began exerting ideological influence on American schools through university “Confucius Institutes.”

In addition to handing down legislative proposals, DeSantis’ announcement also highlighted action he has already taken to halt the spread of Chinese Communist influence in the Sunshine State.

On Thursday, DeSantis issued an executive order banning state and local government entities from acquiring technology products and services from any “companies owned by, controlled by, or located in China or other foreign countries of concern.”

“From server farms to farmland, the Communist Party of China has been worming its way into our nation’s data storage systems and buying up tracts of land near sensitive national security sites,” DeSantis said in a press release.

“By prohibiting the purchase of lands, state contracts with Chinese technology firms, and the infiltration of CCP-affiliated groups such as Confucius Institutes, Florida is leading the way to protect our nation from international foes,” he said.

DeSantis’ legislative actions come as Chinese investors, including those from Taiwan and Hong Kong, have become the largest group of foreign buyers to purchase land in the United States over the past decade, spending more than $188 billion in American land and property acquisitions since 2013.

This summer, the China-based Fufeng Group drew national attention after proposing a $700 million deal to purchase land in North Dakota for an agribusiness facility, The South China Morning Post reported.

Last month, Republican Sen. Mike Rounds of nearby South Dakota responded by introducing the “Promoting Agriculture Safeguards and Security Act of 2022,” which would “blacklist China” from continuing to buy up American farmland or agricultural companies.

Protecting American farmland is critical to maintaining national security. I’ve introduced a bill that would prevent China, Russia, North Korea and Iran from buying farmland and ag businesses in the US.

“Protecting American farmland is critical to maintaining our national security,” Rounds said in an August 17 press release. “As a member of the Senate Armed Services Committee, I was alarmed when a Chinese company recently purchased farmland near an Air Force base in North Dakota.”

According to Rounds, the land purchase “could threaten our national security by allowing the Chinese Communist Party to closely monitor the operations and communications at a very important military facility.”

In addition to China, Rounds’ legislation would prevent fellow bad actors Iran, North Korea, and Russia “from investing in, purchasing or otherwise acquiring land or businesses involved in agriculture.”