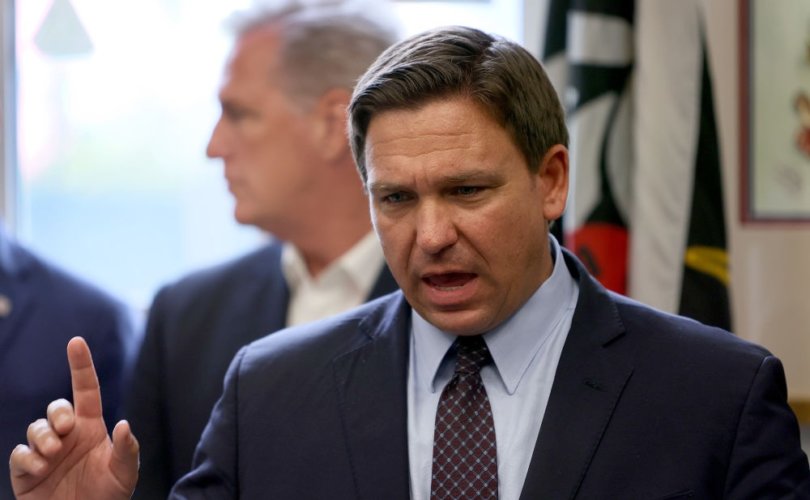 Second Judicial Circuit Court Judge John Cooper on Thursday issued a statewide temporary injunction against House Bill 5, or the “Mortality Reduction Act,” which outlaws the killing of most unborn babies determined to have been conceived at least 15 weeks prior.

During the April signing ceremony, Gov. DeSantis had said “we are here today to defend those who can’t defend themselves,” adding that the legislation “will represent the most significant protections for life enacted in this state for a generation.”

After having taken effect July 1, the measure will be temporarily stalled as soon as Judge Cooper signs a written order siding with the abortionists who filed suit to block the legislation, CNN reported.

“The order still needs to be drafted, and the state will have a chance to review it before Judge Cooper officially signs it,” Fox 10 reported.

Cooper is expected to sign the order Tuesday, July 5, after the pro-life law takes effect over the holiday weekend.

This, of course, will almost certainly be appealed all the way up to FL Supreme Court.

Thursday’s decision to block the law is not related to the U.S. Supreme Court’s decision last week to overturn Roe v. Wade (1973) and Planned Parenthood v. Casey (1992), which returned authority to regulate abortion back to the states, The Post Millennial pointed out.

Instead, the Florida judge’s action against the pro-life law stems from the assertion that the legislation violates the state constitution, not the federal constitution.

CNN noted that that Florida’s state constitution contains a right to privacy, which the Florida Supreme Court has interpreted to include a right to abortion.

In his verbal ruling Thursday, Cooper backed up the prior constitutional interpretations, arguing that Florida’s pro-life law “violates the privacy provision of the Florida Constitution.”

“The Florida Supreme Court has determined Florida’s privacy’s provision is clearly implicated in a woman’s decision in whether or not to continue her pregnancy,” Cooper said.

Gov. DeSantis has promised to fight the judge’s decision.

The popular Republican governor has generated widespread support among conservatives for his hard-line conservative policies fighting liberty-crushing COVID-19 measures, limiting abortion, working to uproot radical ideologies from the classroom, and opposing the radical transgender chemical and genital mutilation of children.

RELATED: Elon Musk says he favors DeSantis for president in 2024

On Thursday, anticipating the circuit judge’s decision to stall the pro-life law, DeSantis pointed out that 15-week-old unborn babies have a heartbeat, “can feel pain, they can suck their thumb.”

“To say that the state constitution mandates things like dismemberment abortions, I just don’t think that’s the proper interpretation,” he said. “And so, we’ll appeal.”

“These are unborn babies that have heartbeat, they can feel pain, they can suck their thumb, and to say that the state constitution mandates things like dismemberment abortions… we’ll appeal.” pic.twitter.com/vJ59ONZOjK

While DeSantis promised to fight the ruling, Nikki Fried, Florida Agricultural Commissioner and one of DeSantis’ Democratic gubernatorial challengers in the upcoming November election, hailed the court’s decision in a June 30 tweet.

“The 15-week abortion ban was just ruled unconstitutional in Florida. Because it is,” Fried wrote. “We won’t go back. We will keep fighting.”

Responding to Fried, DeSantis spokeswoman Christina Pushaw noted that “15 weeks is almost 4 months. Abortion isn’t allowed that late in other developed countries. Why cheer for this?”

15 weeks is almost 4 months. Abortion isn’t allowed that late in other developed countries. Why cheer for this?

In a separate tweet, Pushaw also affirmed that the state plans to appeal Judge Cooper’s ruling to the Florida Supreme Court.

Analysts anticipate that DeSantis is well-poised to score a victory by appealing the injunction against the 15-week abortion ban to the state Supreme Court. DeSantis has appointed six of the Florida Supreme Court’s seven justices.

Thanks to the U.S. Supreme Court’s June 24 decision in Dobbs v. Jackson to return abortion regulation to the states, battles over abortion restrictions or permissions are likely to ramp up in local legislatures and state courts across the country.