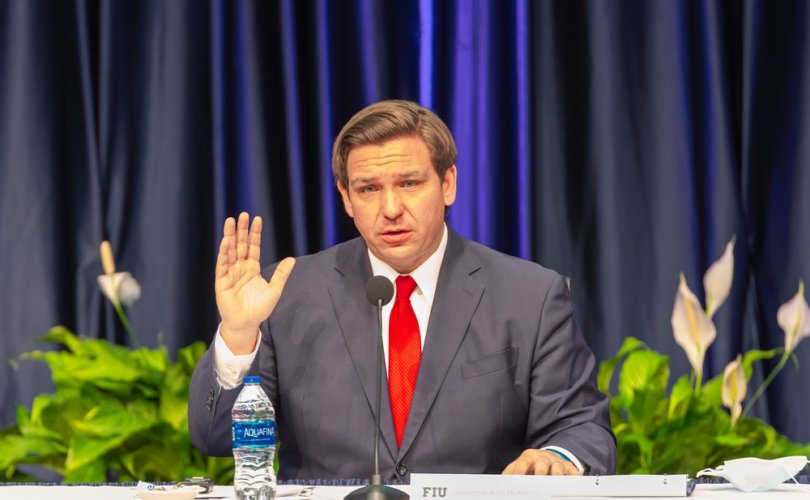 May 14, 2021 (LifeSiteNews) – Florida Governor and potential Republican presidential candidate Ron DeSantis took yet another stand against those using COVID-19 as a basis for restricting personal freedom Wednesday, announcing he will pardon any Floridian charged by localities attempting to enforce restrictions he had already rescinded.

At issue are the fates of Mike and Jillian Carnevale, former owners of the Broward County gym Fitness 1440. The Blaze reported that they have been arrested multiple times for violating local mask mandates and social-distancing requirements, despite DeSantis ending most COVID-19 restrictions in September and specifically allowing gyms to open at full capacity with a ban on new local restrictions on businesses.

The couple says they “filed a lawsuit against the county's mandate that citizens wear masks during strenuous exercise and were arrested 24 hours later,” The Blaze reported. “They said they were arrested a total of three times, had their business seized, and now face up to 180 days in prison after they turned down a plea deal for 10 days in jail.”

“This is exactly what we ordered against last summer,” DeSantis said Wednesday evening during an appearance with the Carnevales on Laura Ingraham’s Fox News show. “Effective tomorrow morning, I'm going to sign a reprieve under my constitutional authority” that will “delay the case for 60 days against both of them.”

“When our clemency board meets in the coming weeks, we'll issue pardons not only for Mike and Jillian but for any Floridian that may have outstanding infractions for things like masks and social distancing,” the governor continued. “The fact is, it's not even right to be wearing masks when you're exercising. The World Health Organization advises against it. It's not healthy to be doing that in the first place, so it was a bad restriction.”

The available evidence suggests that masks played a relatively small role, if any, in reducing the virus’s spread. Early in 2020, the U.S. Centers for Disease Control (CDC) and U.S. Surgeon General Jerome Adams counseled against wearing masks. But the public later learned that health officials actually wanted to discourage the general public from buying masks to conserve the supply for health workers.

These pardons are the latest in a string of conservative actions DeSantis has taken as governor, including legislation banning left-wing critical race theory from public schools, forbidding “vaccine passports” that would coerce Floridians into taking a COVID-19 vaccine against their will, keeping gender-confused males out of girls’ athletic programs, increasing penalties for rioting, limiting social media giants’ power to deplatform their political enemies, and signing an election law that strengthens signature verification for mail ballots and bans ballot harvesting.