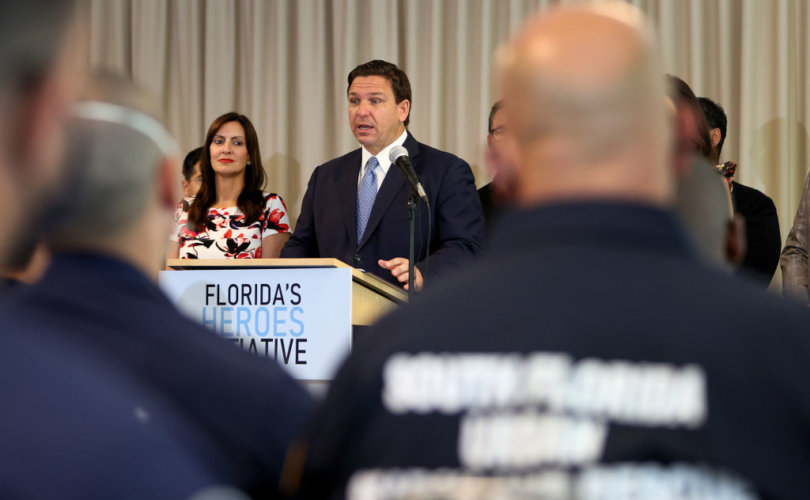 The FRS invests $160 billion in pension funds for active and retired government workers in the Sunshine State.

“The State of Florida will investigate its holdings in Chinese companies and retake control of its shareholder proxy voting from ideology-crazed investment funds,” a December 20 news release from the Republican governor’s office said.

“If you look at how these major companies behave when faced with Chinese disapproval, they censor what the CCP tells them to censor and we see groveling apologies,” DeSantis said. “Go back a generation, and the idea of the American elites was, ‘If we allow China into the WTO [World Trade Organization] and give them most favored nation status, that will make China more like us.’ This experiment has failed and it has endangered our nation’s national and economic security.”

He wants the State Board of Administration and the legislature to agree to statutory language that says the state should not be “entangled” with the CCP.

“When the legislature comes back they can make statutory changes to say that the Communist Party of China is not a vehicle that we want to be entangled with,” DeSantis said. “I think that that would be something that would be very, very prudent. I also think that our country as a whole but certainly Florida would like to see more production and manufacturing re-shored and we would be a great place to do that.”

“By retaking control of the state pension fund’s proxy voting from outside fund managers who may pursue social ideologies inconsistent with the state’s values or the financial interests of the state’s investments, and by determining the state’s exposure to Chinese investments,” DeSantis’ press office said, “the actions taken today will further strengthen Florida’s fiscal footing and signal to those in corporate America who prop up a genocidal, authoritarian, imperialist regime that they will not do so with Floridians’ money.”

The state’s Chief Financial Officer, Jimmy Patronis, said that Floridians should not be subsidizing a country that has taken away American jobs and committee intellectual property theft.

“As Americans got our cheap goods, the Chinese government wasn’t playing by the rules when it came to intellectual property or trade,” Patronis said. “Meanwhile, they’ve been busy buying influence in Hollywood and Washington. Unfortunately, between COVID and the supply chain issues, we’ve seen how reliant our country has become on China.”

“It seems limiting our exposure to China is not only good for our country, but it is the financially prudent thing to do for our state,” Patronis said.

“For far too long, the federal government has not appropriately held China accountable regarding intellectual property, investment and trade rules,” Nuzzo, JMI’s policy director, wrote at the Orlando Sentinel on January 1.

“This hurts our nation and our businesses, but closer to home, it hurts the small businesses that are the backbones of our communities right here in Florida,” Nuzzo wrote.

“Limiting our reliance on a foreign government is a prudent decision and ensuring we do not put Floridians’ hard-earned money and tax dollars into the hands of an authoritarian government that harms its people is a moral choice,” he wrote.

DeSantis wants to reduce CCP influences on higher education, too

Gov. DeSantis has also sought to rein in China’s influence on higher education and, by extension, research conducted at universities.

The Republican governor signed another bill that prohibited state universities from entering into agreements with authoritarian countries that force a curriculum onto the school.

The CCP establishes centers on college campuses called Confucius Institutes under the guise of promoting an understanding of Chinese culture.

The National Association of Scholars said the Institutes are used by the Chinese government to infiltrate “American colleges and universities to enhance its own image.”

There are 30 still in operation in the United States as of December, down from 103 in April 2017.