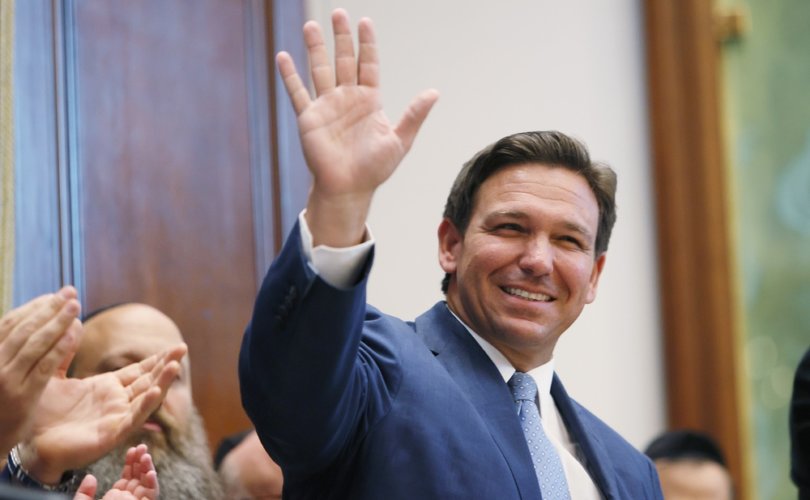 (LifeSiteNews) — When Florida Gov. Ron DeSantis predicted last month that COVID-19 jab mandates requiring Americans to become “fully vaccinated” against the coronavirus would be expanded to include booster doses, he was promptly “fact-checked” for promoting “false” information.

The Florida governor has since been vindicated as governments, businesses, and schools have begun requiring a booster dose to be considered “fully vaccinated.”

During a November 4 press conference in Tallahassee, DeSantis – who many see as a contender for the U.S. presidency in 2024 and who is anticipated to easily win re-election as governor of Florida in 2022 – made headlines when he suggested that “[t]hose individuals who have gone through a normal vaccination series for COVID… will be determined to be unvaccinated very soon.”

“They’re going to tell you: ‘You have to get a booster, otherwise you could face loss of employment or other types of penalties,” DeSantis said.

The Florida governor, who has signed legislation blocking jab mandates in the Sunshine State, was immediately “fact-checked” for his comments and accused of “lying” about upcoming booster mandates.

Weeks later, after the arrival of the highly-transmissible but extremely mild omicron variant from South Africa, government and business leaders seized upon the opportunity to issue a rash of booster mandates threatening citizens and workers with a loss of freedoms if they refuse to get the extra shot.

On December 16, less than eight weeks after DeSantis predicted that those who had gotten their first regimen of COVID-19 inoculations would be required to top up with a booster, New York Gov. Kathy Hochul announced she would introduce legislation seeking to update the definition of the phrase “fully vaccinated” to include a booster shot.

While arguing she would need more data before drafting the new rules, Hochul said “at some point, we have to determine that fully vaccinated means boosted as well.”

Unlike Gov. Hochul, the governor of the most populous American state decided to skip the technicality of updating the definition of the term “fully vaccinated” before pursuing a booster jab agenda.

On December 22 California’s radical Democrat Gov. Gavin Newsom issued a blanket booster mandate for all 2.5 million of the state’s healthcare workers, requiring them to get the third mRNA dose or second Johnson & Johnson jab no later than February 1. Those who refuse would risk losing their jobs.

Newsom said that there are no plans to require other groups of Californians to get the booster shots, but said that could change in the future.

California State Rep. Kevin Kiley, a Republican who ran against Newsom in the state’s gubernatorial recall election earlier this year, quipped the booster mandate “sets a new world record for the time between conspiracy theory and reality.”

Gavin Newsom just announced the first “booster mandate.” This sets a new world record for the time between conspiracy theory and reality.

The nation’s capital has also fallen in lockstep with the booster mandate trend.

On Monday Washington D.C. Mayor Muriel Bowser announced a COVID-19 injection mandate for all government employees, contractors, and grantees, which requires a booster dose and strips out an option to get tested rather than vaccinated, a move Republican Rep. Thomas Massie of Kentucky called an evolution of “medical tyranny.”

The rule is set to take effect January 15, just days ahead of the 2022 March for Life on January 21. Outdoor gatherings have not been prohibited as of yet, however it’s unclear whether the mandate may be expanded.

By mid-December, a bevy of U.S. colleges and universities had also announced they would require students, staff, and faculty to get booster shots. Major institutions that have already required boosters include Harvard, Yale, Princeton, Stanford, Massachusetts Institute of Technology (MIT), and Columbia along with the CalState system in California and some Catholic universities including Notre Dame and Loyola Marymount.

Forbes has predicted that all of America’s top 20 universities will eventually require an extra jab.

On Wednesday CNN reported that according to a survey of 200 major employers conducted last week by consulting firm Garter, roughly percent of employers are already “changing their definition of what constitutes ‘fully vaccinated’ and requiring workers to get booster shots.”

“That’s a roughly one of every six of the 46% of US employers that either have a vaccine mandate in place or plan to institute one,” CNN reported.

The percentage of corporate jab mandates may continue to rise as governments tighten controls on what citizens are allowed to do based on their vaccination status and media outlets gin up anxiety about new coronavirus variants.

Many of the COVID-19 rules and restrictions implemented throughout the United States have paled in comparison with the harsh measures enacted overseas, where Austrians face fines and jail-time if they remain unvaccinated through February and Germany targets the unvaccinated for a discriminatory lockdown which formally segregates them from public spaces.

On December 21, the European Commission announced that COVID-19 jab passports used to travel between countries in the European Union would expire unless updated to contain booster shot records.

According to the Commission, the booster requirement “is a necessity for safe free movement and EU level coordination.”

Today, we adopt a binding acceptance period of 9 months for vaccination certificates for intra-EU travel.

A harmonised validity period for #EUCOVIDCertificate is a necessity for safe free movement and EU level coordination.

The November fact-check of Gov. DeSantis’s apparently prophetic statements concerning the future of booster mandates cited public health experts including U.S. Centers for Disease Control and Prevention (CDC) head Dr. Rochelle Walensky, who had at that time affirmed the original definition of being “fully vaccinated” and said “we’re not examining changing that definition anytime at this point.”

Walensky’s vague statement gave room to permit the CDC to adjust its definition, which, according to reports, the agency is now exploring.

On December 21, Walensky told CNBC that “just being vaccinated with two doses may not be enough,” and that the CDC was “examining” its definition of “fully vaccinated.”

Walensky’s statements come weeks after Dr. Anthony Fauci, who leads the National Institute of Allergy and Infectious Disease (NIAID) and who had waved away concerns earlier this year about possible booster shots, also confirmed the changing definition of “fully vaccinated.”

Speaking to CNN, Fauci said it was a matter of “when, not if” the term “fully vaccinated” is updated to include at least one booster jab.

The scandal-ridden infectious disease expert also said the definition of the phrase is ultimately irrelevant, arguing that whether or not the term is officially redefined, the “optimal protection is going to be with a third shot.”

President Joe Biden has also upped his warnings to unvaccinated Americans, announcing there will be a “winter of several illness and death” for those who haven’t gotten injected with the experimental shots, while pushing all eligible Americans to get a booster dose.

The jabs don’t stop transmission of the virus, but do pose serious health risks in themselves

Moves to push the vast majority of people to get the experimental jabs and top up with a booster come in spite of the fact that coronavirus vaccine trials have never produced evidence that the injections stop infection or transmission, while there is strong evidence to suggest that the “vaccinated” are just as likely to carry and transmit the virus as the unvaccinated.

Moreover, as the CDC reports an infection survival rate of greater than 99.95% for those under age 50, the list of FDA-recognized adverse events has grown from severe anaphylactic reactions to include fatal thrombotic events, the inflammatory heart condition myocarditis, and neurologically disabling disease like Guillain Barré Syndrome, as well as thousands of recorded deaths and permanent disabilities.

As of December 10, there have been 965,841 adverse events connected with the COVID-19 shots reported to the U.S. government’s Vaccine Adverse Event Reporting System (VAERS), including 20,244 deaths, 106,129 hospitalizations, and 33,675 permanent disabilities.

Vaccine-related deaths reported to VAERS had consistently been recorded in the low- to mid-hundreds before the roll-out of the coronavirus drugs.